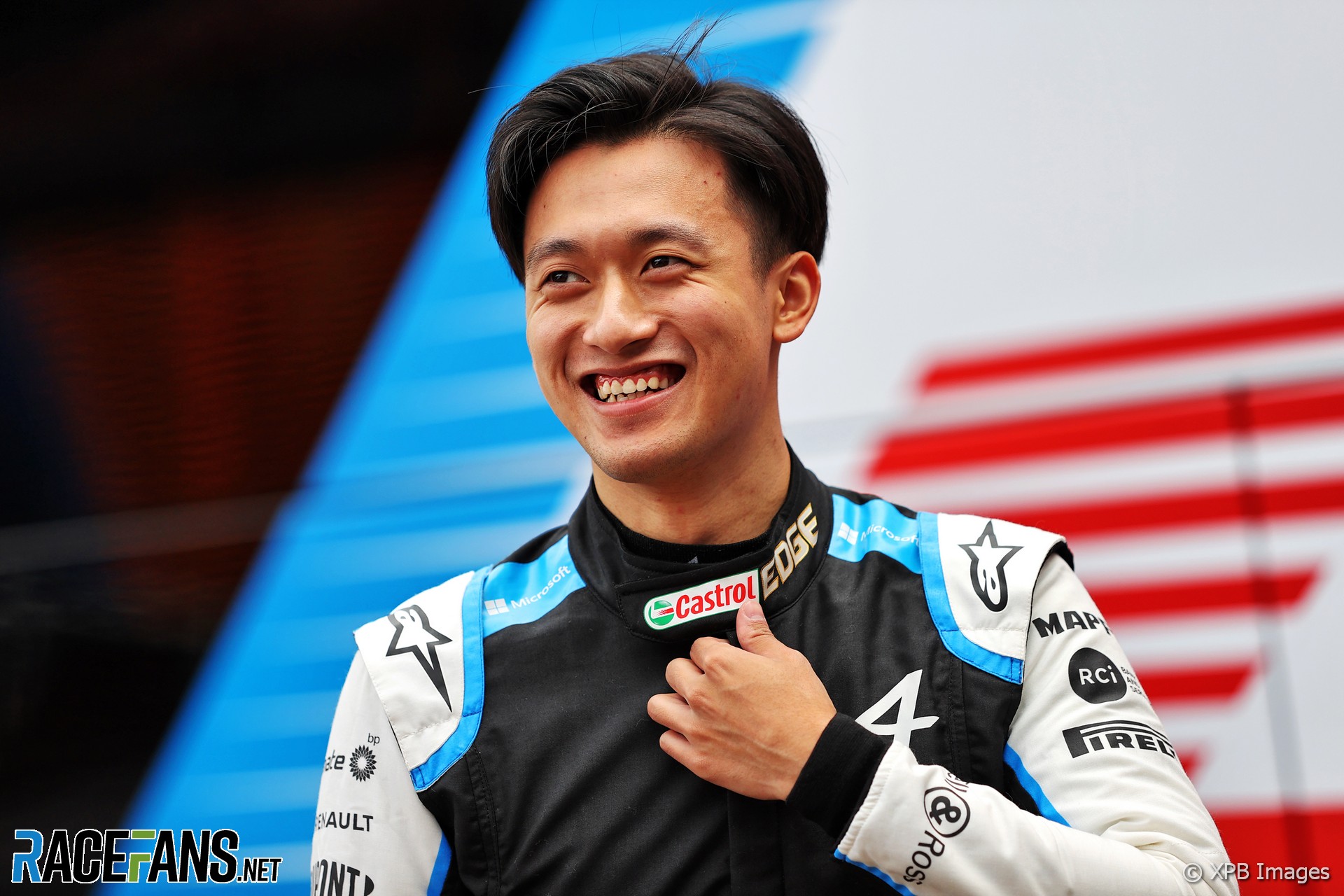 Having completed his driver line-up – and the 2022 F1 grid – by announcing Guanyu Zhou as the occupant of the second Alfa Romeo seat next year, team principal Frederic Vasseur is already pushing to got his new hire in the car as soon as possible.

Zhou already has a handful of F1 test runs thanks to his well-funded place on Alpine’s junior programme, and drove for the team in practice at the Austrian Grand Prix.

But as the only driver to graduate from this year’s Formula 2 field, he will have a significant deficit to his rivals in terms of experience come the start of next season. Vasseur tells RaceFans he is hopeful Zhou will join his team “probably a bit earlier than next year”, in time to participate in the post-season test at Yas Marina.

Like its rivals, Alfa Romeo is gearing up for the challenge of a radically different set of technical regulations next year. Vasseur says that makes it less important to have consistency in its driver line-up from this year to next.

“I’m not sure that we need to have continuity with 2021 because the project is so different,” he explains. “From the tyres to the engine to the aero package, the regulation, everything is different.”

Zhou will have soon-to-be-ex-Mercedes driver, multiple race-winner and veteran of 175 races Valtteri Bottas to learn from next year. “To have someone with the mega experience of the F1 is crucial and I think with Valtteri we have the guy,” said Vasseur. “For Zhou it would be also important to be alongside Valtteri and be able to progress and to learn from Valtteri as fast as possible.”

The appointment of Zhou is a significant moment not just for Alfa Romeo, but F1 as a whole, as he will be the first representative of a country home to 1.4 billion people, plus a rapidly-growing economy the championship is eager to tap into. F1 first raced in China in 2014 and has seen its popularity grow steadily since, though its enforced absence following last year’s Covid-19 pandemic cannot have helped.

Finally having a home-grown competitor in the series should act as a further impetus, even though the 2022 F1 calendar will also lack a Chinese round. Vasseur expects Alfa Romeo’s appointment of Zhou will have a positive effect on the whole sport, including for rival teams.

“It will be a huge push for the team first for sponsors, our exposure over the world and in China,” he said. “But it’s true for the other teams also, I think that it will be beneficial for them and for F1 in general.”

F1 is also believed to have pushed for the promotion of Zhou, whose performance in the junior categories indicated he had the potential to becomes China’s first grand prix driver. Vasseur does not confirm this, but admits “I perfectly understand that Formula 1 could be very happy to have a Chinese driver on board, and mainly [that] the Chinese driver is performing.”

The Alfa Romeo boss reiterates the point that Zhou’s nationality alone will not ensure his transition to F1 is a success. “He will probably bring to Alfa a big push in China but now it’s not just about the fact we have a Chinese driver in the car, you have also to perform because I think the Chinese people are quite proud also, and you have to perform if you want to have a good exposure and positive exposure.”

Vasseur confirms Zhou has a one-year deal with the team with options to extend it for further seasons. But Sauber, which operates Alfa Romeo’s F1 team, has an exciting young talent in Theo Pourchaire waiting in the wings. The 18-year-old is only 22 points behind Zhou in the F2 standings, is still mathematically a title contender, and could be an option for a 2023 seat.

Pourchaire is likely to make practice outings for Alfa Romeo next year alongside another season in F2. “Theo will be part of the academy,” Vasseur explains, “he will be again in F2.”

As Kimi Raikkonen’s two-race absence earlier this year due to Covid-19 demonstrated, the team also needs to have back-up plans in case either of its drivers can’t race, as well as a factory-based driver in the simulator during grand prix weekends. Having completed his race driver line-up, Vasseur can now turn his attention to the rest of the team.

“With the regulations and the circumstances like Covid we need always to have someone [at the] track,” he says. “You never know, you could fail the test on the Friday morning.

13 comments on “It’s not just having a Chinese driver in the car, you also have to perform – Vasseur on Zhou”