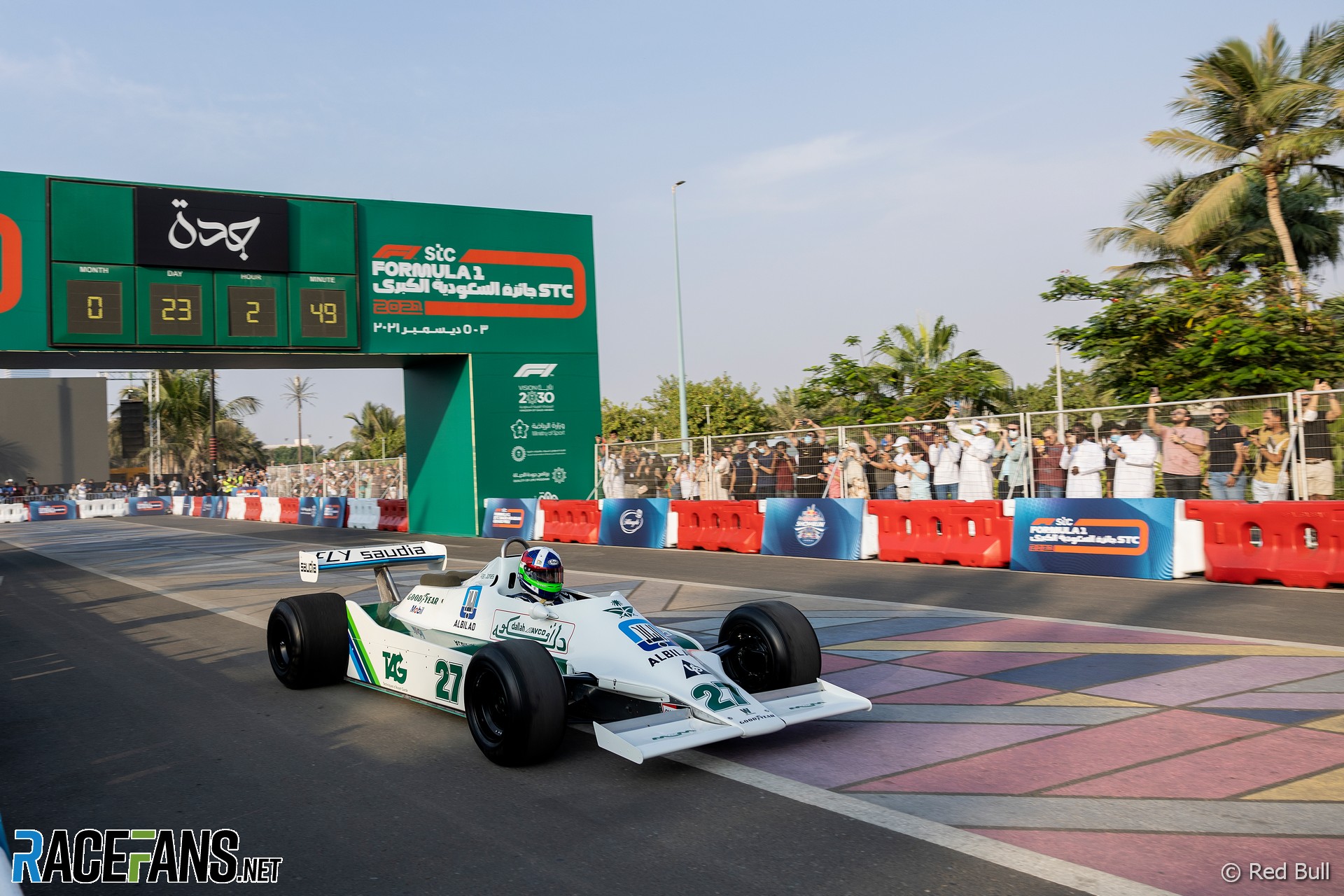 This year’s Formula 1 calendar lists four Middle Eastern venues, six if the Turkish and Azerbaijani races are included, as they should be by some definitions of the region. Yet less than 20 years ago F1 was effectively a fringe sport in the region, followed mainly by petrolheads ex-patriates who had been introduced to the sport elsewhere and were subsequently forced to obtain their fortnightly fixes via magazines and satellite dishes.

True, there had been dabbles by Saudi companies during the seventies and eighties, epitomised by the national airline’s sponsorship of Williams, with associated entities also joining the team’s partner roster. Meanwhile McLaren persuaded the TAG Group to jump ship from Williams and sponsor Porsche turbo engine it had commissioned, with the latter eventually buying into the team.

However, the entries of Arabian entities into F1 were – certainly initially – more down to the enthusiasm of the then-young Prince Muhammad bin Fahd (Saudia) and Mansour Ojjeh, scion of the TAG-owning family than any greater regional aspirations. Indeed, apart from a healthy regional rally championship there was little passion for motorsport in the Gulf despite its plentiful fossil fuel reserves.

The first steps towards the region’s rise to F1 superpower status were plotted in 2000, and not in a paddock or discreet London office but in a supersonic jet cruising above the Atlantic at 18,000 metres. By chance the Concorde flight’s passenger manifest included triple F1 champion Jackie Stewart, who criss-crossed the Atlantic so often he was allocated seat 1A, and Bahrain’s (then) 30-year-old Crown Prince Salman bin Hamad Al Khalifa.

The royal was flying to New York to address the United Nations about his country’s plans to convert from emirate to kingdom. He shared his vision of putting the tiny desert island on the global map as a regional financial hub with Stewart, who suggested a Bahrain Grand Prix as a means of gaining recognition, adding that he could propose the idea to Bernie Ecclestone.

F1’s chief at the time was initially aghast about racing in a desert but warmed once astronomical hosting fees were murmured. Still, having been thought radical by team bosses for adding Malaysia to the calendar, he mandated Stewart to seek unanimous approval; all bar Ferrari’s Luca di Montezemolo bought into the idea.

Stewart and the prince flew to Maranello to persuade Ferrari’s president, to no avail: Ferrari and deserts did not mix, explained the Bolognese aristocrat as he prepared to show them out. As they walked down the steps the Bahraini spotted a photograph of a youthful Montezemolo kneeling beside Niki Lauda’s 1975 world title-winning Ferrari.

“How old were you?” he asked the man who had led the team to its first title in 11 years. Upon being told, “25,” the royal smiled. “Never underestimate youth…”

“You’ve got your race,” said Montezemolo after a pause.

Work on a ‘super-stadium’ circuit began immediately, with the venue hosting its first grand prix in 2004 – a race won, ironically, by Ferrari. In a further twist, a year later Abu Dhabi’s Mubadala sovereign wealth fund acquired a five per cent slice in Ferrari – since sold – while the fund in 2008 bankrolled a giant Ferrari World theme park on Yas Island, also scene of the Abu Dhabi Grand Prix from 2009. Ferrari and deserts do mix…

Last year Bahrain hosted two ‘Covid’ races: one on its traditional grand prix circuit, a second on the ‘outer ring’, with the season ending, as has become traditional, in Abu Dhabi. Thus, three grands prix were staged within three weeks within a radius of 500km – not bad for a region that less than 20 years ago had not seen or heard a grand prix car run in anger.

The original 2021 schedule again listed three fixtures in the Gulf, one in Bahrain (March), the season-closing Abu Dhabi round and a debutante street race in Jeddah, Saudi Arabia scheduled for early December. Nor do Saudi’s aspirations, though, stop there: Qiddiya, a giant entertainment complex and futuristic mega-city is currently under construction around 40km west of the capital Riyadh.

“We’re building [the circuit] so we’re able to host Moto GP events, WEC, regional and national championship events, all the way up to F1. A Grade One licence is synonymous with F1, so we’re hopeful it comes to pass for us,” said a Qiddiya spokesperson. Then consider: where is the Dakar Rally staged? Where did Extreme E host its first event? Saudi has also hosted Formula E.

Despite denials its headquarters could be relocated to Dubai, it not inconceivable that the FIA could establish a base there – Emirati Mohammed bin Sulayem has announced his candidacy in the race to succeed Jean Todt as president of the global motoring organisation. Insiders suggest the 14-time Middle East rally champion enjoys backing from not only his government and regional clubs, but also from several African and Asian motoring organisations. Thus, he could be elected as first non-European FIA president.

The pandemic has, though, facilitated yet another Gulf F1 race this year, saliently one (unexpectedly) staged this weekend, a fortnight before Saudi’s inaugural grand prix: In Qatar on the Losail International Circuit better known for night Moto GP races the venue staged from 2008, a year before F1 got in on the spectacle. Announced a month ago, the race plugs the gap caused by cancellation of Australia’s round.

Significantly, Qatar’s sovereign wealth fund holds an effective 17% of VW Group, providing the country with sufficient clout to influence board decisions such as the current debate as to whether Porsche and Audi should enter F1; if so, in which form – as engine supplier or full team.

Indeed, cynics suggest a Qatar Grand Prix is a sweetener for board members, no doubt aware that Bahrain’s sovereign wealth fund Mumtalakat, Saudi-owned TAG Group and that country’s Public Investment Fund collectively hold 70% of the supercar manufacturer and F1 team’s equity. Equally, Kuwait’s fund owns 6,8% of Mercedes parent company Daimler; on that basis Kuwait could well be the next F1 host…

Qatar’s inclusion kicks off a trilogy of Gulf F1 events, making for a quartet of F1 grands prix in the Gulf region in a year, effectively one per 10m inhabitants across four countries, akin to Britain hosting grands prix in England, Scotland, Wales and Northern Ireland or the USA one in every second state. This Arabian theme is due to continue for the foreseeable future: Bahrain and Saudi Arabia open the 2022 season; Yas closes it.

Then, Qatar makes a return in 2023 – for ten years – having elected to sit out next year due to its hosting of the FIFA World Cup. The question is: Given this crowded marketplace what does Qatar, which previously set itself apart from other Gulf countries by embracing Moto GP rather than F1, hope to gain from its long-term F1 commitment, regardless of any move(s) by VW Group to enter the sport.

For starters, Qatar plans to capitalise on its 2022 FIFA World Cup commercial and hospitality infrastructures and experiences by hosting a truly global events on an annual basis, a box only partially ticket by Moto GP, which records more modest TV and audience figures – evidenced by the fact that the Losail circuit had just 7,500 grandstand seats whereas for this year’s F1 event that figure is being upped four-fold despite the short ticket sales window.

Post-World Cup Qatar plans to position itself as a global sport management and marketing centre and having the world’s largest annual sporting block visit the desert peninsula creates enormous credibility and commercial opportunities, far more than, say, Moto GP does and could – which, forget not, has visited the country since 2004 yet has thus far failed to gain traction at other circuits in the region.

Although criticism has been aimed at Losail circuit, which previously successfully hosted WTCC and GP2 rounds, for being compact and in many aspects ‘non-F1’ for being narrower and less spectacular than circuits in neighbouring states, the key factor is that the event stepped into the breach created by the cancellation of the Austrian round at extremely short notice and thus makes no excuses for its lack of certain facilities.

Frankly, though, without Qatar the season would probably have been a leg shorter and who would want that situation at this stage of the title battle? Apart from expanding grandstand seating and garage and hospitality areas for the event, the circuit was also required to substantially upgrade the on-track installations to make them suitable for F1; thus (much-derided) sausage kerbs have been installed and TecPro and other barriers erected.

That said, RaceFans understands the Qatar Motor and Motorsport Federation, which first evaluated hosting an F1 grand prix in 2014 and subsequently revisited the topic on numerous occasions, has plans to host the 2023-onwards events either on a coastal street circuit cutting through Doha or on a bespoke F1 facility on the outskirts of the capital – pointing to a massive future commitment towards F1.

A new lighting system, said to be the most advanced in the world in terms of sustainability and lumens was installed earlier this for what will be a twilight race starting a 17:00 local time. True, it was installed as upgrade for the Moto GP system but with F1 in mind. That factor is key to this weekend: Although a stopgap event, it had been a long time in the planning and that shows in Losail’s readiness at such short notice.

The lighting system uses failsafe ‘blocks’ of lights and backup generators which are alternately connected to prevent a total blackout, with all parts of the track remaining sufficiently illuminated in the event of failure within the system, which draws on 1,000 lamp posts and 3,600 floodlights connected to 44 13-megawatt generators via 500km of cable to provide sufficient light to illuminate 70 football stadiums or 3,000 medium-sized homes.

Thus, the eyes of all F1 fans will be on Qatar this year, with Losail hoping to enter the record books with a sparkling continuation of the Max Verstappen–Lewis Hamilton and Mercedes-Red Bull battles (listed in championship sequence), hopefully with even more twists and turns than were experienced in Austin, Mexico City and Sao Paulo.

One thing is sure: Qatar could not have chosen as better season to makes its F1 debut. From there the circus moves around 1,000km to the next venue and then the same distance to the finale. Not since the end-of-season battles were fought out in Europe – in 1984 – have the final three races been held in one geographic region, yet the Middle East did so a year ago and does so again over the next month.

Whether (or not) the Middle East would, though, have embraced Formula 1 to the same extent without a chance meeting between a triple champion and crown prince aboard a Concorde flight – or even without the ‘youth’ comment to Montezemolo – will never be known. Whatever, the outcome certainly put Bahrain on the global map, with the rest of the region following in the island’s slipstream.

Is there a single F1 fan who has not heard of Bahrain? Or of Abu Dhabi, for that matter? Now it’s Qatar’s turn. Next, Kuwait?

Clearly, then, the Middle East has evolved into prime F1 territory and the sport’s coffers would be massively depleted – to the tune of around $300m per annum, a sum unlikely to be replaced by other sources at anywhere near the same values in the short term, if at all – and thus, regardless of the region’s politics, F1 will increasingly embrace the Middle East in future. Qatar is F1’s latest addition to the Gulf’s F1 roster, but it is unlikely to be the last.