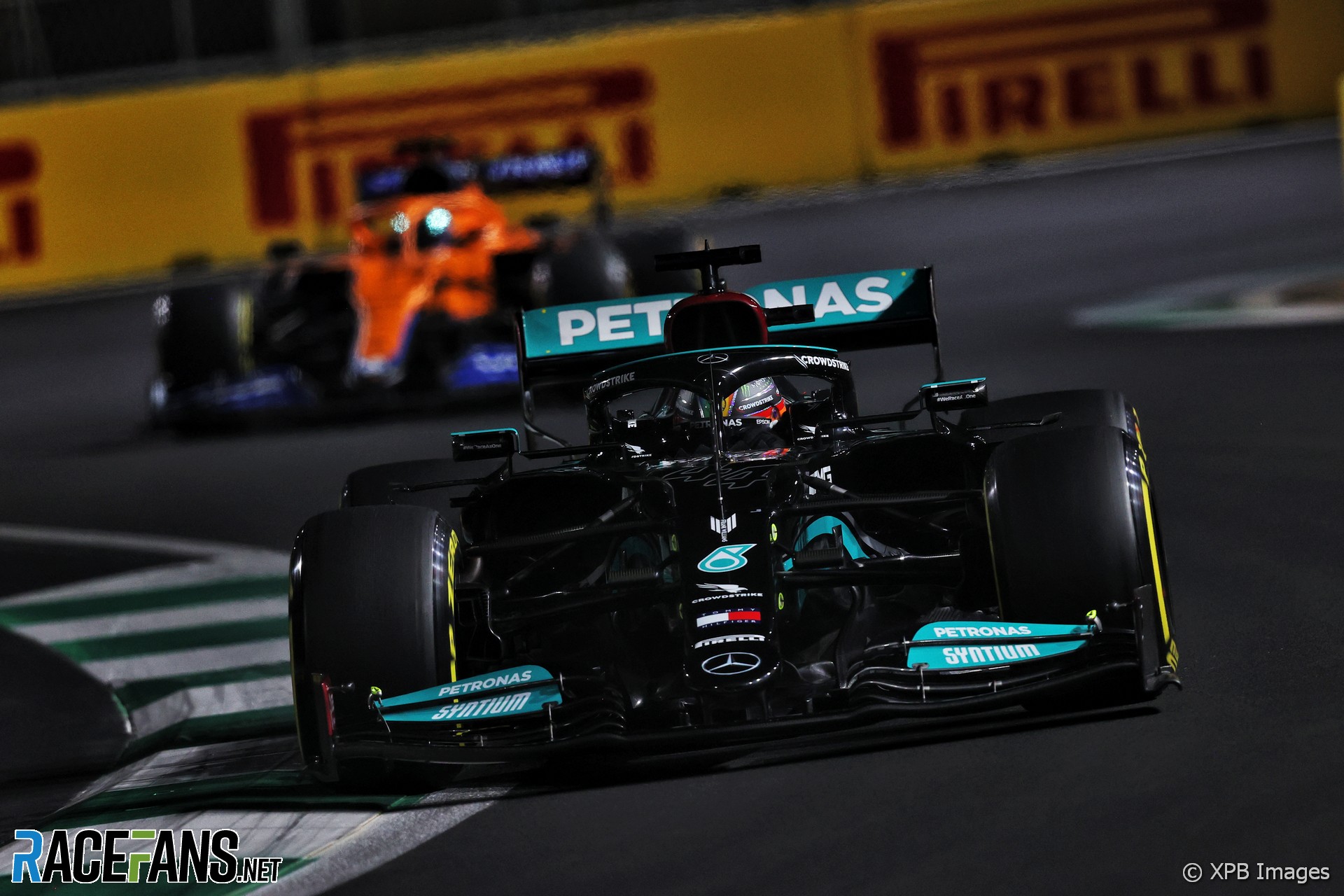 The championship leader was up by two tenths of a second against his rival in the second sector, but a mistake at turn 27 saw him clip the wall, forcing him to stop on circuit.

Hamilton will line up on the front row on the grid alongside Mercedes team mate Valtteri Bottas. Despite the accident, Verstappen takes a provisional third place on the grid, but it remains to be seen whether he will require a replacement gearbox which would lead to a penalty.

Traffic was the major concern for all 10 teams as the busiest of the three qualifying sessions began under artificial lights.

With drivers having been told by race director Michael Masi they could only slow down after turn 25 in the final sector to give themselves a gap to cars ahead, George Russell became the first driver to blast past a queue of cars on the run to the final corner.

Red Bull were the early pace-setters, with Max Verstappen and Sergio Perez sitting on the top of the times. That was until Lewis Hamilton went quickest from his team mate, Valtteri Bottas.

With heavy track evolution, times tumbled over the course of the session as teams found more confidence with the soft tyres. Carlos Sainz Jnr briefly jumped to the front in the Ferrari, before Sergio Perez went quickest overall.

In the dying moments of the session, Max Verstappen’s final flying lap was ruined when he came across a melee of slow cars around the last corner.

“Max, there’s too many cars, just back out, there’s too much risk,” Verstappen was told by race engineer Gianpiero Lambiase. “Fucking hell. Can I box? Holy shit,” came the reply from Verstappen.

After having had a late engine change in his Mercedes due to a fuel leak prior to qualifying, Valtteri Bottas reported a misfire in his power unit before pitting on his final run. Bottas came to a halt in the entry of pit lane, his Mercedes mechanics having to push the car clear.

Despite the concerns over traffic, the session completed without any red flag interventions or even yellow flags. When the chequered flag flew, the two Haas drivers of Nikita Mazepin and Mick Schumacher were eliminated first, with the two Aston Martins of Lance Stroll and Sebastian Vettel knocked out in 18th and 17th, respectively. Nicholas Latifi was the final driver to miss the cut in 16th.

An incident involving Pierre Gasly and Carlos Sainz Jnr was investigated by the stewards after the AlphaTauri appeared to impede the Ferrari through turn three.

With the harder compound tyres expected to work better for the race than the softer tyres, reaching Q3 on medium tyres was a key aim for the front runners heading into the second session.

Verstappen’s first effort on the medium tyre was also the first to break through the 1’28 barrier all weekend, with Hamilton only able to manage a lap seven tenths of a second slower than his championship rival.

Sergio Perez moved to second with a 1’28.175, before Hamilton’s second effort on the medium tyres saw him take the position and move within just over a tenth of Verstappen. Perez improved on his next run, taking the overall fastest time, seven-thousandths quicker than his team mate.

Carlos Sainz Jnr had a high-speed spin through the turn 9-10-11 complex, but somehow managed to avoid contact with the barriers. The Ferrari driver had to pit for new tyres and minor repairs, leaving him with only one lap to safely secure passage to Q3. A mistake at the same corner put paid to any chances of further progression for Sainz.

Hamilton improved his time on his eight-lap old medium tyres to go fastest, while Verstappen opted not to set a lap on new soft tyres in the final minutes.

With Sainz unable to set a representative time, an opportunity opened for a driver to snatch a place in Q3. That opportunity was taken up by Antonio Giovinazzi, who secured a Q3 appearance with tenth place at the chequered flag despite clipping a wall.

That left Daniel Ricciardo as the first driver eliminated from the second session, with Kimi Raikkonen out in the second Alfa Romeo in 12th. Fernando Alonso was knocked out in 13th, ahead of George Russell in the Williams who will line up 14th on the grid.

Bottas and Raikkonen had a minor collision exiting the long turn 13 corner, with the Mercedes’ right-front clipping the left-rear of the Alfa Romeo. Lando Norris also complained that Perez had held him up in the final corner during one of his early runs.

Once again, the fight for pole position appeared to be a straight shootout between the two championship protagonists.

Mercedes were the first to take to the track, looking to take advantage of the clear circuit. But Hamilton blew his first attempt when he also lost control of his car sweeping through turn nine, having to abandon his lap.

Hamilton built up for a second lap and was able to go provisionally fastest on a 1’28.035 – just over a tenth faster than team mate Bottas. But that was immediately eclipsed by Verstappen, who lowered a 1’27.653 to take the top spot with a superbly clean and composed effort.

Bottas’s second attempt of the session moved him ahead of his team mate into second place, while Sergio Perez sat in fourth place before he was demoted by Gasly’s AlphaTauri.

Hamilton opted to make an early final run and despite having to scythe his way past slower cars he was able to take provisional pole by a tenth ahead of a second over Verstappen.

In response, Verstappen strung together a dramatic lap in the closing moments, going over two tenths quicker than anyone through the first two sectors. But entering the final corner of turn 27, Verstappen locked up his left-front wheel and ran wide, clipping the barrier on exit with his right-rear tyre and pitching him back into the wall.

As Verstappen’s Red Bull lay stricken on the exit of the corner, the yellow flags prevented anyone else from improving their times. That saw Hamilton secure pole position, with Bottas making it an all-Mercedes front row.

Verstappen takes a provisional third on the grid, but the threat of a grid penalty for a replacement gearbox may loom over him. Charles Leclerc took fourth on the grid for Ferrari, ahead of Perez in fifth and Gasly in sixth.