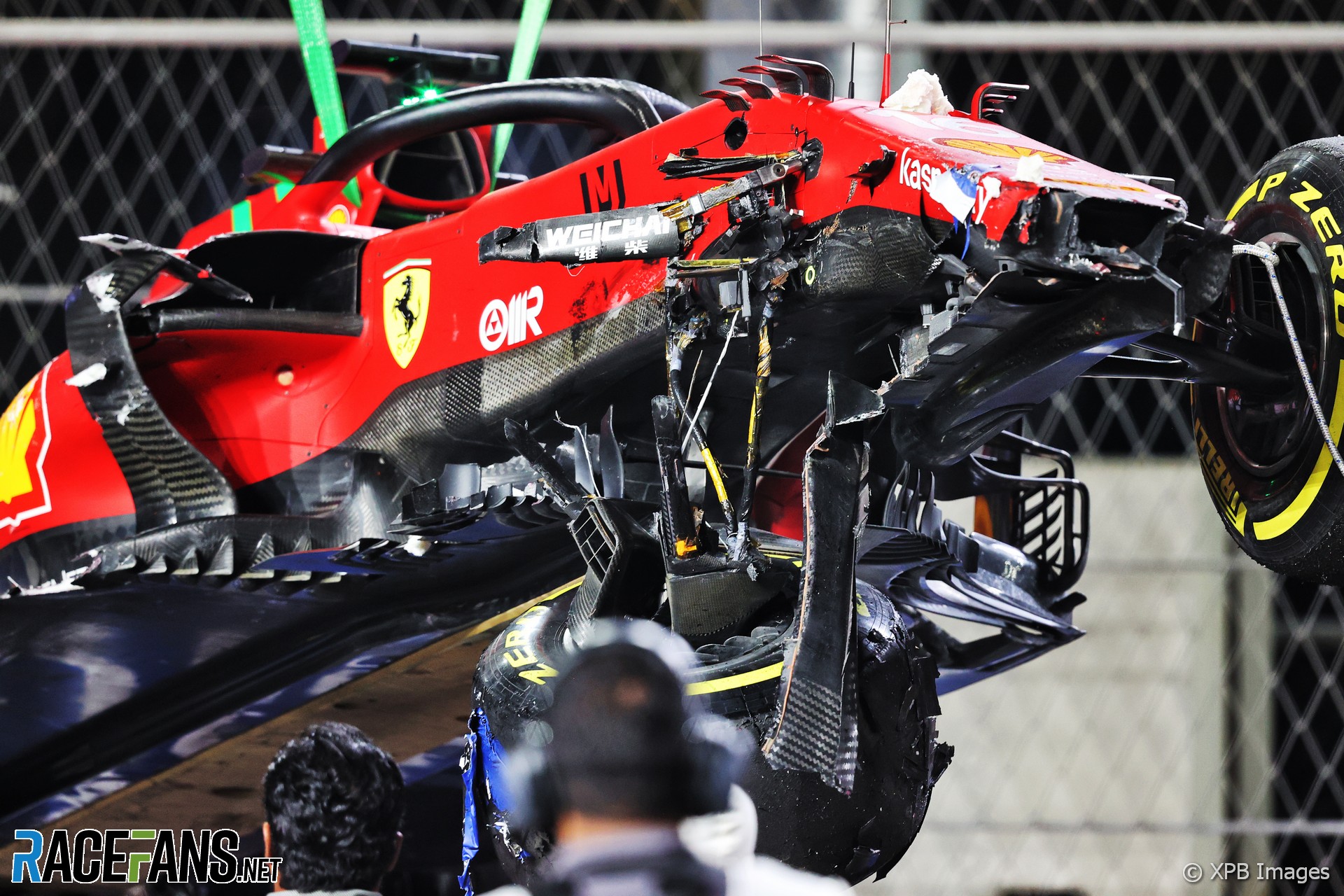 In the round-up: Charles Leclerc said his second practice crash was regrettable but sees potential in Ferrari’s pace in Jeddah.

The Ferrari driver’s Friday ended with a heavy crash into barriers at Jeddah’s turn 22. He said it was “a day that unfortunately did not end up the way we would have wanted.”

“I am sorry for the team who will have to put in a lot of work to have the car ready tomorrow and I will do everything I can to bring home the best possible result to thank them,” Leclerc added.

“On the upside, we ran through our planned programme and completed all the tests we wanted to in our two sessions,” he said. Leclerc believes “the potential is there” for Ferrari to have a good weekend.

Despite his heavy shunt, Leclerc said he “really liked the track itself” and “the best part to drive is around the high speed section.”

“It is, however, unforgiving and there is no room for any mistakes. The most challenging part is getting into the right rhythm with all the blind corners there are. But, as soon as you do, it’s even more exciting to drive.”

Vasseur wants team to be opportunistic

Alfa Romeo team principal Frederic Vasseur says his team need to be prepared to take advantage of any opportunities which come their way in Jeddah. But he admitted that hasn’t been their strong point previously this year.

“So far, we are not the most opportunistic in the field,” said Vasseur. “But we will have to turn it. We had good pace this morning, decent pace this afternoon. But we have to be there.”

He said the Hungarian and Belgian grands prix were examples of races where they failed to capitalise on chances to score points. “We missed in Budapest and Spa. If we are in a good position and the race is a bit more chaotic than usual, we could score good points.”

Alessio Deledda has been permitted by the stewards to take part in the rest of the Formula 2 race weekend despite failing to set a time in qualifying. The HWA driver missed the session after he crashed in free practice, leaving his car with damage which his team were unable to fix in time for the second session of the day.

The stewards determined that his laptime of 1’48.867 from free practice was sufficient to take part in the races. He will start sprint race one and the feature Race from the back of the grid in Jeddah.

Deledda previously failed to lap quickly enough to qualify in Monaco, but was nonetheless allowed to participate.

The extent of the damage caused to Nikita Mazepin’s car by his kerb strike during the Qatar Grand Prix weekend came as a surprise to team principal Guenther Steiner.

“It’s just on the bottom, it’s pretty badly damaged,” he said. “I’ve seldom seen a car, a chassis, damaged like this going over kerbs. It’s now back in Europe to be put together again.”

Dalton Kellett has re-signed with AJ Foyt Racing to continue to drive the number four IndyCar in the 2022 season. Kellett finished the 2021 season 23rd and last out of the series’ full-time drivers.

Even F1 drivers can’t beat the traffic. Give us a wave @Max33Verstappen! #F1 #SaudiArabianGP pic.twitter.com/CXkjLIjn5Z

These cool down laps and slow out laps are absolutely sketch. FIA has got to get on top of it, too many close calls already and we’re not even into qualifying yet. #F1

A sign of appreciation from all of us at Pirelli to @JeanTodt, on his last @F1 race as @fia President: his personalised Pirelli wind tunnel tyre! Merci Jean. pic.twitter.com/YNKDOB5Qhe

The FW07 will be on track at Jeddah this weekend, originally because of it's Saudia livery and now also poignantly in tribute to Sir Frank Williams, who agreed the deal, leading to @WilliamsRacing's first driver's (with Alan Jones) and constructor's titles #F1 #SaudiArabianGP pic.twitter.com/KZGVWyPyhT

"The 2020 Spanish Formula 4 champion Kas Haverkort has signed with Van Amersfoort Racing for his second Formula Regional European Championship by Alpine season in 2022."

"A bidding war erupted Friday for a Formula One racing project featuring bold-faced names that has studios and streamers burning rubber to get their gloves on it."

I would say that more hinges on Ocon’s performances than Alonso’s. If Ocon does really well next year and beats Alonso, that may force Fernando into retirement and Oscar take his seat. On the other hand, if Ocon gets smashed by Alonso, Fernando could continue and Esteban get dropped for Piastri.

If the latter happens, Alpine would be left with a dilemma of who replaces Alonso if he retires after 2023 (which seems most likely with his recent comments).

With what Piastri has shown this season, Alpine need to be careful with him, as if he doesn’t get promoted to F1 in 2023 there probably could be a risk that they lose him to other teams. Mercedes will need someone to replace Hamilton in three to four years.

We don’t know how long Seb may continue with Aston. Red Bull/AlphaTauri will have a gap to fill if Gasly leaves, Tsunoda doesn’t improve and the likes of Lawson, Vips and Hauger can’t put up a championship challenge in F2.

Alpine have some very important decisions to make.
Joshua Miles