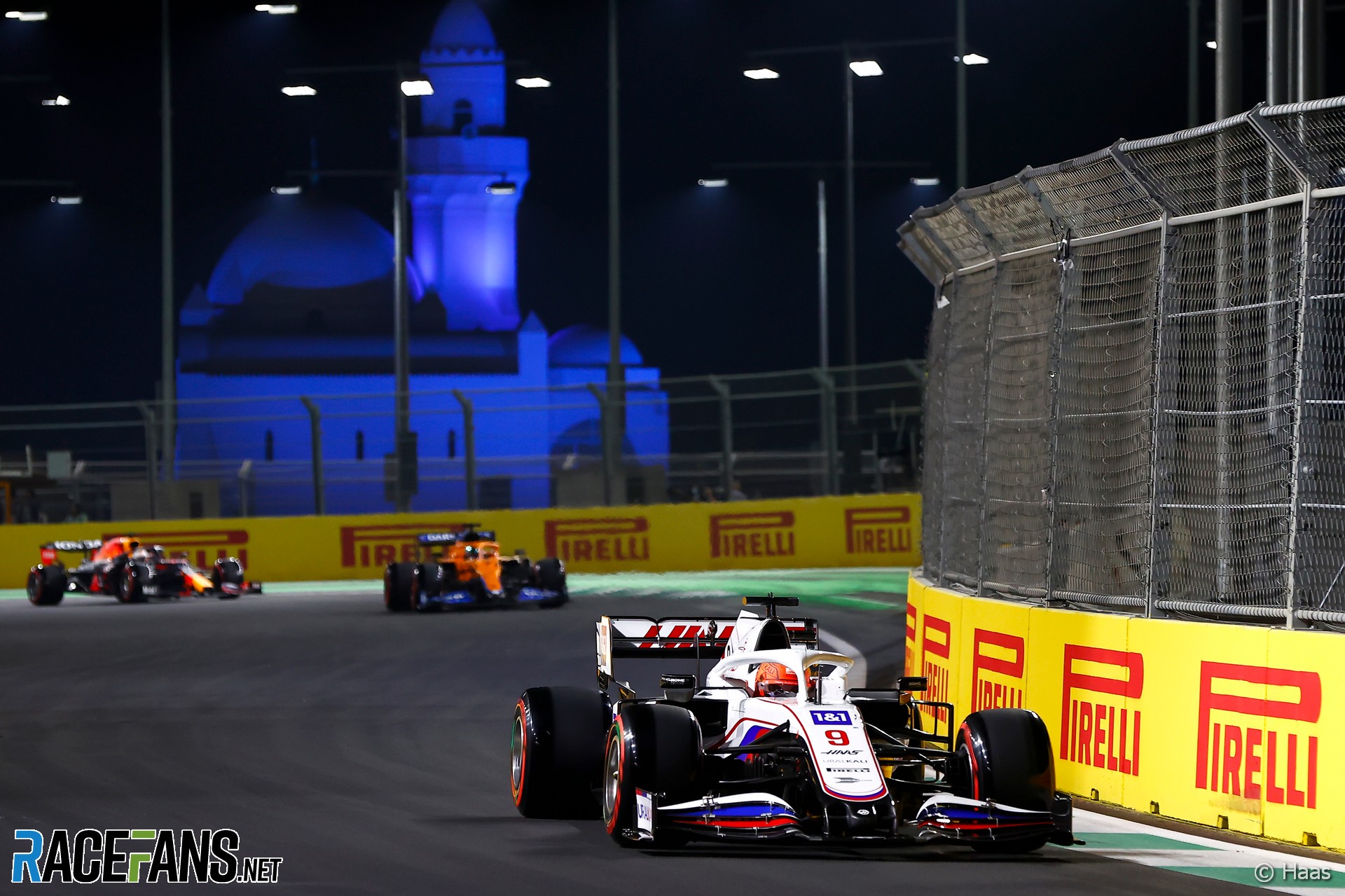 Nikita Mazepin said he is glad Lewis Hamilton faced no penalty for the incident between the pair in third practice.

Hamilton was summoned to the stewards for holding up Mazepin in the second half of yesterday’s final hour of practice ahead of the Saudi Arabian Grand Prix. The Haas driver had to go over kerbs at turn eight in order to avoid a collision.

“I was on a fast lap and I was going through turns seven and eight, which are flat in our car,” explained Mazepin. “They’re all blind and I didn’t know that there was a car on the racing line, so I kept it flat until a moment I saw he was not going to move from it.

“It was not a big deal from my side. We train to have the reactions necessary to avoid these kind of situations.”

The pair swapped messages following the incident, Mazepin revealed. “Lewis has been very nice and we sent each other texts about that. I just hoped that he had a good qualifying and he did, as always. So that’s the main thing.”

“He felt very sorry for what happened and he said it wasn’t the best job done from their side,” Mazepin added. “It’s really nice to see the experienced and older generation really paying attention to these things because in F2 you might never get driver thinking about it whereas in F1 a seven time world champion is so that’s really kind from him.”

Hamilton was given a reprimand for the incident, and Mercedes were fined €25,000, after the stewards ruled the driver had been given insufficient warning Mazepin was approaching.

Mazepin said he believed this was the right outcome. “I really like Lewis and I really wish him all the best that I can in his title fight, and I wouldn’t want him to be penalised for something that was together with me.

“I’m in my first year in Formula 1, he was probably focussing on his steering wheel adjustors and thinking how to find the bit of lap time before qualifying. So if the cost was for me not to complete one of my laps in FP3, so be it.”

The Haas driver admitted he let off steam in the cockpit following their high-speed near-miss. “You have maybe one or two swear words come out because we really put everything on the line for that lap and then it doesn’t come along, but I had experience in this.”

In their verdicts on Hamilton and Pierre Gasly, who was given a warning for a similar incident, the stewards pointed out teams must ensure their drivers are warned when other cars are catching them because of they many fast and blind corners at the Jeddah Corniche Circuit.

“You don’t have a chance to rely on your mirrors, you rely on your engineer,” said Mazepin. “And an engineer is not a robot, he’s a human and he’s got so many jobs to do as well as telling you where you are on-track and sometimes he doesn’t tell you in the right moment that somebody is coming at a speed of 250[kph].

“So the people as engineers really don’t deserve the criticism for it. And in my case, I was always happy to take the blame.”