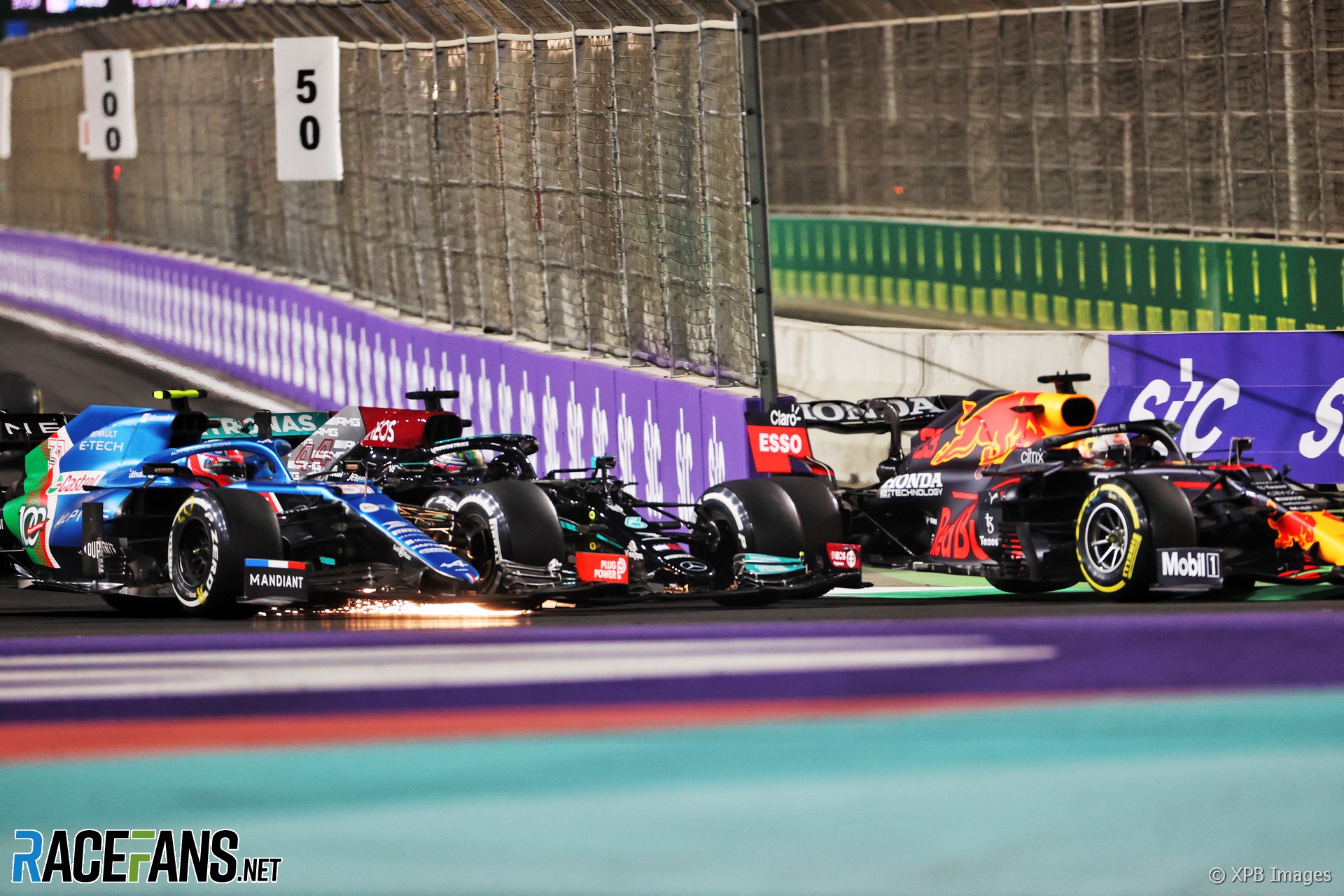 Lewis Hamilton won the inaugural Saudi Arabian Grand Prix and drawn level with championship rival Max Verstappen with just one race left in the 2021 world championship following a bad-tempered scrap between the pair.

The greatest flashpoint of the season happened on lap 38, shortly after a Virtual Safety Car restart. Verstappen overtook Hamilton around the outside at turn one at the Jeddah Corniche Circuit, but could not stay on track. In trying to redress, Hamilton tucked in behind Verstappen approaching turn 27, Verstappen appeared to slow suddenly, and the two made contact.

Hamilton suffered minor front wing damage, and Verstappen was given a five second time penalty for leaving the track and gaining a lasting advantage. Hamilton took the lead back from Verstappen on lap 43, and drove away to his third win in succession.

Verstappen maintained second place after the time penalty, falling away from Hamilton in the final laps. By setting the fastest lap of the race, Hamilton gained eight points on Verstappen – bringing both drivers to 269.5 points going into next weekend’s Abu Dhabi Grand Prix.

The inaugural race in Jeddah will be remembered as a rather calamitous race on the whole, after two red flags for major incidents, and multiple virtual safety car interventions for incidents and debris on the racing line.

The first red flag was for TecPro barrier repairs at turn 22, when Mick Schumacher spun off and crashed. Initially the safety car was deployed, and Verstappen stayed out on track while Hamilton and Valtteri Bottas pitted from first and second for hard compound tyres. The red flag was thrown on lap 14, allowing Verstappen to change to medium tyres.

On the ensuing standing restart, Verstappen started from first, but Hamilton got a better launch off the line. Hamilton ran wide through turn one, forcing Verstappen off track, and Verstappen took the lead ahead of the Alpine of Esteban Ocon, who had launched from fourth to second. Behind them, contact between Charles Leclerc and Sergio Pérez triggered a multi-car accident that took Pérez out of the race, along with George Russell and Nikita Mazepin. This brought out the second red flag.

After heated debate, and even bargaining between FIA race control, Mercedes, and Red Bull, Ocon was placed at the front for the next standing restart, with Hamilton in second, and Verstappen moved back to third for leaving the track and gaining an advantage. On the medium tyres, Verstappen launched into the lead with a forceful block pass into turn one. Hamilton would make light contact with Ocon, but eventually settled into second, pursuing Verstappen for the lead.

On lap 23, Sebastian Vettel was hit by Yuki Tsunoda, the incident and debris on track brought out a virtual safety car. Vettel would come to blows with Kimi Raikkonen on lap 28, and their collision necessitated another, longer VSC intervention.

Over the line, Bottas used DRS to snatch third place from Ocon by just 0.102 seconds. Daniel Ricciardo finished in fifth, ahead of Pierre Gasly in sixth, then the Ferraris of Leclerc in seventh and Carlos Sainz Jnr in eighth. Antonio Giovinazzi scored points for Alfa Romeo in ninth, and Lando Norris took the final championship point in tenth.