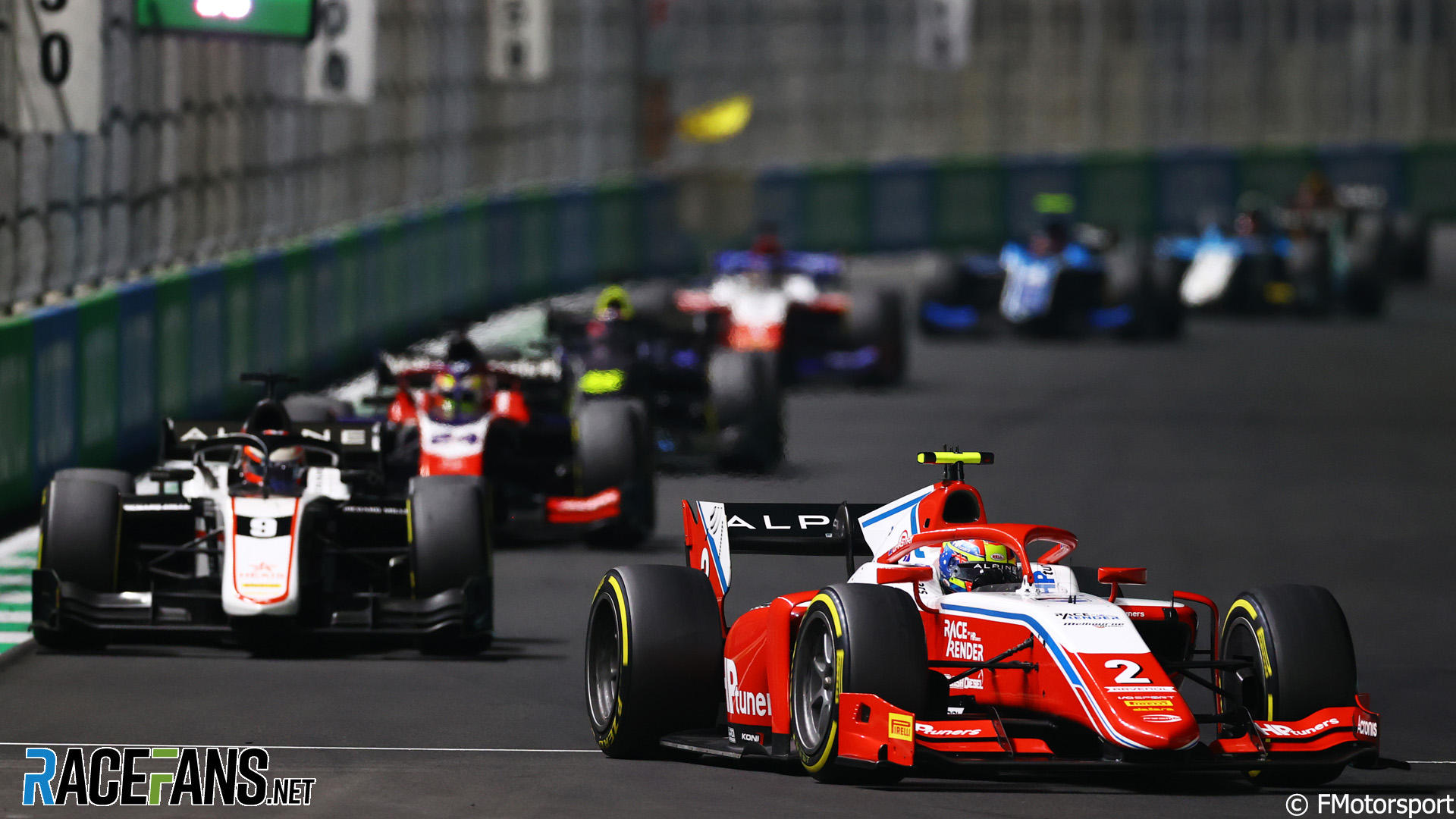 The Jeddah Corniche Circuit was inaugurated for racing on Saturday with two Formula 2 races, each providing the usual thrills and chaos of the junior series.

It also gave some clues as to how the first Saudi Arabian Grand Prix at the circuit will unfold later today, including whether overtaking will be possible, and how the stewards are likely to respond to incidents.

Formula 1 drivers were taking note, with Haas’s Nikita Mazepin watching the second race – which took place in night-time conditions as the Saudi Arabian Grand Prix itself will on Sunday – on the pit wall with the Hitech team he drove for in F2 last year.

The main focus of interest was the run from the grid to the first corner, which will potentially be the best overtaking opportunity for F1 drivers on the opening lap and beyond. There were some conflicting comments as to which side of the grid made for better starts in F2 cars. But where rubber was laid down close to the first corner the grip levels varied noticeably depending on which line was taken.

Several F2 drivers cut that corner. Some didn’t even get there in one piece as crashes into the barriers towards the end of the pit straight led to out-of-control cars wiping out the unfortunate ones ahead of them.

F1 drivers expect a more orderly start to their race. Lando Norris doesn’t believe the complex requires an especially cautious approach. “I think it’s the same as every track, to be honest,” he said. “I don’t think it’s too different to most circuits, I would say. And I just hope the level of drivers [in] F1 is slightly higher than the ones in F2. I think that’s the main thing.”

His team mate Daniel Ricciardo concurred. “There’s enough run-off and stuff, so I don’t think it poses any further risks than some other tracks.

“The grid is fairly far forward, so the speeds up to braking for turn one are not that high. So that’s probably sensible. There’s still been some incidents, but I don’t foresee it being any crazier than some other places.”

Many of the attempted passes there in F2 resulted in drivers cutting of the corner and laid down a precedent of what to expect from the stewards today. Five-second time penalties were dished out to drivers perceived to have gained an advantage after leaving the track, usually by not conceding a position they had at the apex of the corner.

This had a significant impact on the F2 results, and while you would expect the F1 pack to be more spread out and not as susceptible to small penalties leading to large drops in positions, a late Safety Car period could easily bunch the field together and lead to just that.

One element that wasn’t tested out in F2 is how drivers exiting the pit lane after a stop will filter back into the action at turn two and then get through the next corners on cold tyres if there are cars behind. The pit lane exit was extended slightly following Friday practice.

The next crunch point after turn one is turn four, another left-right section with run-off where drivers attempted moves in F2. There was typically less of a difference in grip levels here, so less locking up and skating off, but as F1 cars are wider it is unlikely to be an overtaking spot in the grand prix.

Having slightly less downforce than an F1 car meant the F2 pack could follow each other fairly closely through the next sweeps and then get a slipstream to the banked turn 13. The closeness of pace of the cars and their narrower width meant they could comfortably go two-wide at the corner, but this didn’t actually make it much of an action spot.

Drivers could go two-abreast, but tended to emerge in the same order exiting the corner as they entered it. The exit of the corner proved slightly too challenging for some as it flattened out again, and there were a few solo crashes. But again the higher speeds and wider profiles of F1 cars is unlikely too make this corner an issue in the same way, making this less of a potential action spot.

The second and third sectors of the lap were not overtaking-free zones in F2 – just ask Carlin’s Dan Ticktum after he attempted the inside and outside at most corners. Overtaking appeared incredibly scarce from what was shown on television and more of the action came from drivers having the rear-end step out on their own and causing big crashes at turns 14 and 22 in particular.

The lap ends with a long curve which runs between the lake and the Red Sea, and then the final heavy braking zone into turn 27, where Max Verstappen crashed in F1 qualifying. The DRS effect will be very strong on the lengthy acceleration zone to that corner, but there will likely be DRS trains for F1 and if a pass is completed on the inside before reaching the lap-ending turn 27 (only two F2 drivers attempted the less grippy outside of that corner under braking), then the DRS should then be available for the passed car to go straight back by down the pit straight.

There was a certain magic to Saturday night’s qualifying session, but with a track getting increasingly gripped up on the racing line it looks like Jeddah will be providing single-lane action from start to finish.