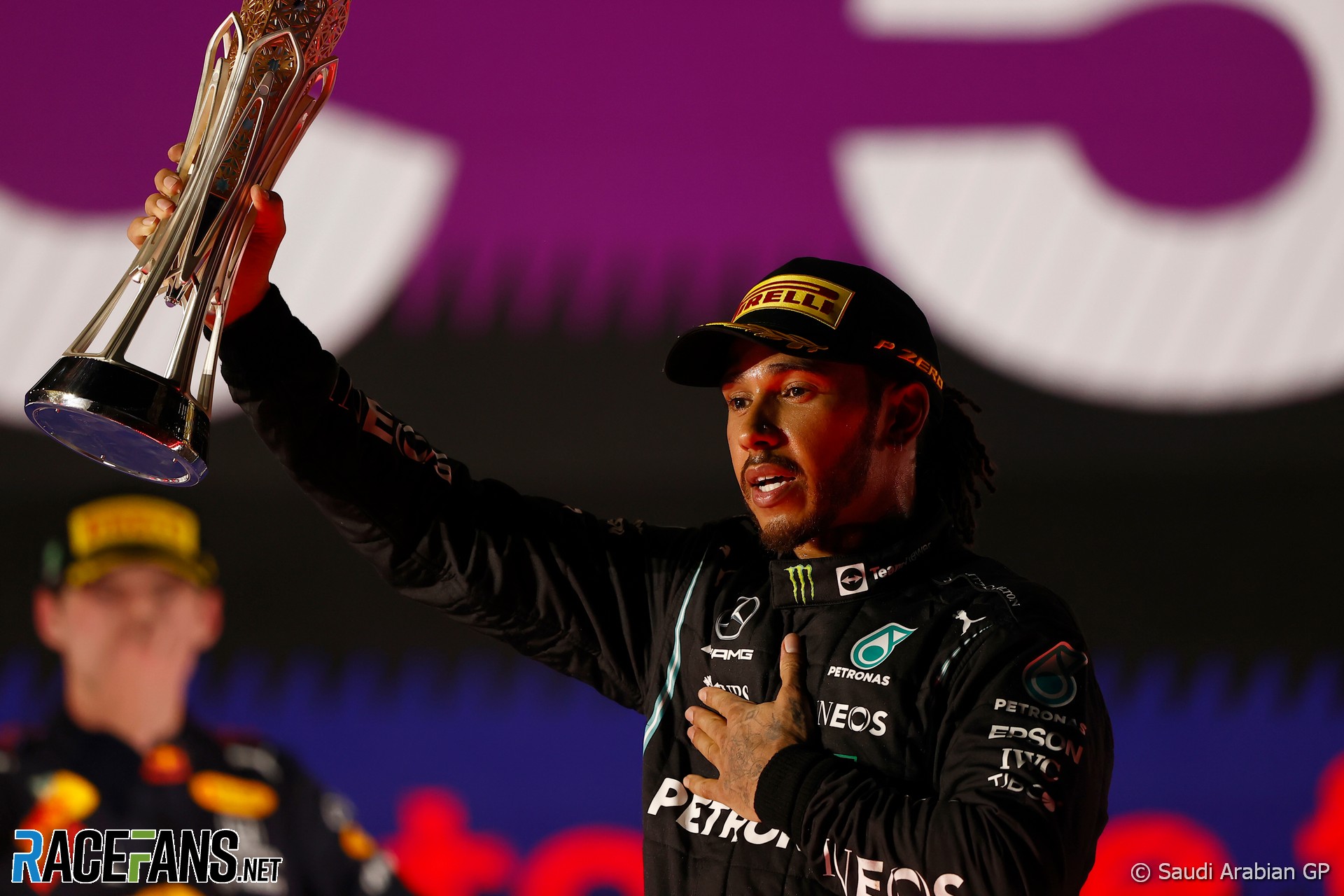 For the second race in a row Lewis Hamilton won from pole position, meaning his tallies of both rise in lock-step, to 103 each.

But he also claimed the fastest lap – despite a front wing which had taken two hits – and therefore grabbed his first ‘hat-trick’ of the 2021 season. His last came at Autodromo do Algarve in 2020.

Hamilton therefore edged closer to two of Michael Schumacher’s few remaining major records he hasn’t already toppled. Schumacher’s tally of 77 fastest laps is still well clear of Hamilton’s 59. But this was Hamilton’s 19th ‘hat-trick’, leaving him just three away from Schumacher’s mark. Only one other driver reached double-digits: Jim Clark, with 11.

This was Hamilton’s third win in a row and it has come at a critical time. Three races ago he trailled championship rival Max Verstappen by 19 points and was perilously close to the ‘tipping point’ beyond which he could no longer assure himself of the title simply by beating the Red Bull driver to wins.

Hamilton’s trio of victories has sensationally levelled the score between the championship protagonists. This thrilling scenario is extremely rare: Only once before in the 71-year history of the world championship have the top two in the championship arrived at the final race tied on points.

That was in 1974, when eventual champion Emerson Fittipaldi (McLaren) and Clay Regazzoni (Ferrari) finished first and second in the penultimate race at Mosport, meaning they arrived at the Watkins Glen finale level on 52 points. They were joined by a third contender, Jody Scheckter (Tyrrell), seven points adrift in the days when a win paid nine.

Fittipaldi won the title by finishing fourth, having never been headed by either of his rivals. Tragically, the 1974 season finale also saw the death of Surtees driver Helmuth Koinigg on the ninth lap of the race.

No season has ever ended with the top two drivers (or teams) level on points. In any scenario where that may happen this weekend, Verstappen will win the title. The closest points decision in a championship fight occured in 1984, when Niki Lauda beat McLaren team mate Alain Prost to the title by half a point.

Sunday’s race was the third in a row where Hamilton won with Verstappen second, and the 12th time they have filled the top two places in the 21 races so far this year. Five of those have occured in the last five races.

With a lap of 1’27.511 for pole position, Hamilton established an average speed of 253.984kph around the new Jeddah Corniche Circuit, making it the second-fastest track on the F1 calendar after Monza. This was over 10kph faster than the laps we saw at Spa, where only practice was held in the dry, and 8.1kph off this year’s Monza pole position time.

It could have been faster still: Verstappen was on course to lap around three-tenths of a second quicker when he crashed at the final corner. As it is, Hamilton evened up the score between the teams to nine-all on pole positions.

Verstappen led most of the race, as has been a feature of this season. Indeed, even if Hamilton leads every lap and wins the title this weekend, Verstappen will still have led more than twice as many laps as him this year.

With one race to go, the intra-team qualifying battles (based on regular sessions, not sprint races) are settled everywhere except Alpine. If Ocon out-qualified Fernando Alonso, as he did last weekend, the pair will end the season tied 11-all. Considering that Alonso concluded an unbeaten campaign against previous team mate Stoffel Vandoorne the last time he visited Yas Marina for a grand prix, that’s a respectable showing by Ocon.

Pierre Gasly and Mick Schumacher could complete perfect season against their respective team mates, Yuki Tsunoda and Nikita Mazepin. However it bears pointing out Schumacher was unable to participate in two qualifying sessions due to crashes in practice.

Mazepin became the last of this year’s drivers to complete 1,000 racing laps. However he chalked up another retirement when he was involved in the multi-car clash which triggered the second Safety Car period.

Heading into his final race, Kimi Raikkonen is on course to end his last Formula 1 season as the best starter this year by far, unless Lance Stroll pulls off the feat of starting last and passing everyone on the first lap.

Have you spotted any other interesting stats and facts from the Saudi Arabian Grand Prix? Share them in the comments.