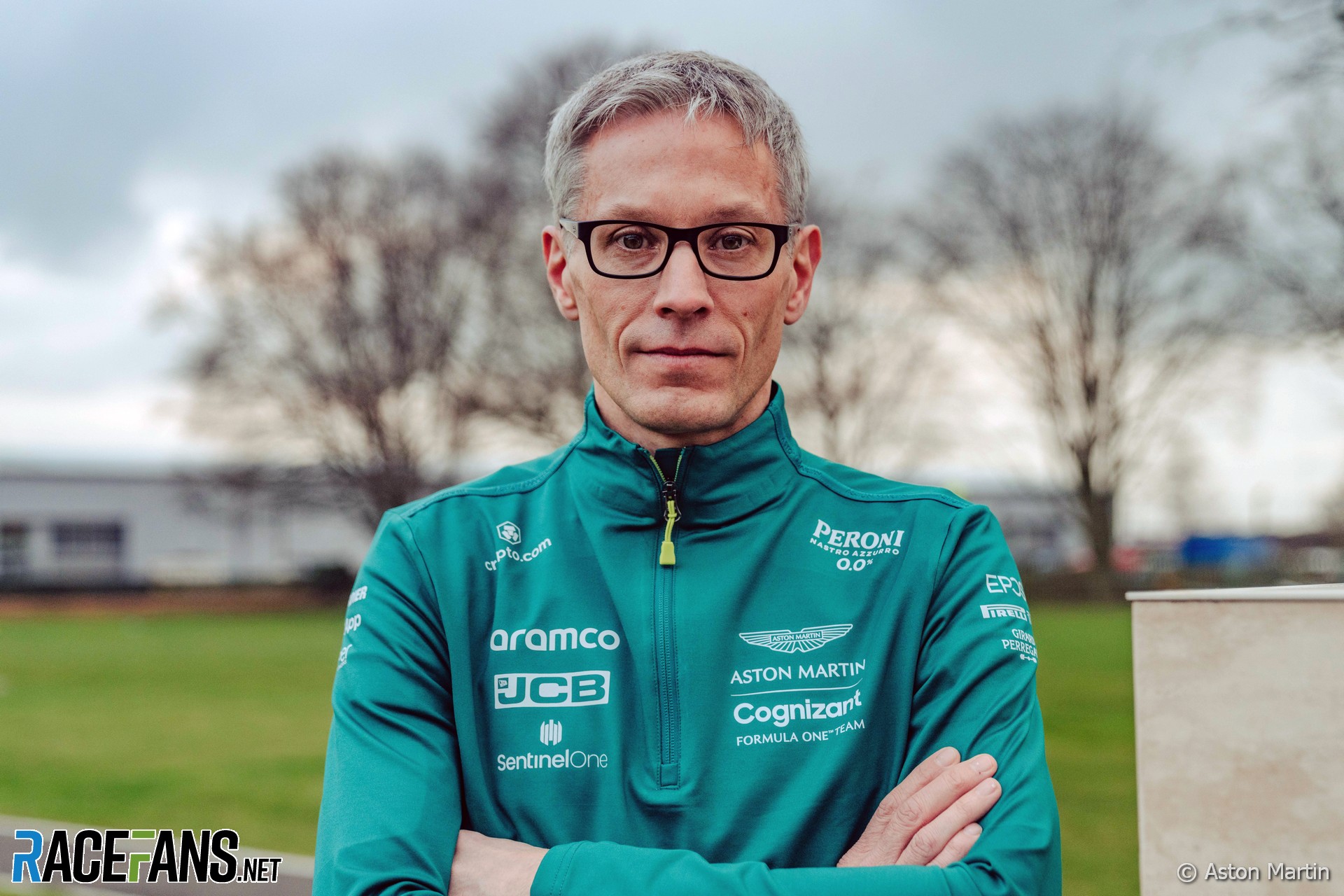 Aston Martin’s new team principal Mike Krack is returning to Formula 1 with the benefit of the years of motorsport experience he gained in the interim – plus an important lesson he learned during his last stint.

Krack arrives at a team which within just four years has been rescued from collapse by Lawrence Stroll, rebranded in the name of another of his acquisitions – luxury car manufacturer Aston Martin – and benefited from a substantial cash injection.

The team has plotted a five-year route to championship contention, recruited top engineering staff from rivals such as Red Bull and is presently building the first new F1 factory for almost two decades.

Speaking to RaceFans and other media in his first interview since turning up at the team’s Silverstone base in his British racing green apparel, Krack described how the team reminded him of his previous F1 outfit. Before his last role heading up BMW’s motorsport division, Krack was an engineer at Sauber during their association with the Munch marque.

“When I looked at ‘Team Silverstone’, or all the names that the team had over the last years, I sensed a little bit the situation as we had with Sauber,” says Krack. In 2001 Sauber scored a remarkable fourth in the constructors championship, beating far wealthier rivals, and within five years had been purchased and renamed BMW Sauber.

“We were in a similar situation where at times we were clearly overperforming to our possibilities and then we had a big partner coming in where you all of a sudden had possibilities that you never had before,” he recalls. “We have something similar here.”

His new team, in its earlier guise as Force India, took fourth in the championship in 2016 and 2017. It did the same as Racing Point in 2020, with the first car designed and built since Stroll’s takeover, the controversial, Mercedes-aping RP20. That also delivered the team’s first victory since it raced under its original name, Jordan.

These feats have cemented the team’s reputation as one which punches above its weight. “You have a great bunch of people that know how to use their funds very, very cleverly,” says Krack. “And then you are provided with additional possibilities. So the similarity [to Sauber] is quite blatant.”

However the BMW Sauber project proved to be a cautionary tale in the difficulties of blending the corporate sensibility of a car manufacturer with the essential dynamism of a motorsport team. When BMW Sauber started the 2008 season brightly, taking a breakthrough one-two in Canada which propelled Robert Kubica to the top of the drivers’ standings, the opportunity before them was obvious.

Yet the team allowed its focus to drift away from a 2008 title bid to preparing for an upcoming rules change. In the meantime rivals McLaren and Ferrari stole a lead on development, and Kubica slipped out of title contention. Meanwhile BMW Sauber’s preparations for the new season failed to bear fruit, and by the end of 2009 the worsening economic situation led the manufacturer to quit F1.

The experience made a clear impression on Krack. “Five-year plans do not always come to success,” he observes. “There can only be one winner, that is true.”

“In the past with BMW, we also had a five-year plan at the time,” he adds, “and it was handled in a very corporate manner, which we must avoid at any cost here.

“At this stage we have everything that we need, but we need to make the right decisions and it doesn’t come by itself that we have to be very aware of. It’s hard work over many days and many weeks and months.”

However unlike another of their rivals working to a similar five-year plan – or, as Alpine prefer to term it, a 100-race target – Krack believes Aston Martin have an important advantage.

“What is a little bit different too for [Alpine] is that we are not an OEM. We are a lean management structure, we can decide very, very quickly and we are very flexible.

“We have big possibilities and we have a quick decision path. I think this is an asset that not everybody is having. Obviously, you cannot plan success. This is clear. But you have to put everything in place to achieve it.”

Krack has joined the team in the month before former Red Bull aerodynamicist Dan Fallows is due to arrive. They are part of a broader recruitment drive which has seen the team expand rapidly since Stroll took over. Krack’s assignment is to co-ordinate the efforts of the enlarged Aston Martin staff.

“My strength is not in the engineering, I think I manage to bring people together to bring them trust to enable them,” he says. “I think I can manage to form teams that work well together.

“This is not a five-minute job to have the individuals because you can bring very bright individuals and they [don’t] work well together. Whereas sometimes it’s more important to have teamwork than the ultimate individual.

“It’s this fine balance between having the good people but also having them together because team is everything. In F1 we have a large headcount and we all have to pull on the same side of the rope or play under the same role with all the people, not only the race team but everybody who is involved, the full headcount at the factory and everything.

“So it’s a matter of bringing them together, having the right spirit and having the right attitude. I think that in the past helped me in my career and the engineering background is something which enables you to really understand what’s happening and you focus on the right area.”

At BMW, Krack was responsible for a team competing across a broad range of racing disciplines, including Formula E, IMSA and GT, while also overseeing their new World Endurance Championship project. However he admits the lure of F1 was too hard to resist when Stroll and Martin Whitmarsh, the team’s recently appointed Group CEO, came looking in November.

“I probably caught Covid at Petit Le Mans so I was sitting in my home office for two weeks quarantining after testing positive,” he recalls “And then I got a call from the headhunting agency.

“It was more about more general things about Formula 1. There was no mention initially about the Aston Martin or what role. So that was the initial conversations, I expressed an interest and the discussions continued.

“At one point, it got a bit more clear that was it all about and what was the team. I have to be honest, I was flushed by the opportunity that I was offered.

“Then there was several meetings, with Martin, with Lawrence, until we came to a point where we shake hands and we said ‘we’re going to do this’.”

While he admits the scale of the opportunity is enormous, Krack is clear in his view that the team does not need root-and-branch change to become championship contenders.

“I have been here a couple of times before my official start and just when you see this huge new building being built, it is overwhelming,” he says.

“I think you have to approach this in a humble way. You have to first come here and understand how this team is working, because we must not forget this team Silverstone is a great team. For all these years it over-performed to its possibilities and it is important to find out where are the strengths of the team and where can we make it stronger, improve on some of the weaknesses it is having.

“I am having a lot of discussions with individuals, with team leaders, with department leaders, to understand how the team is running, how the system is operating. It would be foolish to come here on the first day and try to turn upside-down every stone and rearrange it.

“The team has a good record, it needs a couple of things to make the next steps, but it is not by turning everything upside-down that we manage that.”