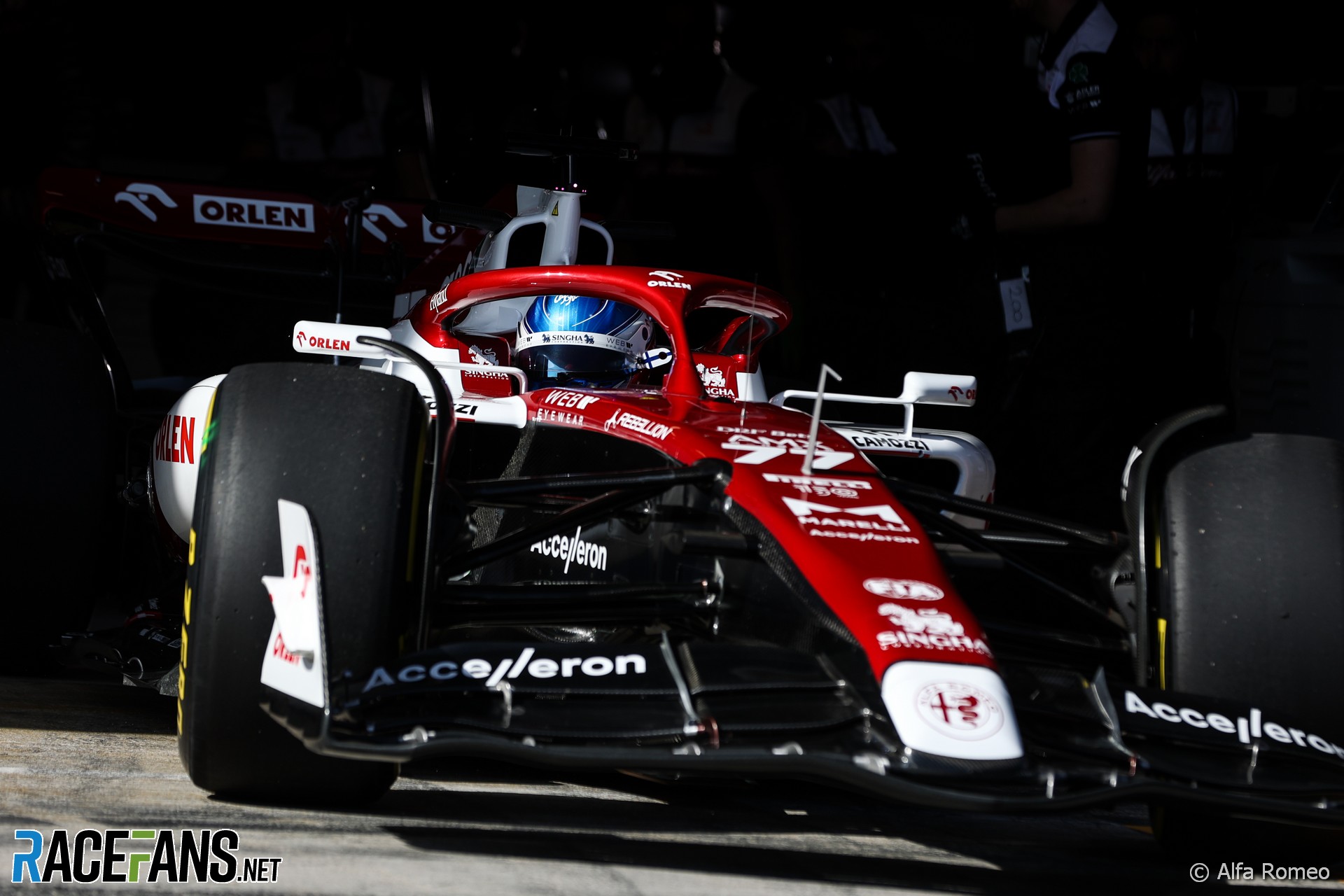 In the round-up: Valtteri Bottas gave a mixed verdict on the first Alfa Romeo Formula 1 car he will race ahead of this week’s second test.

Bottas, who has joined Alfa Romeo from Mercedes, was only able to give limited feedback on the car as the team completed the fewest laps of all 10 in the first pre-season test at the Circuit de Catalunya two weeks ago.

“The nice feeling is that I definitely feel that there is potential, there is some strong areas in the car in certain type of corners,” he said.

“But also, of course, I immediately noticed points to work on with the balance, with some of the behaviour. But nothing that we shouldn’t be able to fix. It feels like we are still in very early stages of actually discovering the car.

“For me it was quite limited running that we had with two different tyre compounds, only with quite a very few set-up changes. So there’s still so much more to discover.”

He hopes to gain a “better understanding in Bahrain” when testing resumes on Thursday. “There’s work to do, I’m not saying anything against that. But also I feel like there is potential in this package and I’m looking forward to discover more about it with the team.”

Williams have signed British Formula 4 racer Oliver Gray to the team’s driver academy ahead of the start of the new season.

Gray, who stepped up to single seaters in the British F4 championship last season, will contest a second year in the series in 2022 with Carlin. His first season saw him finish seventh in the standings, with two wins and one pole position.

“As I begin working with the team, my immediate goals are to develop as a driver both on and off the track, as well as focus on my 2022 season,” said Gray. “I can’t wait to get started.”

Christian Horner says that he believes Mercedes pressured the FIA to drop former race director Michael Masi from his position during their investigation into the Abu Dhabi Grand Prix.

Speaking to the BBC, Horner said he disagreed with the decision for Masi to be replaced in his role ahead of the new season.

“Was it right to fire him based on pressure that was placed on him from a rival team? That for me was wrong,” Horner said. “That’s tantamount to bullying. It’s passively aggressive.

“Yes, Michael did make mistakes and it was frustrating, but you have to look at the role that he was in and the tools that he had at his disposal. You can’t just place the blame on Michael. It’s unfair to do that.”

Haas hit with freight delays ahead of second test

Haas have been forced to seek alternative transport for their cars and equipment to Bahrain after their freight plane from Doncaster Airport was delayed.

The team’s cars and equipment were supposed to leave the UK for Bahrain ahead of the second pre-season test beginning this week, but their original flight was delayed due to technical problems, as reported by Auto Motor und Sport.

The delay could hinder the team from running their cars on the opening day of the second test if they are unable to rearrange alternative transport in time.

It is the latest complication in a tumultuous pre-season for the team, who have dropped their title sponsor and driver Nikita Mazepin as a result of sanctions placed on Russian businesses following the Russian invasion of Ukraine. Pietro Fittipaldi is scheduled to run in the three day test for the team alongside race driver Mick Schumacher.

Hey Ollie, you've got 60 seconds to introduce yourself. GO! 😉 pic.twitter.com/WXr5VKKWBc

Hey everyone, I’m getting a lot of messages lately about that Haas seat. Yes I still have a super license but I am not in any talks with Haas. I already signed my 2022 contracts and very happy with it. All the best to the team and Pietro in this difficult situation.

So… I got to offer @LewisHamilton my piece yesterday, and BOY was he excited about it !!!! 💝 my heart is full and euphoria is still hitting. Nothing in this World would make me more thrilled and proud. Thank you thank you thank you pic.twitter.com/2Z9JYLX3RF

Really excited to be featuring in the new @F1Manager launching this summer on PC/Xbox/PlayStation. Ready to Drive Every Decision in F1? Be the Team Principal of an F1 team and take complete control on and off the track. Can’t wait to see what you stories create! #F1Manager #ad https://t.co/o2jMAPJpQP

Hey Peeps, I'm putting together an eBay page to sell off all my historic stock of race suits, team jackets and the like. 100% of proceeds to go to help the people of Ukraine 🇺🇦.
Stay tuned for info.
Please spread the word, RT as much as you can. 🙏🏻

I am delighted to announce my new position as Managing Director of Sauber Group, which operates the Alfa Romeo F1 Team ORLEN. It’s an honour to take on the challenge of leading an organisation with the successful history of Sauber. I will meet with hard work, passion, dedication. pic.twitter.com/S7jAnylBSz

Horner: ‘My job is to push as hard as I can’ (Financial Times)

"Once you’ve experienced winning, you know, it’s almost like an addiction. You don’t want to lose that. You want to experience it again and again, and again."

"Join Nicholas Latifi as he completes a lap at the pre-season track session in Barcelona, starting and finishing in the pits, all filmed from his helmet cam."

"Yes, we had here and there a few issues to solve, but I am relatively confident we will be on top of them and as mechanical issues… to some extent I prefer they happen now than during the season."

"As member of the Sauber Academy, Alfa Romeo F1’s junior program, the young Brazilian moved to racing European tracks only shortly before retiring from karting and stepping up to Formula racing."

"I’m not saying it was right what happened (in Abu Dhabi), but we could see clearly during the season that confusion was being thrown into decision making and pressure by some of the team bosses. There was also the pressure of those conversations being broadcast."

As Gene Haas claims that his team are looking at multiple candidates to fill their vacant second race seat for the new season, @srga91 hopes that reserve driver Pietro Fittipaldi does get a chance to race this season…

I hope Haas at least give Pietro Fittipaldi a chance to prove himself, before hiring someone else in a hurry. He didn’t do too bad in Bahrain and Abu Dhabi two years ago for the team and was reasonably close to Magnussen.

I don’t expect him to be on the same pace as Mick Schumacher, but I don’t think he will be massively off either. Time will tell if he’s worth the seat or not.

If not, then Giovinazzi would be a safe bet. He’s experienced, knows a lot about the Ferrari PU and would’ve likely been involved in development of Sauber’s 2022 car (meaning he has at least theoretical knowledge in that area). Plus he would be a good benchmark for Mick Schumacher.

The only other candidate I see is Oscar Piastri. He’s definitely fast, one of the biggest talents right now. I don’t see him being a rookie as a big problem. However, his link to Renault/Alpine might be an obstacle. I can’t imagine Ferrari wanting a rival’s junior driver in a team so closely related to their own works team.
@srga91