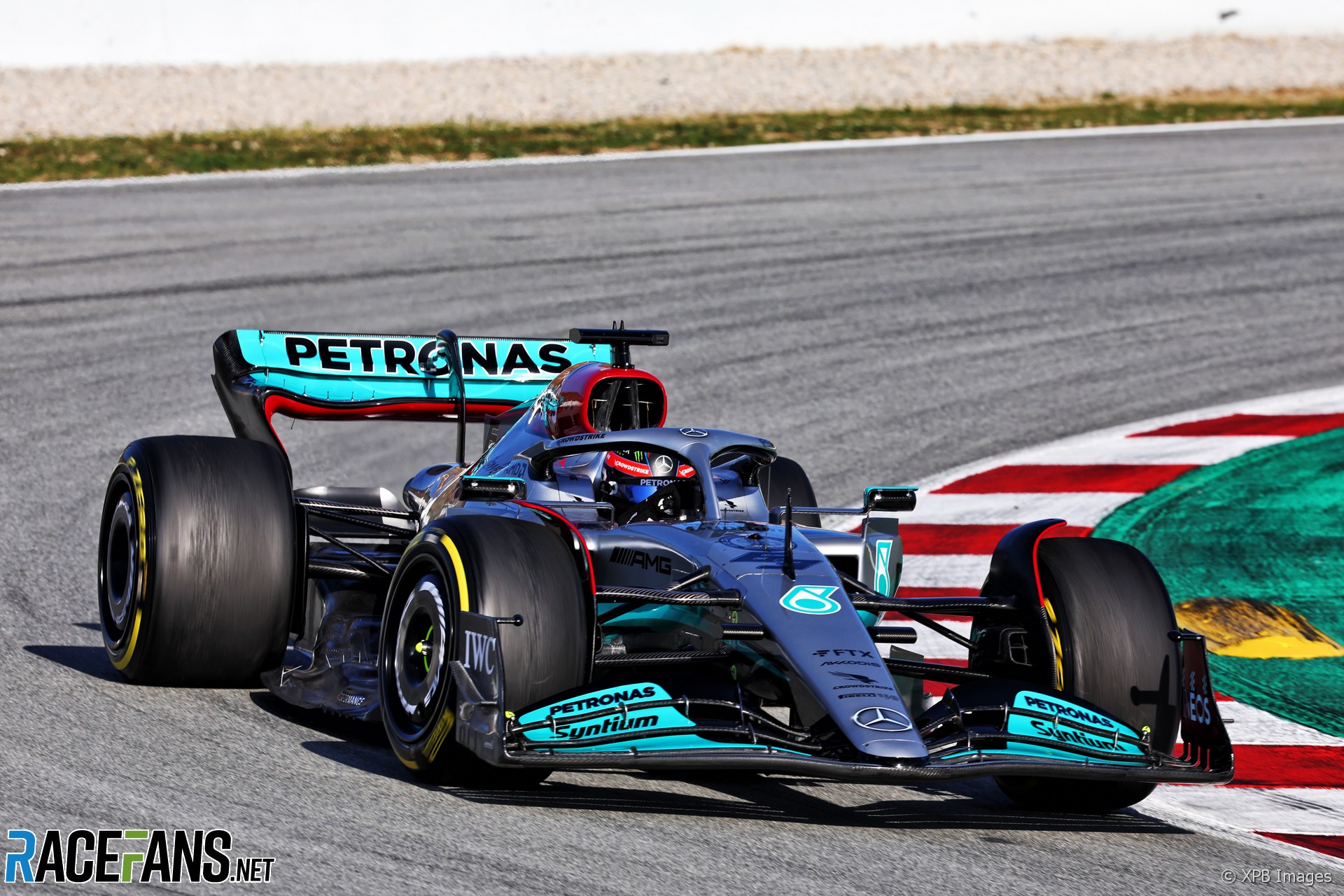 Formula 1’s second and final pre-season test will begin tomorrow amid rumours Mercedes have produced something special. What’s in store for the last three days of running before the championship begins?

There have been various claims one team or another might pull out a surprise for the final three days of testing. But one report captured the imaginations of many. Italian newspaper Corriere della Serra yesterday claimed Mercedes is about to present a drastically overhauled W13 which lacks conventional sidepods. The rumours spread rapidly across social media yesterday.

If any team does have a radical idea up their sleeves, now would be a good time to produce it. After this test the contenders head straight into two races on consecutive weekends, meaning any early advantage will be locked in for the first couple of events.

But how realistic such a design would be is open to debate. Removing or drastically downsizing the sidepods while passing F1’s side impact tests would be a formidable challenge. It would also place far greater demands upon the car’s airbox to provide cooling. However other teams have already pursued aggressive solutions in this respect, notably Red Bull’s ultra-slim sidepods.

Alfa Romeo covered the lowest mileage of any team. “In the past we’ve been usually very good in reliability,” said the team’s technical director Jan Monchaux. “For this new car we had to go very extreme on some design features essentially because of the weight impact. So yes, we had a few issues to solve but I’m relatively confident we’ll be on top of them.”

It was a particular setback to the team as running the only rookie driver in the field – Guanyu Zhou – and a second newcomer to the team in Valtteri Bottas.

Haas also lost a significant amount of running. This was initially due to problems with the floor striking the track and later an engine oil leak cost them even more running. Of course, that turned out to be just the beginning of their troubles during the opening test.

Mazepin out – Fittipaldi in?

When Haas rolled their cars out for the final day of the first test shown of their Uralkali logos and colour scheme, the writing was on the wall for the future of their relationship with their sponsor and driver Nikita Mazepin. Sure enough, Haas subsequently confirmed neither will return following Russia’s invasion of Ukraine two weeks ago, which has already claimed many lives and led two million people to flee the country in the biggest refugee crisis since World War Two.

The team is yet to confirm who will take Mazepin’s place. Team principal Guenther Steiner indicated in Spain that Pietro Fittipaldi, who drove two races for them in 2020 as a substitute for the injured Romain Grosjean, is at the front of the queue. However team owner Gene Haas later said the team wants to put a more experienced driver in the seat for the long-term.

Fittipaldi may therefore get another two-race run in the car for the opening rounds at Bahrain and Jeddah, but have to give up his seat afterwards.

The empty slot on the calendar

The other consequence of Russia’s attack on Ukraine has been the cancellation of the Russian Grand Prix, which was due to be the 17th round of the world championship. F1 CEO Stefano Domenicali said the series would have “no problem at all” replacing the event.

Istanbul Park in Turkey was immediately named by some publications as a likely replacement, but RaceFans understands it is not under active consideration. Jerez has been rumoured as an alternative, though it would mean a lengthy trek from southern Spain to Singapore for the next round.

The Sepang International Circuit in Malaysia, another mooted venue, seems a better fit geographically. However F1 is not under pressure to name a replacement immediately, and as the pandemic seasons have demonstrated, it is now well-practiced in arranging substitute events.

The ‘real’ start of the season?

F1 officially described the first test of the season in Spain as a shakedown event, and is calling the second test beginning tomorrow the first of the new season. However the two events are the same from the point of view of the regulations; this is just another test, the only difference is semantic.

The series also intends to put on a show of presenting the new cars as they return to action. “The real presentation and launch of the new cars will be in Bahrain and not in Barcelona,” AlphaTauri team principal Franz Tost said. “We will have a big announcement and then spectacle and camera teams in Bahrain. This was what teams, FOM and the FIA decided.”

The decision to hold a launch event for cars everyone has already seen is a curious one. What is likely to be of more interest to most fans is this test, unlike the previous one, will be televised.

The one question everyone most wants an answer to from pre-season testing – which team is quickest – is likely to prove the hardest to answer. Only if one team has found a decisive advantage in the order of a second or more per lap is it likely to be discernible through the many variables which obscure testing times.

A succession of different teams took their turns at the head of the times in Spain. Expect to see more of the same over the next three days, and don’t expect a realistic picture to emerge until the first qualifying session of the year concludes just one week later.

89 comments on “Do Mercedes have a surprise in store? Is there a clear leader? Six testing talking points”