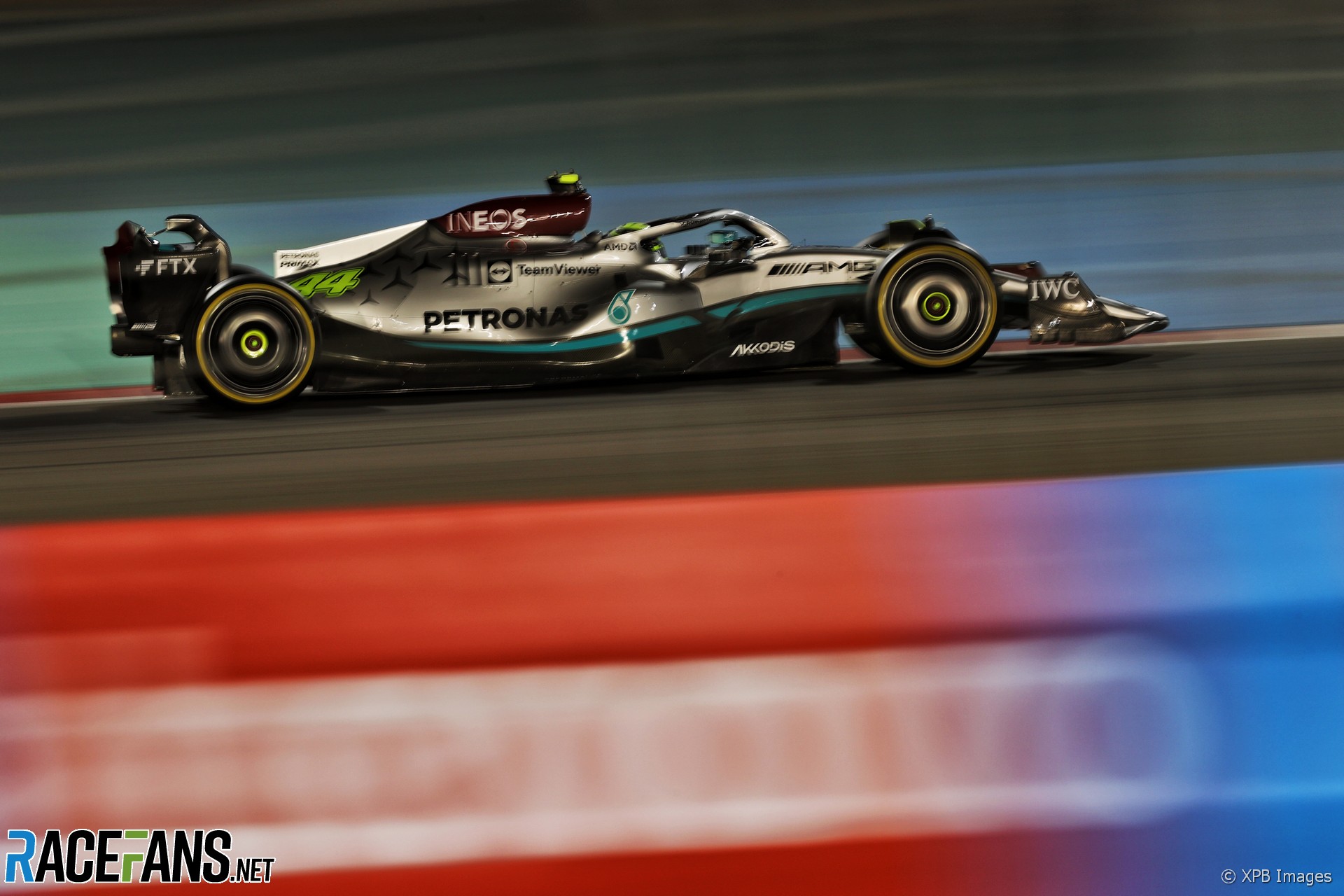 Lewis Hamilton says Mercedes’ practice pace proves the team were not bluffing about the problems they are having with their W13.

The seven-times world champion ended second practice in ninth place, 1.2 seconds off Max Verstappen. Hamilton had to contend with glazed brakes and a DRS fault, but team mate George Russell was still almost six tenths of a second away from Verstappen, and slower than both Ferraris.

This morning Verstappen ridiculed Mercedes’ claims they are not in competitive shape for the start of the season. But Hamilton said their practice pace showed they had been sincere about their problems.

“I told you in the last week we’re not going to be in the race for a win here,” he said. “If you look at the Red Bull they’re a long, long way ahead. It’s in the region of eight to nine tenths ahead of us and Ferrari something like half a second, six tenths ahead of us. So we’re fighting and scrapping with whoever’s behind them.”

A “longer term” fix is needed for the car’s lack of pace, he said. “We’ve had small problems in the past, relatively. Compared to this year, we’ve had much, much smaller problems.

“We’re faced with much, much bigger problems this year. Everything we do to try and kind of fix it, doesn’t really change that. It appears that it’s probably going to be a more longer-term fix. Nothing in the short term.”

Russell echoed Hamilton’s words, saying Mercedes are “a long way off” their biggest rivals. He suggested the team may even have fallen behind Alfa Romeo – who his predecessor Valtteri Bottas has joined – and AlphaTauri.

“I think it’s clear it’s all about lap time and we’re certainly not where we want to be,” said Russell.” I think we’ve made a bit of progress solving some issues, but the pace is just not there at all at the moment. So we need to really go over the data tonight to understand.

“We’re both struggling a bit with the car and we’re a long way off the pace of Red Bull and Ferrari. Even the likes of AlphaTauri, Alfa Romeo are seemingly on our pace or even quicker. So we’ve got a bit of work to do.”

Despite his best lap time being good enough for fourth, Russell believes Mercedes’ deficit is more apparent during longer runs.

“That’s one lap – I don’t think you can read too much into that one lap,” Russell said.

“I think the high fuel pace is a bit more representative. And we were consistently over a second slower than where our rivals are, so I know I need to look into the data a bit further. Maybe there’s a reason for it. But from our side, we’re definitely not overly happy with the car right now and we’ve got some work to do.”