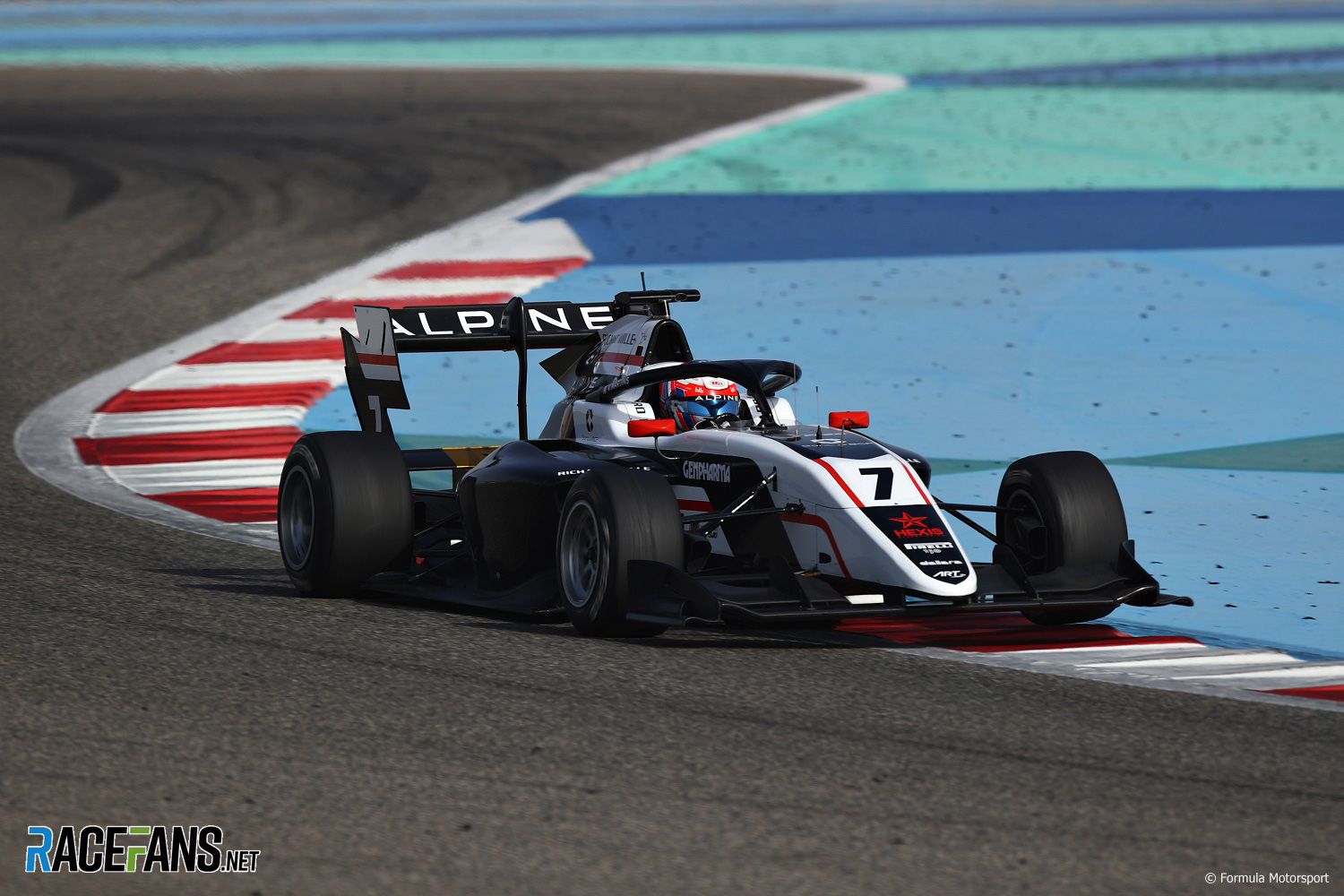 Victor Martins claimed the first Formula 3 feature race victory of 2022, keeping Arthur Leclerc from the lead both on track and in the points standings.

Franco Colapinto had taken pole during Friday’s qualifying session and was able to get away with the lead at the start, covering the inside line into turn one to keep Roman Stanek behind.

There were multiple incidents and several retirements on the first lap, bringing out an immediate safety car. Zane Maloney’s car was seen in the runoff out of turn four, having seemingly collided with equally stranded Charouz rookie Francesco Pizzi. Maloney had suffered a bad start from fifth and tangled with Pizzi, spinning his car on track and ending both their races.

Caio Collet was forced into the pits, where his car retired with visibly broken front suspension rods after running wide over the kerb and hitting it violently while rejoining at turn seven. Collet had been trying to avoid near-contact between Oliver Bearman and Zak O’Sullivan, both of whom were able to continue unscathed.

Kaylen Frederick also fell to the back of the order after spinning, but was fortunately able to continue.

The race restarted on lap five, with an instant yellow flag brought out in sector one. Colapinto was able to keep the lead but Martins pulled ahead of Stanek into turn one and he and Colapinto began to pull away from the rest of the pack.

Stanek slowed halfway down the lap with a rear puncture after possible contact with Alexander Smolyar, fighting for third. A Virtual Safety Car was called before the end of the lap due to Nazim Azman stopping on track and marshals being sent out to retrieve his car.

There was another restart on lap seven, Colapinto once again keeping the lead. Juan Manuel Correa was running close to Smolyar on lap eight, fighting through most of the following lap until the ART driver was able to make a pass on Smolyar and feed him back to a fight with Arthur Leclerc, behind.

Leclerc passed Smolyar into turn one and was on the back of Juan Manuel Correa into lap ten while Smolyar found himself fighting yesterday’s race winner Isack Hadjar for fifth and ultimately losing out at turn four. However, further contact with Smolyar during the battle saw Hadjar ultimately suffer a puncture.

Correa was forced down to fourth and then back into a battle with ART team mate Gregoire Saucy after Leclerc passed him through turn thirteen. Victor Martins was able to take the lead from Colapinto on lap 15, running ahead through turn two and making it stick into turn three, despite an attempt by Colapinto to fight back.

Colapinto’s race drifted further from the top spot as he was passed through turns four and five by Leclerc, claiming second on lap 18 and moving to hunt down Martins, by then more than two and a half seconds ahead.

Martins crossed the line with the lead, Leclerc and Colapinto behind him but Colapinto falling to fifth with his penalty, sending Saucy to the podium and Correa to his best result since his return to racing, in fourth. Smolyar and Jak Crawford drag-raced to the chequered flag, Crawford claiming seventh by a tiny margin.