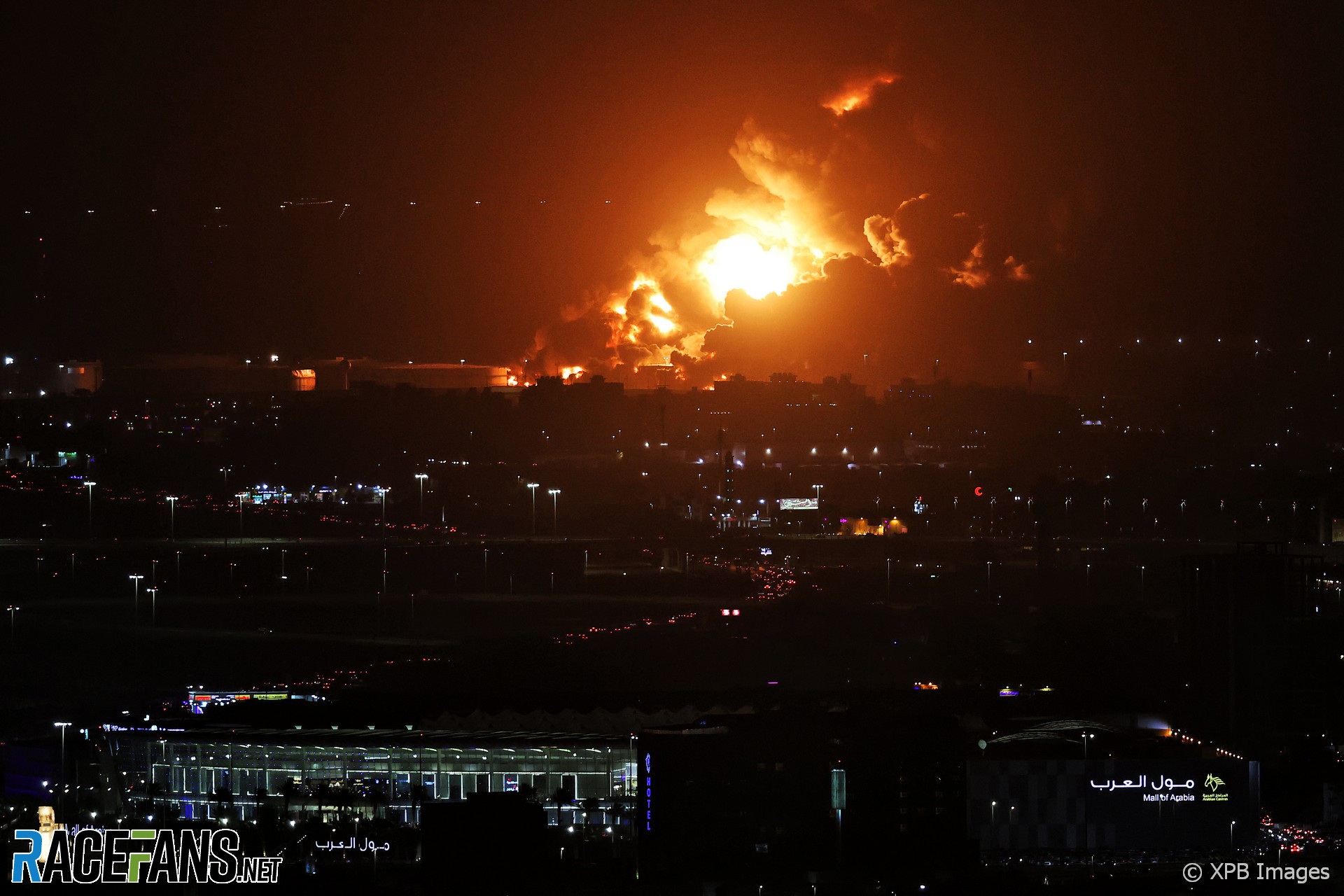 Formula 1 team principals and drivers have been told the Saudi Arabian Grand Prix will go ahead following a missile attack on an oil plant near the circuit.

A large smoke cloud from the attack was first seen around 25 minutes into the opening practice session at Jeddah Corniche Circuit. An explosion occured and fire broke out at the North Jeddah Bulk Plant around 10 kilometres away from the F1 track.

The FIA confirmed the “Yemeni rebel group Houthi” had “claimed responsibility” for the attack. The facility which was hit is owned by Aramco which is a major sponsor of Formula 1 as well as the Aston Martin team. The fire continued to burn and was visible throughout F1’s second practice session, which was held after night had fallen.

Formula 1 issued a statement confirming the race will continue. “Formula 1 has been in close contact with the relevant authorities following the situation that took place today,” it said. “The authorities have confirmed that the event can continue as planned and we will remain in close contact with them and all the teams and closely monitor the situation.”

F1 CEO Stefano Domenicali and FIA president Mohammed Ben Sulayem met with team principals and drivers ahead of the second practice session in Jeddah to update them on information provided by the Saudi authorities. Domenicali advised those present the race will go ahead as planned.

Teams were told the security arrangements are a priority for the race organisers. A further meeting between Domenicali and the team principals is expected to take place at 10pm this evening.

The start of the second session was delayed by 15 minutes following the meeting. “In the interests of the safety of all participants in the event, the stewards have modified the official programme for Friday, 25th March 2022, at the request of the organiser, by delaying the second practice session by 15 minutes,” the stewards noted.

The race’s organiser, the Saudi Motorsport Company, also confirmed in a statement the event will continue.

“We are aware of the attack on the Aramco distribution station in Jeddah earlier this afternoon,” it said, “and remain in direct contact with the Saudi security authorities, as well as F1 and the FIA, to ensure all necessary security and safety measures continue to be implemented to guarantee the safety of all visitors to the Formula 1 STC Saudi Arabian Grand Prix as well as all drivers, teams and stakeholders.

“The race weekend schedule will continue as planned. The safety and security of all our guests continues to be our main priority and we look forward to welcoming fans for a weekend of premium racing and entertainment.”

F1 drivers’ media sessions following second practice were cancelled. Qualifying for the Formula 2 races took place in between F1 practice. The top three qualifiers who spoke in the press conference afterwards said they had been unaware of the attack.