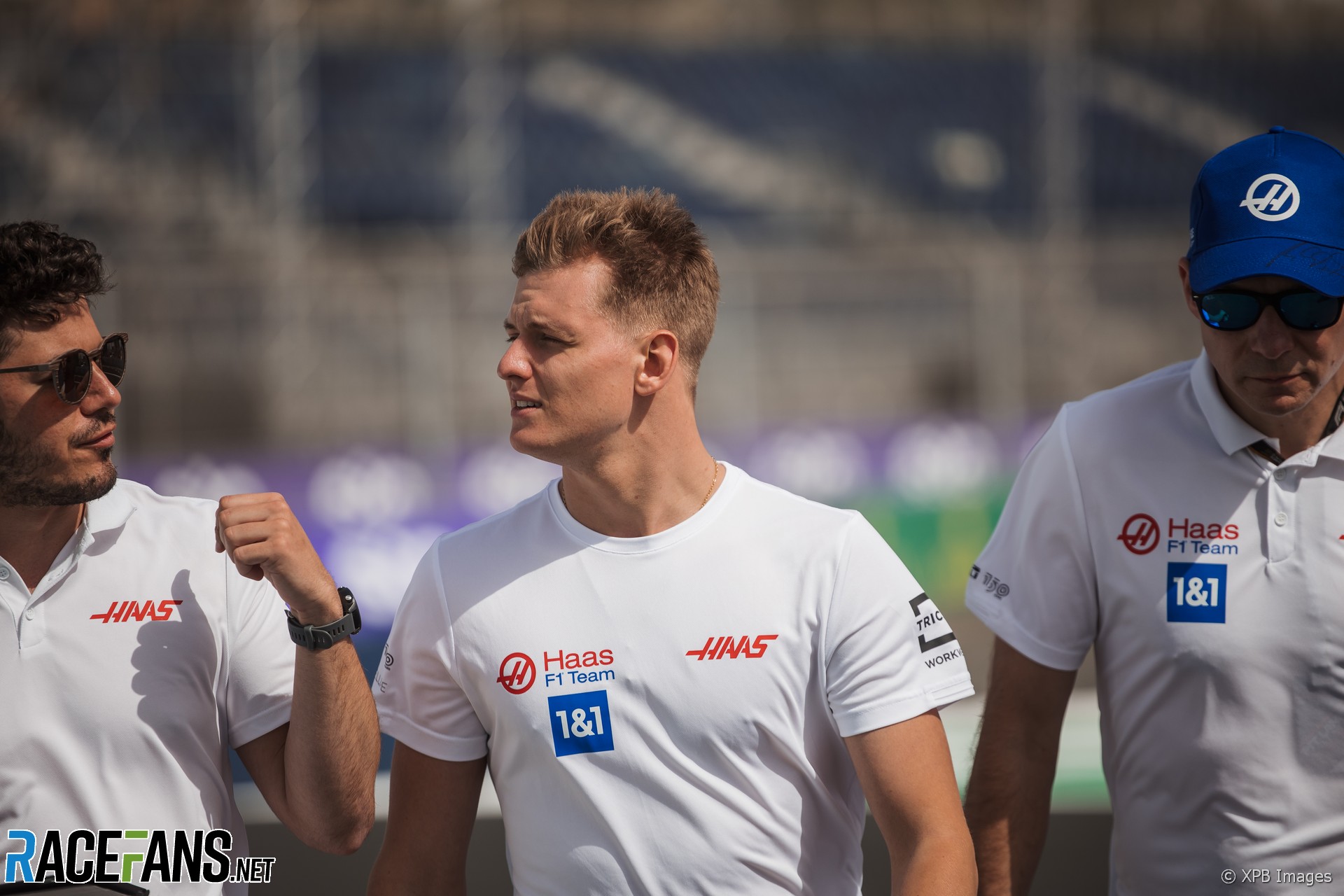 In the round-up: Mick Schumacher says he is “a lot more comfortable” having an experienced team mate in Kevin Magnussen

Schumacher “a lot more comfortable” with Magnussen as team mate

Asked by RaceFans if he felt a different dynamic with an experienced team mate compared to a fellow rookie, Schumacher replied: “Yeah, definitely.”

“I do have to say I feel a lot more comfortable in this year’s construction of how it is, in terms of how we have the working relationship, I think is pretty great,” he added.

Despite Mercedes engine customers filling the back two rows of the grid in Bahrain, Aston Martin team principal Mike Krack does not believe their shortcomings are entirely engine related.

“This is an observation that we had already quite early,” said Krack “On the other hand, we see the Mercedes factory team finish third and fourth. So still, with the powertrain, you can do a good job and I think it’s for us first to do a proper car or a quicker car before we go too much into what you are observing.

“I think the competition has made maybe a bigger step forward and that’s something we need to catch up on.”

Juffali, who has raced in British F4 and last season’s GB3 championship as well as the Dubai 24 Hours, said Wolff, CEO of the Venturi Formula E team and the last woman to participate in a Formula 1 race weekend, inspired her to pursue her dreams of racing.

“I was introduced to Susie Wolff, and at that point I had done my research and knew what it would take to go racing,” said Juffali. “I’m like, ‘you know what, actually, I want to get my racing license, I want to go racing’. And that was it.

“Obviously, 2018 was the year women were allowed to drive [in Saudi Arabia], so it was a big story of women in cars let alone racing. I got my racing license, signed up to race in Abu Dhabi and got in a car with a pure goal of getting behind the wheel, finishing the race, fulfilling this dream of being a racing driver.”

My daughter, Alexa, had to take in a painted egg to school today. I think they expected Easter bunnies and stuff.
But nope, she wanted a @danielricciardo helmet… pic.twitter.com/EMI7ORhv8u

Tinder vs Reality 😅 can confirm there’s a headwind into Turn 1 pic.twitter.com/zeZ9DDb4vc

"Formula 1 is coming to Las Vegas with the first race slated for Thanksgiving weekend in 2023, a source with knowledge of the event told Front Office Sports."

"I’ve lost wins, as well, and it’s not the end of the world, you move on. I think Charles is one of the most talented drivers in Formula 1 and he will win many more races. I think we are just good competitors and we like racing, I think you saw that when we were battling hard and it was all good."

"By racing in Saudi Arabia, Formula 1 is effectively saying that executing people for taking part in pro-democracy protests is okay. It’s telling the Saudi authorities they can wash out the bloodstains of a mass execution and show up at the chequered flag days later to hand over a trophy."

"In this winner takes all special F1 event Guy Martin took part in his first ever Formula 1 race, driving a classic 1983 Williams F1 car at the iconic Silverstone, against former world champion Jenson Button, who's in a six-wheel prototype Williams F1 car from the 1980s."

With drivers of the view that the changes made to the Jeddah Corniche Circuit have not addressed their main safety concerns about the high speed track, @bernasaurus can’t help but feel that the sport is pushing the limits of the sport’s safety standards a little too far.

I think the fact everyone seems to be having the same conversation means there is an issue. After Hubert’s death, Raidillon was changed, but largely not discussed prior to 2016 and Magnussen and then Aitken. COTA’s bumps are something I think we’re casual about because it’s seen as a challenge and the track is about as safe as you can get (Abbie Eaton and sausage kerbs aside, but those things are nearly everywhere and probably a separate issue).

If someone got hurt at Jeddah, I think it’d put the FIA, Liberty and the promoters in a tough spot. Many people have expressed concerns about the sheer blindness of it. It’s perhaps true that Monaco will be just as blind, but the speeds are nowhere the same.

I do like the track, and it’s probably it’s last year. But for so many to say it’s a bit silly, then it probably is a bit silly. I don’t think I’m pushing it too far to say the Nordschleife would be safer, at least you can see what you’re approaching more than half a second before you arrive.

We love to see drivers pushed to the limit. But to do so when it seems most are saying this is dangerous, comes across as reckless.
@bernasaurus