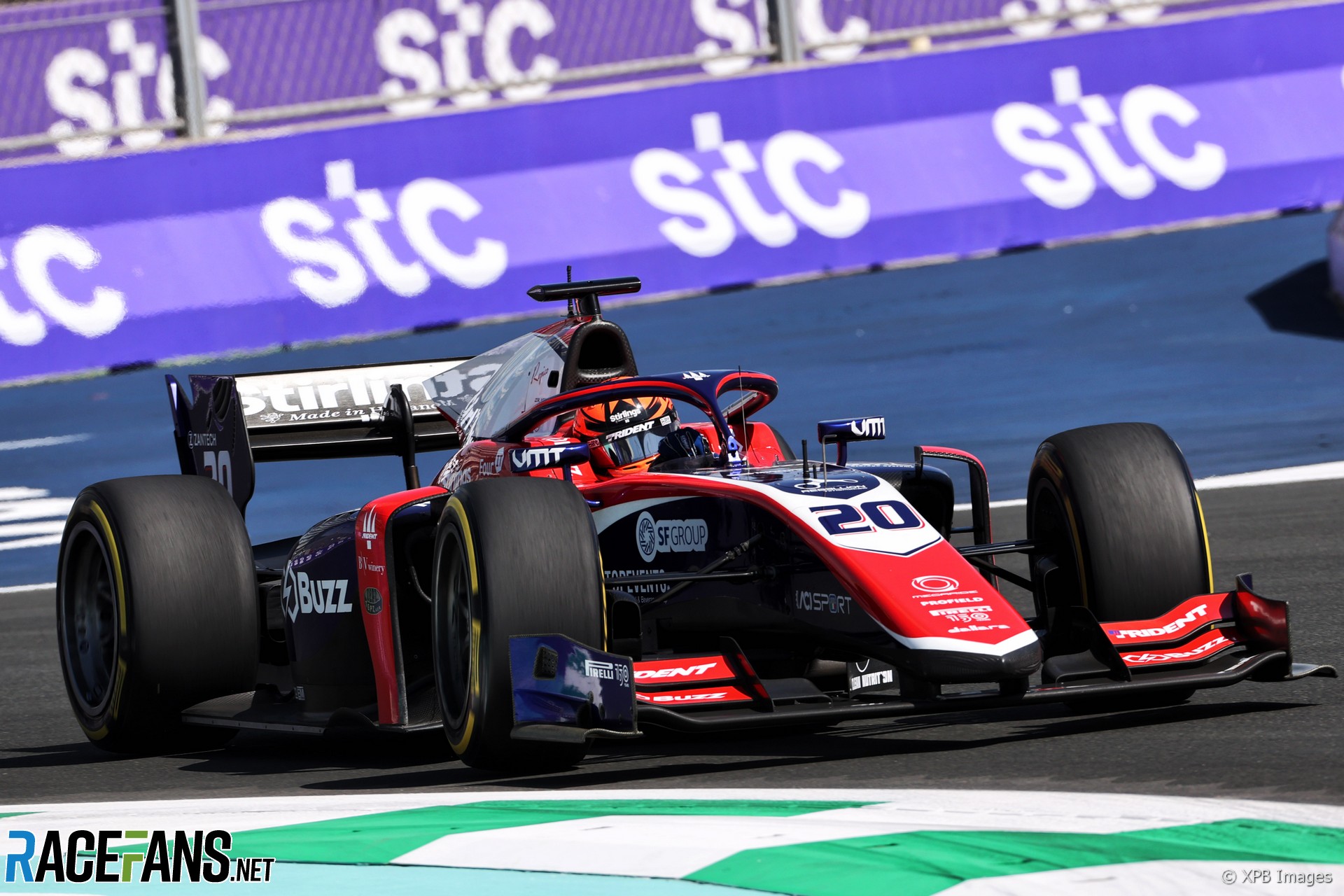 In the round-up: Formula 2 drivers say they “didn’t notice” screens installed to help improve visibility around the Jeddah Corniche Circuit

Formula 2 drivers were the first to run on track with newly-installed screens designed to help drivers see better around blind corners and avoid collisions.

However, they said after qualifying that they had not taken advantage of the feature.

“It really didn’t change for me because I wasn’t looking at them,” said Felipe Drugovich. “So it was pretty much the same. “

“I didn’t notice them, to be honest,” admitted Richard Verschoor.

While Jack Doohan concluded “I think if you’re looking at those screens, you ain’t going fast enough.”

Mercedes team principal Toto Wolff said he supports the decision to go ahead with this weekend’s race in Saudi Arabia following a missile attack on a nearby oil plant.

Formula 1 CEO Stefano Domenicali and FIA president Mohammed Ben Sulayem said they had received authoroties over the security of the Jeddah Corniche Circuit after the explosion around 10 kilometres away during F1’s first practice session on Friday.

“We the team principals have been assured that we are protected here,” Wolff told Sky. “It’s probably the safest place that you can be in Saudi Arabia at the moment and that’s [why] we are racing.”

Wolf confirmed the team principals had unanimously supported the decision to go ahead with the race weekend.

His opposite number at Red Bull, Christian Horner, said “the sport has to stand together collectively.” He described the attack as an “act of terrorism” that “cannot be condoned.”

“The sport shouldn’t be bullied into a position [like] that. A situation like that just isn’t acceptable. So Stefano and the president, they’re dealing with it, there’s been all the assurances from the organisers and we’ll be going racing.”

Nico Hulkenberg, who stepped up last-minute for the Bahrain Grand Prix, replacing Sebastian Vettel after his positive COVID-19 test, has said that he did feel some pain from Bahrain but expected the high-speed Jeddah street circuit to be tougher.

“I definitely felt [it in] my body on Monday – it was a bit sore in places,” said Hulkenberg, although he described the discomfort as “manageable.”

“I think the the bigger physical task is definitely here, this weekend,” Hulkenberg added, about the physicality of Jeddah.

Today has been truly unnerving in Jeddah, there’s no other way to say it.

We head back to the track tomorrow to see what unfolds from the drivers briefing. #SaudiArabiaGP #F1

How incongruous is this? Nothing to be alarmed about. Race on. Will be interesting to see how this is dealt with. F1 literally playing with fire #f1

Plane coming in to land as the oil refinery fire burns through the night in Jeddah #F1 #Jeddah #Fire pic.twitter.com/EXovdhaJBB

"The target was to make it in F1 without F1-experienced people Maybe it was a little bit more a philosophical question as well, in terms of really wanting to do it the ‘Toyota way’ as they said and not taking on F1 personnel."

F1, the US and new tech, a match made in heaven (Sport Business)

"F1 is building traction in a market it has been eager to crack for decades. Indeed, according to ESPN, viewership of the sport increased by a staggering 42 per cent in 2021, compared to the 2019 season and the early signs suggest that the inaugural Miami GP will be a sell out."

An Update to Our Players (Gran Turismo)

"To improve the player experience, we will be rolling out a considerable Update in the beginning of April. The number of events will be increased, and we will re-establish the reward system with greater balance throughout the game to benefit all players."

After Max Verstappen criticised Netflix show Drive to Survive for giving new fans an inaccurate depiction of drivers in his view, @Fer-no65 has personal experience to add credence to Verstappen’s views:

He’s right. A lot of my friends got into F1 after watching the first season of Drive to Survive and hated Perez. I didn’t understand why, he’s not a character that you’d immediately hate for whatever reason. But after watching DTS myself, I found out why: they depicted him as “the enemy” against good guy Ocon… like he was the rich kid with all the benefits and was being a pushover over Ocon, who was a humble guy, the new guy with lots of potential.

It took me a while to try to convince them that Perez is very good and deserves where he is. They finally saw the light (maybe) when he won at Sakhir and got hired by RBR.
@fer-no65