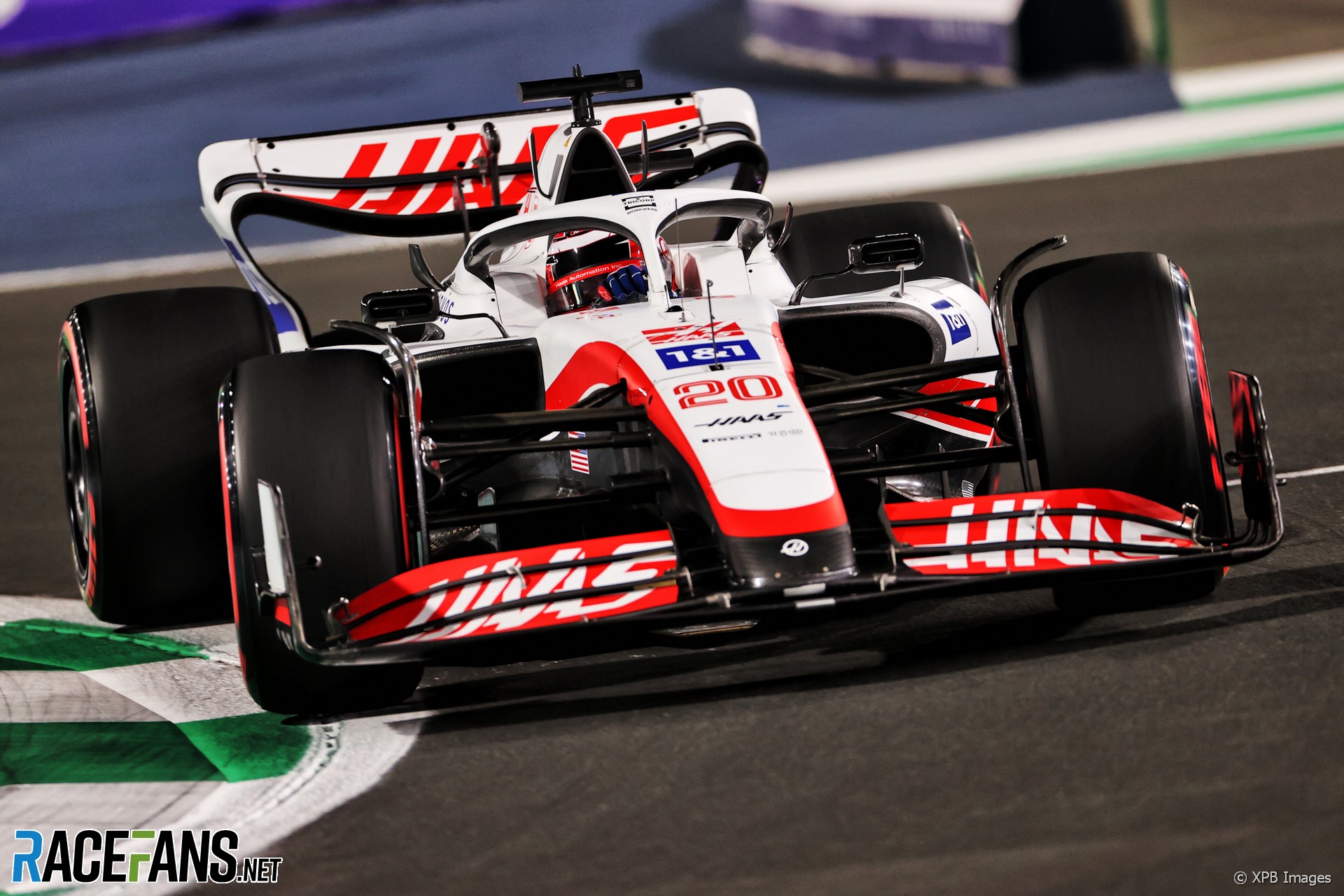 In the round-up: Kevin Magnussen says his car was quick enough for fifth on the grid after qualifying 10th.

The Haas driver said his car “was better than P10 today” and he “didn’t get the most out of it.”

“Honestly, my neck is broken and the last couple of runs I just wasn’t able to drive properly,” Magnussen admitted.

“I just couldn’t hold my head in the corners, then you can’t control the car properly. But as I said, the car had more in it, I’m sure there was a half second in it.

“That time I got in Q3 was on used tyres and it wasn’t a great lap. So I think the car had half a second in it that would put it P5.

“So great job to the team for another strong car at this track and hopefully I can sort out my neck for tomorrow and get some points.”

Jake Hughes, who finished third in Formula 2’s Jeddah sprint race, has been disqualified after his car failed a post-race technical inspection.

The Van Amersfoort driver’s car was found to have no area of the plank which was thicker than 3.6mm. Formula 2’s technical regulations state that cars’ planks must be no more than 1mm thicker or thinner than 5mm at any point, prompting Hughes’ disqualification.

A three-place grid drop was also issued to Jack Doohan for a collision with Logan Sargeant on the first race restart, where Doohan began accelerating before cars ahead had fully got away.

Hi everyone, I just wanted to say that I’m ok🙏
Thank you for the kind messages.
The car felt great @haasf1team, we’ll come back stronger❤️ pic.twitter.com/Mwpy0767kN

Very happy to get my first pole position on the toughest circuit in the world. Let’s give it all tomorrow 💪
Thank u @redbullracing

Watching F2 is like a constant stream of PTSD. Unbelievable.

Most drivers I know all said privately and publicly, this track looks sketch, so many badly angled concrete walls, this shit is exactly what we were afraid of. There’s so many other good tracks in the world and #F1 races here? Pretty sad, just hoping Mick is okay.

Imagine paying all that money and spending all weekend under red flag or safety car 👍. This is not the level that should be the last step before F1.

Second Q2 in a roll! Driving these car on the street circuit is crazy! 😅

"A marshal working at the Saudi Arabian Grand Prix will take no further part in the event after sharing a message on Twitter in which he hoped Lewis Hamilton would have an accident similar to Romain Grosjean's at the 2020 Bahrain Grand Prix. The marshal posted a message in Arabic on Saturday morning, which translated as 'I hope he has an accident like Romain in Bahrain.'"

"F1’s repeated refrain when called to answer such criticism is that they believe they can effect positive change in the countries they visit. Nelson Mandela held the opposite opinion in believing how important the sporting boycott was in helping end apartheid in South Africa. Worse still, there is no evidence any change ever occurs."

Jenson Button on Drive To Survive, Lewis Hamilton and Formula 1 in 2022 (Metro)

"For me, it’s exciting to see (Hamilton) battling it out with people like Verstappen and the Ferrari guys, with Leclerc being competitive and quite an aggressive driver, as well, in the way he fights for position. This is what we want. When it was just Mercedes winning every weekend it’s not so fun for people watching and everyone involved. To have two teams last year fighting for championship was great, and possibly three this year, if not more – F1’s in a good place."

"I think my race pace has improved massively since my debut last season. I keep going forward each round. I just need to make sure for the next weekend that we have a better qualifying and start from a better position."

Both of last year’s title contenders were out-qualified by their team mates, notes @Tommy-c:

It’ll be interesting to see how Max handles the situation if Sergio can be consistently challenging him. Early days obviously but certainly looking promising for Perez. 2018 would be the last time he was properly challenged by a team mate but they weren’t consistently fighting for poles and wins. Similar situation at Mercedes!
@Tommy-c