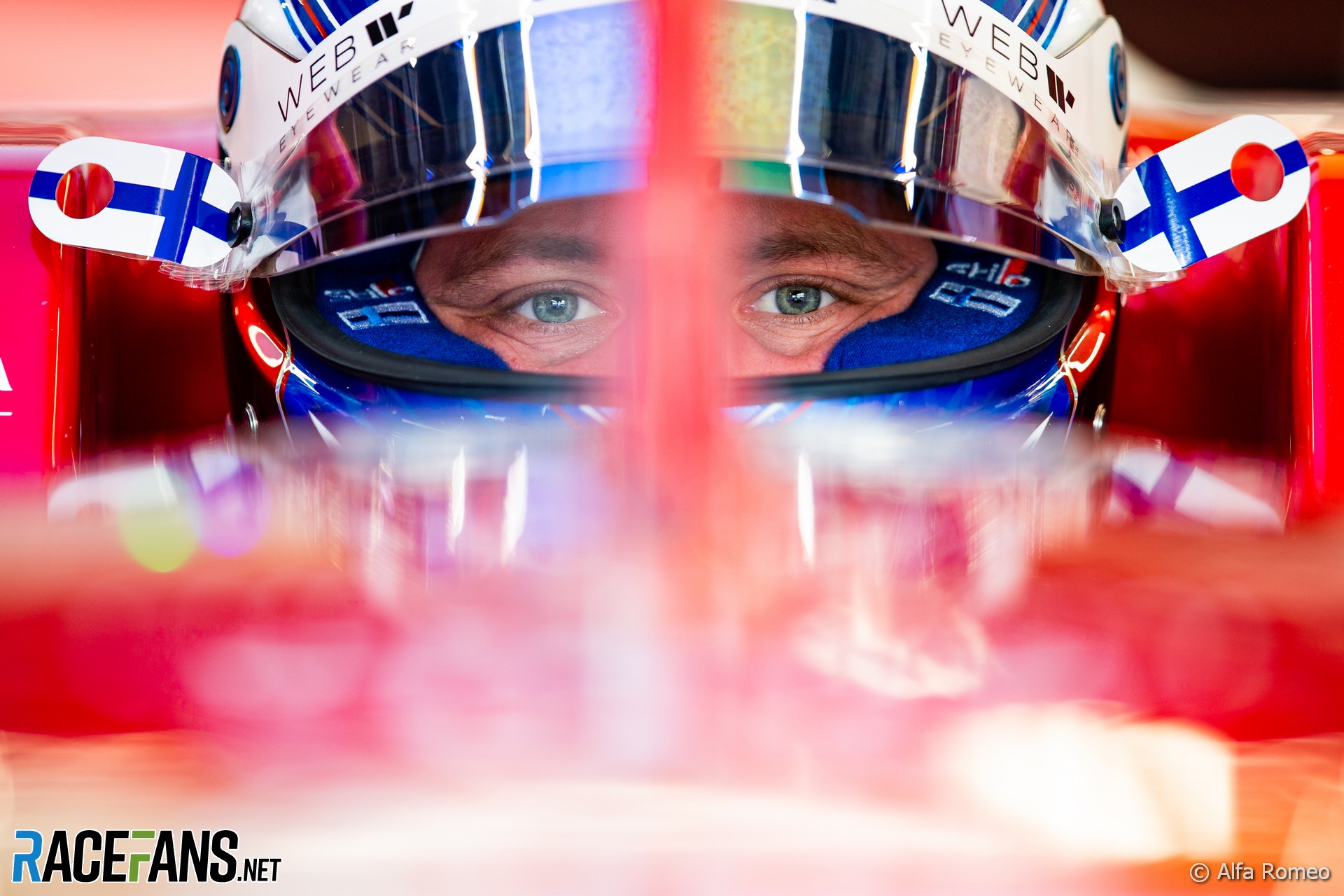 In the round-up: Alfa Romeo’s Xevi Pujolar says Valtteri Bottas is bringing a “positive mood” to the team since joining from Mercedes

Alfa Romeo’s head of trackside engineering, Xevi Pujolar, says Valtteri Bottas is bringing a “positive mood” to the team since joining from Mercedes.

Bottas finished sixth on his debut with the team in Bahrain and was running ninth in Saudi Arabia before an overheating problem ended his race. Pujolar says that Bottas is bringing more to the team than just speed out on track.

“His performance, I think is impressive,” said Pujolar. “But on top of that, what is helping on top of the performance is the positive mood he’s giving to the team and to the other driver.

“He’s fast and he’s bringing the team with him. And I think that’s the key. It’s not only about going fast on track, but then also to make sure that the team is following you, here, at the track and at the factory and with the other driver.”

Norris “would love to look forward to” returning to Jeddah

Lando Norris said that he was “relieved” to have got through the Saudi Arabian Grand Prix weekend and that “We love racing, under any circumstance all we want to do is race, and that’s what we love. It’s why we do the jobs we do.

“But I guess it’s a nervous place to be, as drivers and everything and it’s just you’re going to have these nerves and that’s why we had the chats that we did. But we got given the reassurance from everyone and Saudi and everyone that we were safe. And I think from my side and I think everyone’s side, we believe that and we had to believe it and it’s true, so I’m happy.”

“Whether we come back here or not,” Norris added. “I mean, I would love to look forward to it because it’s a fun track and it’s good fun. But those are discussions we’ll have after the weekend.”

Teenage W Series racers Bianca Bustamante and Juju Noda will race with the W Series Academy programme for the next two seasons, the series has announced.

Bustamante (17) and Noda (16) are the two youngest competitors in this upcoming W Series season and will be teamed together during the championship. As part of the academy programme, the pair will benefit from dedicated engineers throughout the season as well as receiving coaching on their driving and racecraft.

“All my life, I’ve had my sights set on Formula 1, and now my racing career has taken a big step in the right direction thanks to W Series,” said Bustamante. “There’s still a lot of work to do, and every day I’m learning because everything is still new to me. I’ve enjoyed every moment so far learning what it takes to become a professional driver, and I’m going to give it my all both on and off the track.”

Met Mick Schumacher on Sunday and had a long talk with him. Great to see him well after that crash and looking forward to see Mick back racing in Australia in a couple of weeks.@fia and @F1 have done an excellent job in improving driver safety. #f1

Well done to my team @AlpineF1Team for pushing the boundaries and making this happen. I hope this can serve as inspiration for young girls everywhere to pursue their dreams in the world of motorsport. pic.twitter.com/ksXShtUfp9

Looks like @F1's UK audience has continued to remain high into the new season. Understand an audience of over 2 million watched yesterday's @F1 #SaudiArabianGP on @SkySportsF1, making it the third most watched race ever on #SkyF1, only behind Saudi and Abu Dhabi last year.

F1, IndyCar, SF, F2 and F3 being behind a paywall in the UK now means @IndyLights is probably the top level of single-seater racing you can watch live in Britain?

"The IndyCar series raced at COTA in 2019 but isn't targeted for a return. Epstein said, 'Our three major races (F1, NASCAR, Moto GP) work well with our calendar, so we're happy with that.'"

"Leclerc and Verstappen came up through the junior ranks in the same generation and for over a decade have battled each other for race wins in go karts, entry level single-seaters, and now the fastest racing machinery on the planet. That shared history has allowed them to build up an innate understanding of one another’s tactics, habits, personality and limits on a circuit. So far at least, they know exactly when and where to push each other, and when to draw back."

"I’ve had first-hand experience of people I wouldn’t have thought were interested in F1 buying tickets and telling me they’re coming along because of Netflix. It’s been a marketing phenomenon."

"After a massive public vote, our partner JCB will create and bury a specially designed fan-chosen time capsule at our new Silverstone headquarters. The winner was the recreation of a modern Formula One chassis, complete with integrated roll-hoop and Halo, decorated with the Silverstone layout and a Union Jack flag."

"Quite quickly after jumping out of the car and seeing everyone, realising that we are the first world champions, I started to become emotional.The whole season included a lot of different emotions and to finally come out on top was just a massive relief."

He Was a Champion Racer Sentenced to Life for Smuggling Pot. Now He Fights For People In Prison (The Drive)

"The word 'smuggling' kind of understates the scope of what Randy Lanier and his associates did; their organisation shipped some 600,000 pounds of marijuana into US ports via speedboats and later barges, according to federal prosecutors. He was probably one of the biggest cannabis brokers in American history."

After the thrilling battle for the win between Max Verstappen and Charles Leclerc on Sunday, @oweng only wishes that the TV director had allowed us to see more of it.

I was screaming at the TV while those replays were happening. It was infuriating! The director seemed to think it was ok to spend the majority of the lap showing the replays and slow mo crowd shots of the action at the end of the previous lap, cutting to the live action just before the end of the current lap. So we missed watching the cars set up for the next battle.

In F1 the action isn’t just what happens at the point of the overtake attempt, it can take a whole lap to set up so watching the cars during the full lap is key to seeing all that unfold.

F1, there’s plenty of time for replays after the race or on your social media content. Please let us see more live action.

Same goes for cutting away from an on-track battle to show a midfielder trundling down the pit lane.
@oweng

36 comments on “Bottas galvanising Alfa Romeo around him – Pujolar”