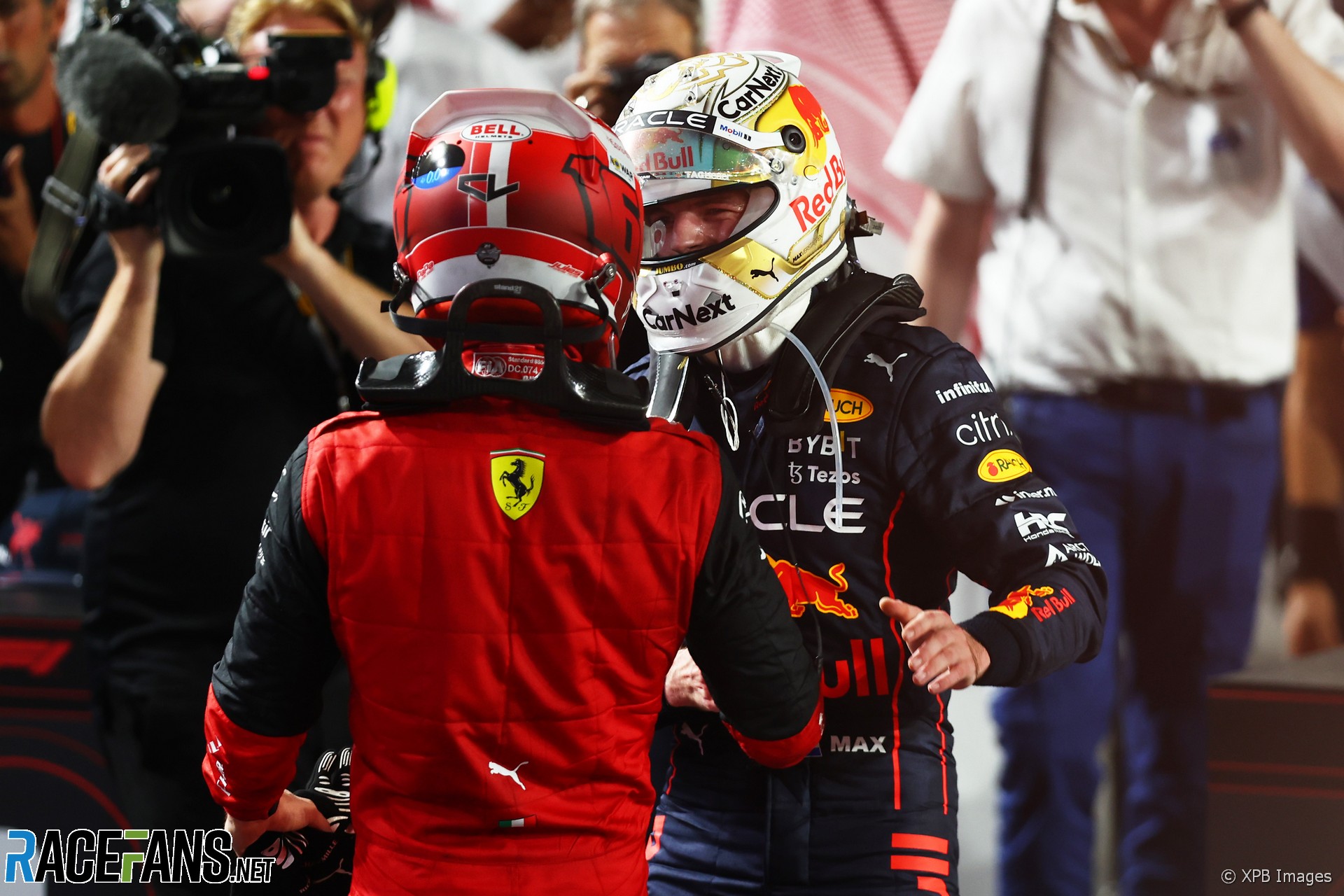 The opening two races in Bahrain and Saudi Arabia served up a tasty appetiser for the season ahead.

Max Verstappen and Charles Leclerc went wheel-to-wheel, battling for victory in both races, the pair now tied at one win apiece.

For now, at least, their rivalry is respectful. But Leclerc has been biding his time in an uncompetitive Ferrari for the past few seasons, waiting to pounce and settle unfinished business with Verstappen from past occasions when the pair have crossed swords.

Their rivalry dates back to their karting days when the duo competed in Italy as children. Verstappen had the beating of Leclerc in 2010, winning almost every championship he entered, the future Ferrari driver coming in towards the back of the grid. Then from 2011, the international wins started coming for Leclerc too.

The rivalry between the pair was captured in footage from the second round of the 2012 WSK Euro Series where the pair collided.

Verstappen and Leclerc in 2012

The Italian reporter initially approaches Verstappen, alongside his father Jos, to ask what happened on track. A young Verstappen responds, “it’s just unfair. I’m leading, and he wants to pass, and he pushes me. I push him back, and after he pushes me off the track. It’s not fair.”

The reporter then asks a fresh-faced Leclerc the same thing. His nonplussed response “nothing, just an incident on the race” has achieved meme status since the pair became F1 stars.

The pair stepped into cars in 2014. Verstappen leapt straight from Formula 3 to F1 the following year. Leclerc’s path was more conventional, competing in Formula Renault, then to GP3 (now FIA F3) and Formula 2, taking the latter title in style in 2017.

Verstappen was already in a Red Bull by then. After a strong debut season for Sauber, Leclerc was promoted to Ferrari by 2019. Soon after, the two locked horns at the 2019 Austrian Grand Prix. Leclerc, seeking his first F1 win, led 59 of the 71 laps.

With 14 laps to go, Verstappen was trailing Leclerc by five seconds but had the Ferrari in his crosshairs as the race drew to a close.

Never one to let an opportunity pass him by, Verstappen launched at Leclerc, sending his Red Bull up the inside at turn three, the pair making brief contact. Leclerc was forced wide and gave up the place.

Verstappen crossed the line first, but an investigation was launched. Leclerc was furious. “What the hell is that?” he fumed over the radio. Verstappen, however, was quick to put the blame elsewhere, insisting: “He turned in on me.”

After a lengthy investigation, the stewards decided they “did not consider that either driver was wholly or predominantly to blame for the incident. We consider that this is a racing incident.” Verstappen was victorious and Leclerc would have to wait a few weeks longer for his first F1 win.

The pair encountered each other again at Silverstone last year, where Leclerc fought Verstappen hard. “I think he was a little bit sore still from Austria,” observed the Red Bull driver afterwards.

We’ve seen hard but fair racing between the pair during the opening rounds. But is history about to repeat itself? Recall how Verstappen and Lewis Hamilton said around this time last year they trusted each other to keep their fight clean, and the rancour that followed. Swipes came from both the Red Bull and Mercedes camps as the season headed towards its deeply controversial conclusion.

Leclerc has never been in a Formula 1 championship fight before. Now he seemingly has the machinery under him. At the season-opener in Bahrain, he put one over Verstappen, the pair swapping the lead several times, as Leclerc sent a warning shot to any rivals.

Speaking ahead of the Saudi Arabian Grand Prix, Leclerc admitted he felt more in control during that race than he did had for any of his other F1 wins. “As a driver I felt like I’m better than what I was in 2019, especially in the race pace,” he said.

“I think it was definitely one of my weakest points in 2019. I was always quite strong in qualifying, always managed to put the lap when it mattered, but then on tyre management especially I was quite weak, so I put a lot of work into it.

“In 2020 I got much better, 2021 again much better. Actually last year, it was probably my strongest point, the tyre management and the race management. So in Bahrain everything was much more under control.

“There was obviously moments where it was very tricky with Max pushing massively behind but overall, I had the control of my pace, of my tyres and everything felt good.”

Verstappen’s straight-line speed advantage tipped the balance in the fight between the pair last weekend, a point which won’t have been lost on Leclerc. But Ferrari team principal Mattia Binotto believes the driver Ferrari put its faith in for the long-term is better prepared for the challenge than ever.

“When renewing with him in the last years up to 2024 it’s because we know he is capable of,” said Binotto. “I think he has simply demonstrated that he is capable of fighting for the championship, no doubt.

“He has got the talent, he has got the capacity, he is a very good racer and very happy with what he is doing in these races.”

Still it didn’t pass unnoticed that Leclerc had a tough fight within his own team last year. New team mate Carlos Sainz Jnr settled in quickly at the team, scored four podiums to Leclerc’s one and beat him in the points standings. There may be days when Leclerc has to worry about the other red car as well as the Red Bulls.

On the face of the first two races, with Mercedes seemingly out of the picture – at least for now – Leclerc has emerged as the greatest threat to the world champion. He’s looked calm and measured in his fights with Verstappen so far and holds the points lead at this early stage.

But much like Verstappen’s battle with Hamilton last year, his rivalry with Leclerc could get heated. No doubt the producers of Drive to Survive are eagerly anticipating that possibility.