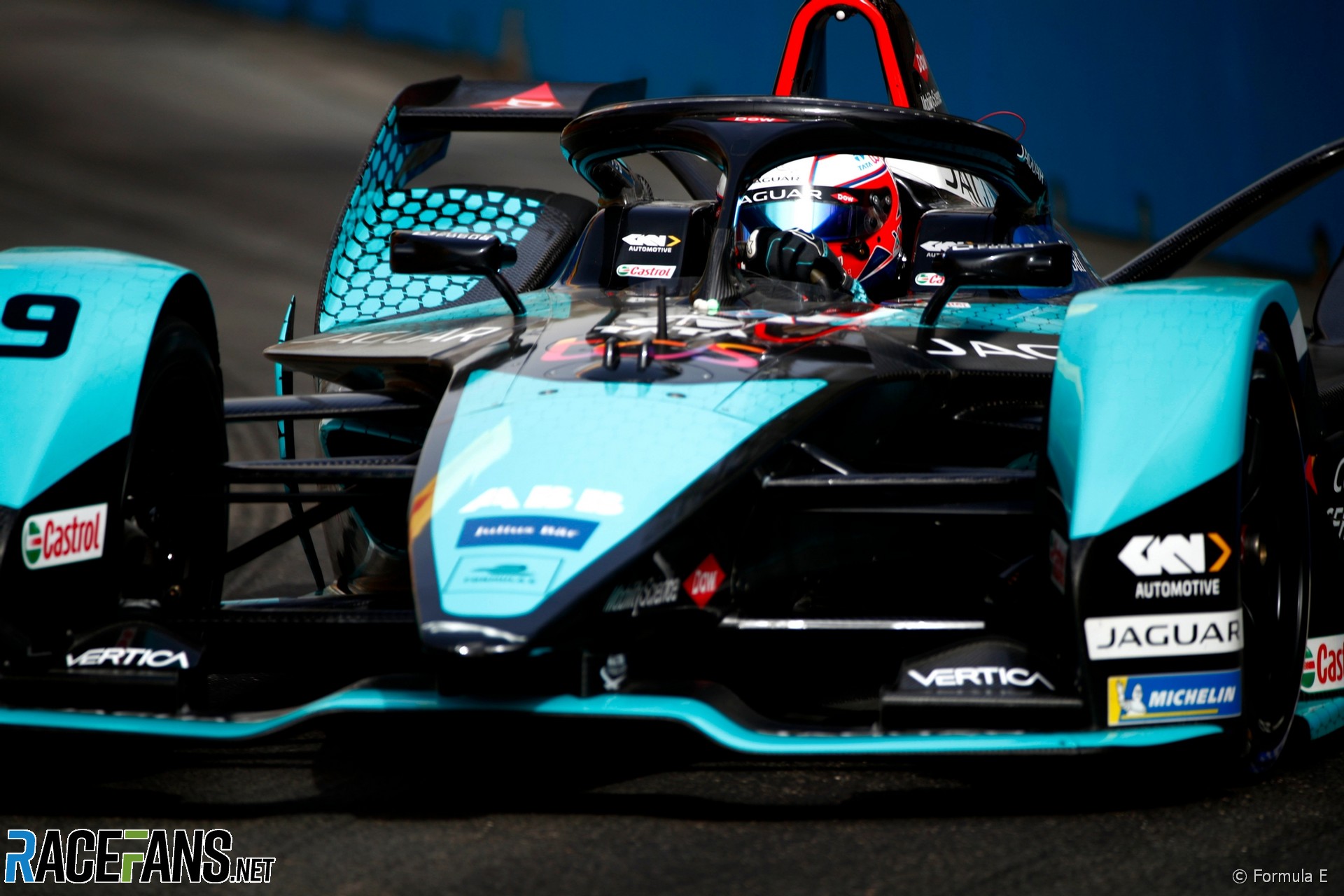 Jaguar’s Mitch Evans climbed from ninth on the grid to win the first Rome EPrix of the weekend in the fourth round of the 2022 Formula E championship.

Evans used his Attack Mode carefully, biding his time until later in the race and taking advantage to pass Robin Frijns and claim the lead in the closing laps. Stoffel Vandoorne finished third for Mercedes, with Jean Eric Vergne fourth for Techeetah.

At the start, pole-winner Vandoorne held off Frijns on the run to the first corner, with Nyck de Vries settling into third position. As the field headed up the hill on their way through turn seven, Oliver Rowland was spun around after contact with Edoado Mortara, leading to Rowland’s Mahindra sitting sideways across the track.

Lucas di Grassi, Sebastien Buemi, Maximilian Gunther and Oliver Turvey were all blocked, until the rest of the field were able to pass the obstruction. With a heavily damaged Nissan from the melee, Gunther then crashed into the barriers further around the lap, leading to the Safety Car being deployed so his car could be recovered.

As the race restarted, Vandoorne led away a train of cars including Frijns, De Vries and the two Techeetahs of Antonio Felix da Costa and Jean-Eric Vergne. Da Costa was the first of the pack to take his first Attack Mode, but out front, Vandoorne was coming under intense pressure from Frijns and the Envision driver was able to make a pass on the Mercedes to take the lead.

Having lost the lead of the race, Vandoorne and De Vries took their first Attack Modes, allowing Da Costa to take second. While the pack behind him squabbled, leader Frijns took advantage and built up enough of a margin to take Attack Mode and successfully rejoin the track with his lead intact.

With just under 20 minutes of racing time remaining, Frijns took his second and final Attack Mode of the race, losing first place Vandoorne. However, Frijns used his higher energy advantage to again pass the Mercedes for the lead on the run to turn four, with Vandoorne taking his second Attack Mode the following lap, dropping behind team mate De Vries before passing to retake second soon after.

Having activated Attack Mode later than Frijns, Vandoorne had the benefit of an extra lap at maximum power than the leader. He used that to drive around the Envision on the back straight, reclaiming the lead of the race. However, it would not last long as Frijns passed the Mercedes for the third time in the race to be back ahead once more.

Mitch Evans, who had been quietly making progress through the field, activated his second Attack Mode much later than the two leaders and was able to use the battle between Vandoorne and Frijns to catch the pair of them. Evans passed the Mercedes for second, before then sliding past Frijns to take the lead for the first time with around a minute of Attack Mode remaining.

The Mercedes pair both started to drop back, with De Vries falling down to tenth and Vandoorne surrendering second to Jake Dennis’ Andretti. However, Dennis was sitting on the lowest energy level of any driver and had to back off with five minutes of race time added due to the Safety Car. This allowed Vandoorne back into second place, where he began to be pressured by a train of cars including Vergne, Frijns, Mortara and Sam Bird.

Frijns took third from Vergne by diving up the inside into the hairpin, before then taking second from Vandoorne. Frijns was unable to do anything about Evans’ lead out front, however, and the Jaguar driver kept his cool and took the chequered flag to win Jaguar’s first race since the second New York E-Prix last season.

Frijns took second for Envision, ahead of Vandoorne who completed the podium. Vergne placed fourth for Techeetha, ahead of Sam Bird in the second Jaguar. Da Costa finished sixth, with Mortara, Pascal Wehrlein, Nick Cassidy and Andre Lotterer rounding out the top ten.