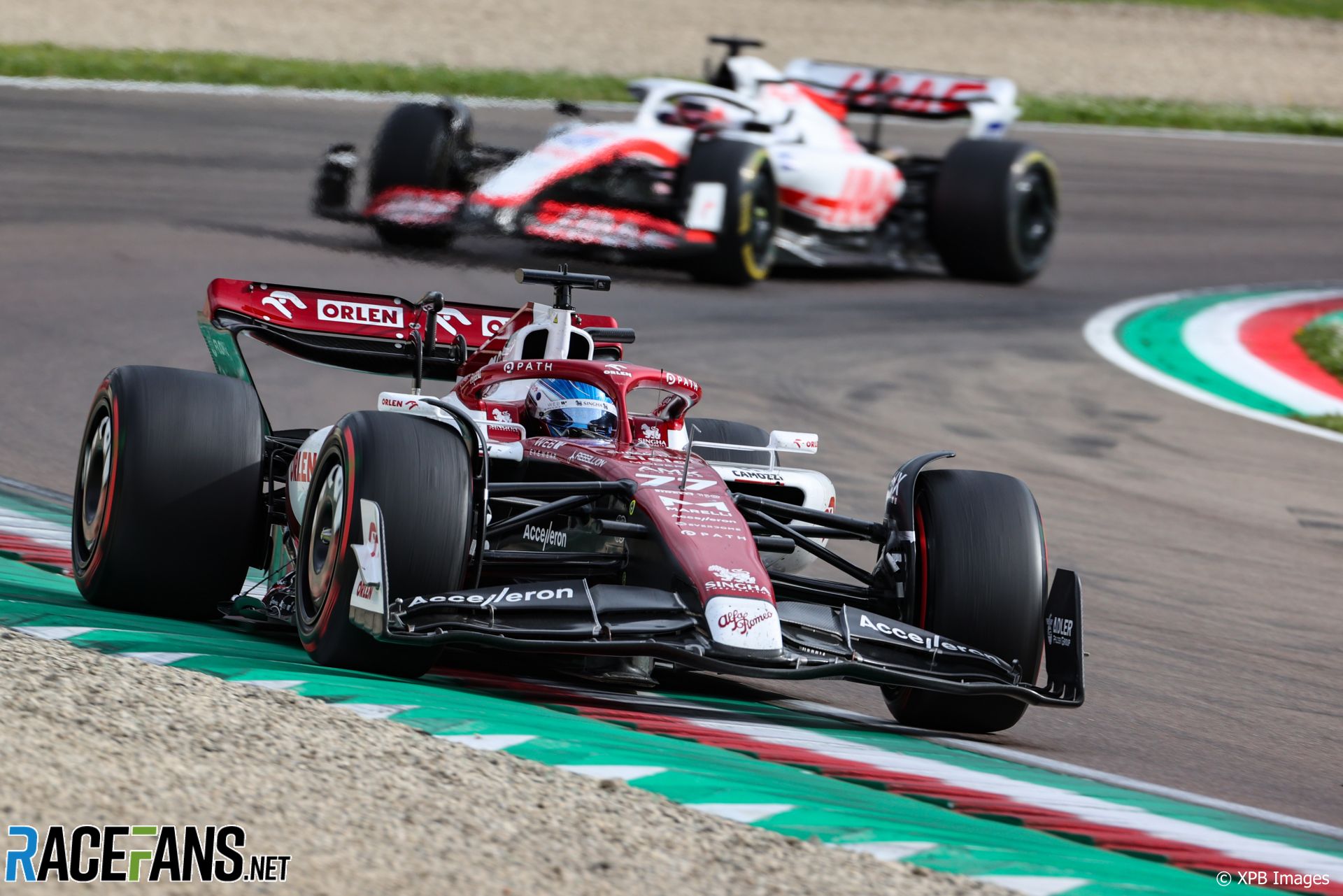 In the round-up: Valtteri Bottas says he his car “worked perfectly” after his Alfa Romeo mechanics swapped his chassis before the sprint race

Bottas has given credit to the Alfa Romeo mechanics after their rebuilt his C42 from scratch following the technical problems that put a stop to his qualifying on Friday.

Bottas missed the entirety of the crucial second practice session while his team changed his chassis, but eventually took to the start of the sprint race from eighth on the grid, eventually finishing seventh.

“I want to thank the team who did a great job putting the car back together,” said Bottas. “There were so many things they had to change but they were brilliant and thankfully everything worked perfectly. I always trust the crew to get the car right, but they had a big task ahead of them and they delivered.

“We had a strong car as well, apart from the wheelspin I had at the start, then it was actually a really, really nice sprint race and we had good pace.”

Ocon “on the back foot” without Alpine floor update

Esteban Ocon believes that his pace this weekend is compromised compared to his team mate due to running and older specification of floor on his car.

Alpine have given Fernando Alonso an updated floor, while Ocon continues to use the launch-specification design. Alonso finished ninth in yesterday’s sprint, while Ocon was seven places behind his team mate in 16th.

“I think Fernando’s car, with the updates, was performing very good this weekend so far,” said Ocon.

“I think tyre deg has played a big part on his side today. On my side, I’m a bit on the back foot, but we have a different car, so that’s what’s to be expected.”

Armstrong had to rely on trackside TVs at restart

Formula 2 Imola sprint race winner Marcus Armstrong had no radio throughout the event, meaning he had to work out when a Virtual Safety Car was ending from trackside screens.

“I quite enjoyed it, it was very peaceful,” said Armstrong. “I was sort of alone with my thoughts, so to speak.

“But then again, it’s always nice to know the gap behind and what’s happening generally. Luckily, there’s a lot of TVs around the track so I sort of keep an eye on all the TVs when I’m driving what’s going on. I could see that [Daruvala] was never really that close on the TV, so I didn’t stress too much.”

The virtual safety car restart, however, he said was “quite stressful.”

“So that was stressful. Luckily, it went green when there was a TV above, so quite lucky.

Kaylen Frederick was given a five-second time penalty for colliding with Ido Cohen, who he was attempting to overtake into Tamburello. Cohen himself then received a five-second penalty for leaving the track four times at Variante Alta and Rivazza. Enzo Trulli also received a penalty in connection to Cohen, after Trulli overtook him at the beginning of a yellow-flagged sector.

Frederick dropped from eighth to 16th after the penalty was applied, Trulli from 21st to 22nd and Cohen remained in 23rd.

I’d swap a Sprint F1 race for a free-practice session any day.

Race fans at @autodromoimola grab vantage points wherever they can…

Great first weekend for @UgoUgochukwu2 in #BritishF4. Pole Position and a podium on his debut. Keep up the good work Ugo! pic.twitter.com/Ywtyk8lCTS

"Formula Imola is pleased to announce that Enzo and Dino Ferrari International Circuit has obtained from FIA the certification for the third level environmental, the highest level that can be obtained. The circuit is proud to be one of the few circuits to have achieved first the ISO 20121:2013 certification, and now the FIA Environmental Accreditation."

"The semiconductor company has provided its second-generation EPYC processors to help boost the team's aerodynamic testing, a vital part of developing a potentially race-winning car."

"We've hit the ground running and we’re in a good place, but I still want to progress. In terms of results, it's hard to put a number down, but if we can finish the season by getting into Q3s and being more competitive, that would be a great goal."

"I think we made the most of it today with a decent recovery. Tomorrow I hope we can do something different with strategy, depending what the weather does as well. Basically, I just got to make the most of this weekend now going forwards and do a better job next time."

"The number three and number four Falken Porsche 911 GT3 Rs have been withdrawn from this morning’s NLS3 race at Nürburgring after qualifying, this the latest impact from a raw materials shortage for all major tyre manufacturers as a result of the sanctions placed on the Russian state due to their actions in Ukraine."

Obviously Mika just wants the Mercedes seat to open up so he can finally come back from his sabbatical.
@red-andy