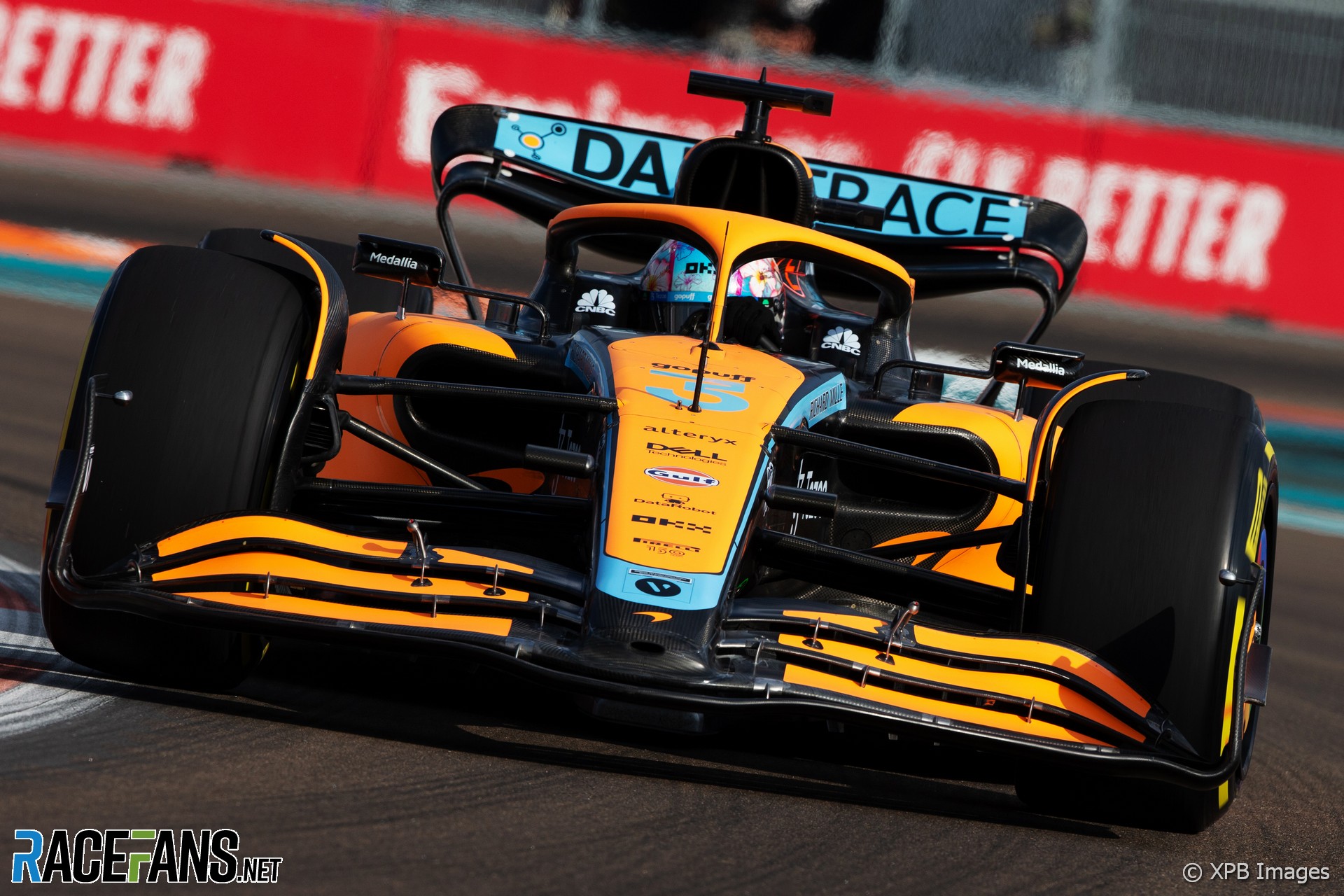 Formula 1 drivers complained of a severe lack of grip off-line after their first day of running at the Miami International Autodrome.

Daniel Ricciardo said he suspected the problem was caused by small stones being thrown up by the cars as the new track surface wore away.

“It seems like just the stones are getting loose and kind of get washed just off the line. So if you miss a little bit the apex, then you’re sliding off and it’s difficult.”

F1’s tyre supplier Pirelli backed up Ricciardo’s explanation, saying this was why two patches of the circuit were repaired before Friday’s running began.

“With this new asphalt they are taking off some small stones from the asphalt,” its head of motor sport Mario Isola explained. “That is something that happened also yesterday after the Safety Car was running and the hot laps.

“So they put some patches of new asphalt. But still some stones are coming off because we found the stones on the tyres.”

Isola said it is hard to predict whether the situation will improve as the surface continues to wear during today’s sessions. F1 is sharing the track with W Series and Porsches this weekend.

“I’m not sure what is going to happen in the next couple of days,” said Isola on Friday evening in Miami. “Probably it will stay more or less as it is but there is the risk that if they remove some stones, these stones are obviously flying, and when you run on this line then you lose a bit of grip.

“We saw a lot of mistakes today but it’s normal in a new circuit. They have to set up the car and probably they had some snap oversteer that is difficult to control.”

He doesn’t expect the problem to go away as the track becomes more worn. “It loses the stones from the top but you have other stones,” he said. “So it’s a matter of the aggregate they have used.

“It’s not that removing the stones that it’s much smoother. It’s the same aggregate, just losing some stones.”

However Isola said the track is producing good grip. “We believe that the level of grip is not far from Silverstone,” he said. “That was an assumption that we got from our grip tester, the machine that we run on track to measure the grip. Obviously now we are going to confirm that with the telemetry data.”

Isola also pointed out that drivers can damage their tyres if they spin onto the run-off at certain points on the track.

“When Carlos Sainz spun he was running over the blue run-off area that is very abrasive,” he said. “It’s similar to Paul Ricard that obviously is made on purpose to slow down a car.

“But the result was that the puncture on the front-right tyre was because of the sliding on this blue area. And he had a hole like a coin on the tyre. So basically he was sliding and it damages the tyre.

“If during the race or during practice, a driver is making a mistake and running or spinning on this area then the flat-spot is guaranteed. So basically he has to go back and change the tyres because the vibration can be quite high.”