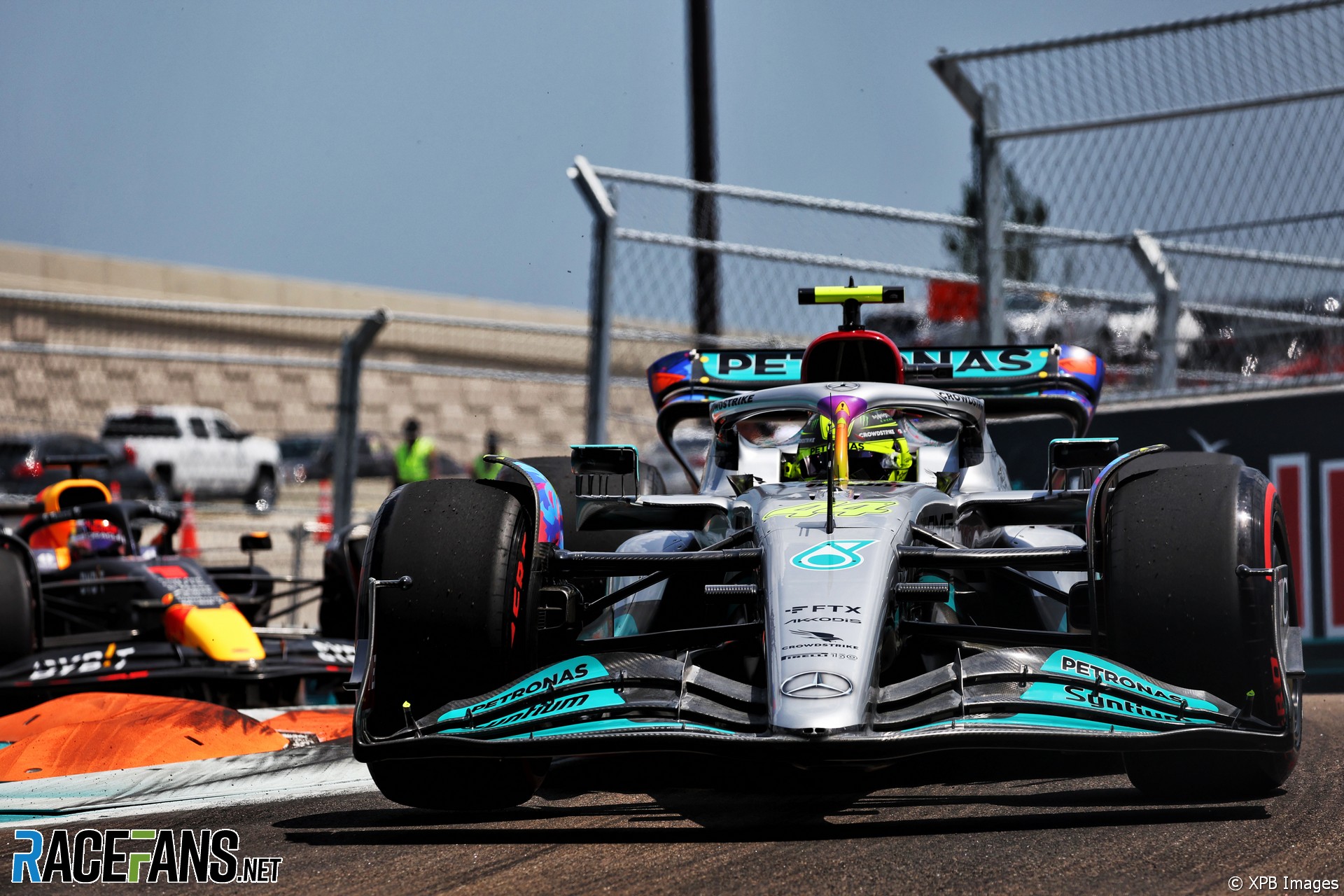 In the round-up: Lewis Hamilton has likened the turn 14 and 15 chicane at the new Miami circuit to driving a kart around a supermarket car park.

Hamilton has likened the turn 14 and 15 chicane at the new Miami circuit to driving a kart around a supermarket car park.

The tight and twisty section in the second sector caused many challenges for drivers across Friday’s two practice sessions. Hamilton says that the circuit is characterised by bumps and questions the need for the chicane at turns 14 and 15.

“It’s kind of crazy when you think people in this day and age should be able to make a flat road relatively easy,” Hamilton said, “but there’s big, big bumps in so many places where the track joins up somewhere else. So I don’t know if they’ll be able to grind that at night or improve it.

“Otherwise the track’s quite nice to drive, except for the chicane. It’s so tight. It reminds me of being in a B&Q car park when I was seven years old in a go kart going between cars. Maybe in future they can remove that one and it’ll improve the track.”

Miami Grand Prix CEO Richard Cregan told RaceFans on Friday they do not intend to change the corner.

Norris not surprised by Mercedes pace in practice

Lando Norris says he is “not at all” surprised by Mercedes’ pace across the opening day of practice for the Miami Grand Prix.

George Russell went fastest of all on Friday, setting a 1’29.938 that was a tenth quicker than championship leader Charles Leclerc. Asked if he was surprised to see Mercedes so high up the timing screens, Norris replied “not at all”.

“They were P4, P5 in Bahrain,” Norris said. “They’ve been strong all year. Just because they have some bouncing, everyone expects them to be terrible. So no, not at all.

“They’re extremely strong in slow-speed corners. Mercedes have been probably one of the best cars in the slow speed all season, just no one ever looks at the GPS very well and picks it up. So not surprised in any way. It just makes us want to work even harder and try and get past them again.”

Esteban Ocon has been handed his first non-driving reprimand of the 2022 season after he almost drove into George Russell while leaving his garage at the start of first practice.

Mercedes released Russell from the garage on the green flag, with Ocon being released from his garage by his team. On seeing Russell approaching, an Alpine mechanic tried to signal to Ocon to stop, however he continued out onto the pit lane, forcing Russell to come to a stop.

Watching @F1 FP1 on a delay. I struggle to believe that the sound effects at the beginning of FP1 were *not* dubbed into the broadcast considering the grandstands are, quite clearly, not full… #MiamiGP

James Corden has just carried Daniel Ricciardo around the media pen over his shoulder. This race. #MiamiGP pic.twitter.com/LpmOKIIW4c

"Last May a recall election was sought to remove council members who voted to bring the race to Miami Gardens. Worse than those lawmakers getting into bed with F1, residents felt as if they had agreed to a bad deal – one that promised only $5m in community benefits and 5% of revenues to the city. So figure about $25m altogether."

"Now that it’s built, the numbers around the race are astounding. The Miami Grand Prix contains: 48 million tons of asphalt for the track, 10 grandstands, 14 million pounds of steel and aluminum from Tower Event Group and Eventstar, 1,100 bathroom stalls, 299,813,447 feet of fiber and copper cabling."

"The son of a former F1 journeyman driver, he was in go-karts as a toddler and in motorsport’s fastest, most prestigious series before many of his friends had driver’s licenses. He was so young when he reached F1, in fact, that officials later imposed a minimum age of 18 to race. It’s now known as the Verstappen Rule."

"I’m here to win championships, and to do that you have to beat everybody. At the moment, we’re not in that position, and we need to work together to push this team forward and give us the opportunity to fight for victories. So I don’t care if I’m ahead of (Hamilton) or he’s ahead of me if we’re fighting for fifth and sixth position."

"I'm very open to working with my teammates, and being friendly and close. I think it's easy for that to slip, actually. Collaborating is in the best interest of the team, and if I want to win, I can only do that if the team is better."

"I’m just doing my job and, if people are interested, it’s fantastic. I don’t mind it, I’m not putting any effort to be anything different. This is what I am, this is what I was before and what I always will be."

"Max and Yuki and were joined by Red Bull Athletes Supercross 250 East Champion Jett Lawrence and Tokyo Skateboarding Olympian Zion Wright for a true Florida experience and showdown in the swamp."

Jamie Chadwick exclusive: 'I had to delete my social-media accounts over W series return backlash' (Telegraph)

"I deleted the apps to be honest, just because it’s easier. It wasn’t necessarily criticism at me, but I see a lot of messages from people willing me on (to bigger things) and that’s not going to be the immediate future. It’s a process, it’s not going to happen overnight."

With FOM pondering whether to bring the promotion of more grands prix in-house, reader PeterG hopes the sport doesn’t try to treat every race like the Miami Grand Prix…

Not every race needs to be a Super Bowl.

Just because some of the new venues can build a fake marina with tons of celebrity glitz and glamour doesn’t mean that traditional venues such as Spa should need to do the same.

The glitz, glamour and hype around traditional venues such as Spa is its history and the circuit itself. They don’t need outside distractions to sell the event because the circuit does it by itself.

If the new venues need all the outside stuff to hype up and sell the event then the track can’t be that good and that has been one of the biggest issues with a lot of the new venues over the past 20 years. Lots of government money to splash out on hype, fireworks and a big show off the track but a racetrack that is average at best.
PeterG