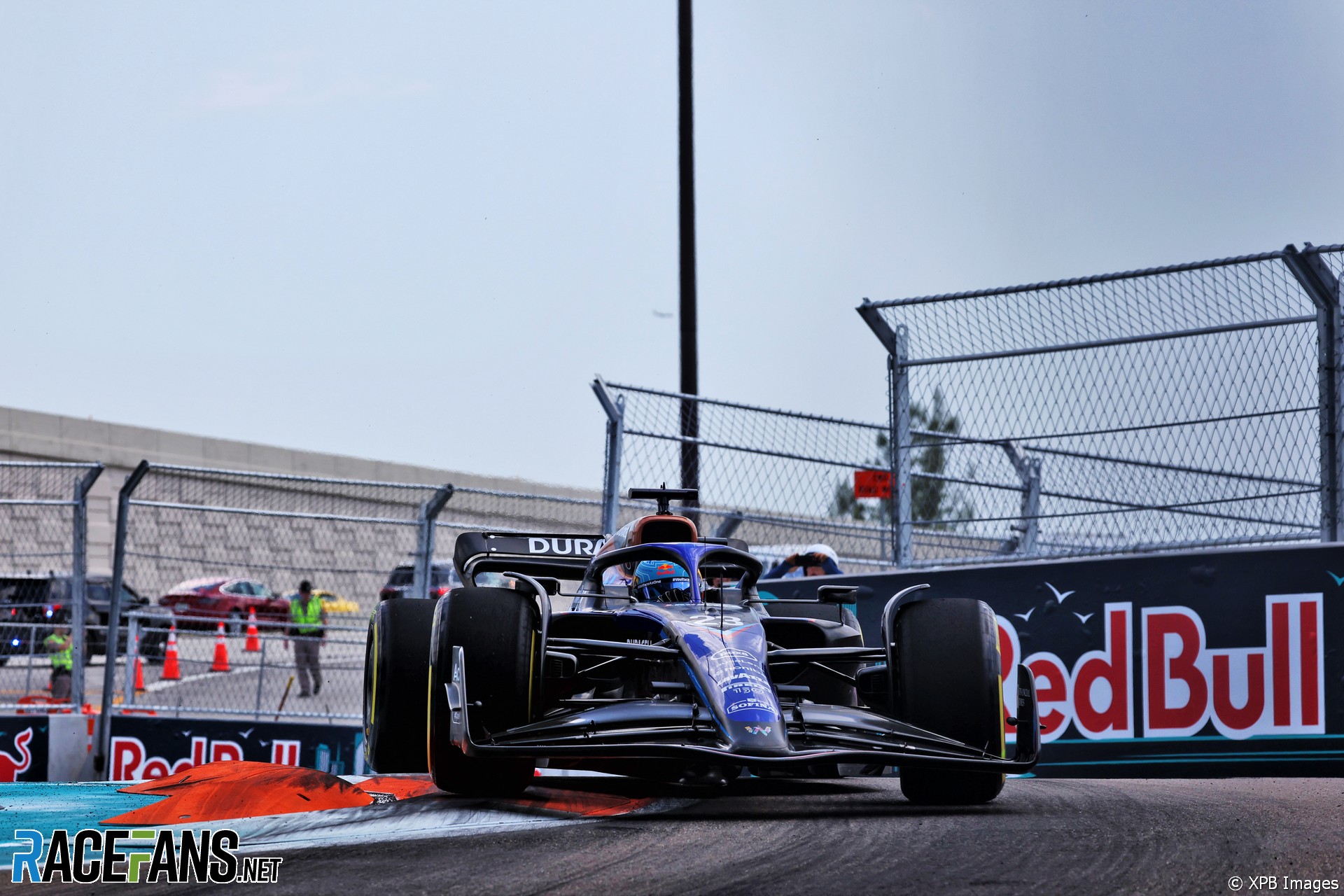 In the round-up: Alex Albon says Williams’ opportunities to score points are down to the team’s strategy and not to luck.

After scoring a ninth-place finish in the Miami Grand Prix, thanks partly to Fernando Alonso’s penalty, Albon said his points-scoring finishes

“I don’t even call it luck” that was producing Williams’ good results.

“I think we were, again, optimistic on strategy and stayed out when everyone else pitted,” Albon explained. “We took our chances like we always keep doing and that’s just putting us in situations where we’re looking at points.”

IndyCar will use new light panels, from the same supplier as Formula 1, Moto GP and WEC, to improve marshal safety and the speed of signal responses.

From the race on the Indianapolis Motor Speedway road course onwards, the panels will be used at IndyCar events after testing with supplier EM Motorsport during the first events of the season proved successful.

Pierre Gasly felt the Miami Grand Prix didn’t deliver as much overtaking as was expected before the race weekend began.

The AlphaTauri was passed by Lewis Hamilton early in the race. “The battle with Lewis was quite short,” said Gasly. “Then after that, Fernando was stuck behind me for quite a few laps.

“So think it was quite, quite tough to pass. Looking at other guys as well, I think there was clearly less overtaking than what I would have thought.”

Honoured to stand between @MarioAndretti and @emmofittipaldi on the grid in Miami. Two world champions and legends of our sport.

Struck a deal with Mario to tick something off his bucket list – he'll be driving a previous @McLarenF1 race car at this year's US GP in Austin 👊 pic.twitter.com/FWzEzNzmvE

Wishing the happiest of birthdays to our team special advisor and former driver – see you this weekend at your home E-Prix! 🇩🇪 #HappyBirthday pic.twitter.com/VX410ROU09

Sad to hear Jochen Luck has died at 97.

He was the voice of the Nordschleife having first commentated on the German GP in 1957 that Fangio spectacularly won.

Just think about what history he commentated on for just a moment. pic.twitter.com/44uSzdRI3S

Reid: 'I think it’s down to a bit of negotiation, but I would certainly be very supportive of there not being a clash, generally. But specifically next year, it is a good opportunity for us to say that we’re not having a clash next year, and that should be the norm going forward.'

Sulaiman out, Serravalle in at HMD Motorsports in Indy Lights (Formula Scout)

Manuel Sulaiman has lost his Indy Lights seat with HMD Motorsports for this weekend’s races on Indianapolis Motor Speedway’s road course, and will be replaced by Antonio Serravalle.

Vettel: 'I think what motorsport, in general, should have in common is to use the engineering power and the determination and motivation to push performance for the greater good, and we’re not. The technology we have in the car is fascinating, but it’s useless.'

Formula 1, but make it fashion: Hamilton on the Miami Grand Prix (and more) (Vogue)

"It’s heartwarming to see that the sport is finally being accepted and noticed in the States: You have so many incredible sports fans—people that genuinely love competition — and it’s amazing to see. And it’s growing — it’s growing to three (races) in America."

No city has staged as many E-Prix as Berlin, which will host its 15th and 16th Formula E races on 14 and 15 May and remains the only place that has played host to an EPrix in every season since the start of the all-electric series in 2014. In all but one of those seasons – season two, when the German round took place near Alexanderplatz – Tempelhofer Feld has been the host venue.

As F1 teams and the championship go back-and-forth on an Andretti entry, F1 Frog suggests that an old model of not diluting the prize money – by not paying out to the 11th team in the constructors world championship – might be a fair way to decide whether teams should get the rewards of competing:

It is way too difficult for a team to get on the grid anyway in F1. If Andretti can provide two cars for the first grand prix of the year they should be allowed on the grid. And if they turn up and are terrible, does that really matter? I don’t see how having a bad team lessens Formula 1 in any way. It was amazing when Jules Bianchi finished ninth for Marussia in Monaco 2014, and apart from Caterham fans I can’t imagine anyone not being overjoyed with that result, so it gives the fans a team who everyone gets behind. It would be even better if there was two bad teams because you get the battle of the minnows, like Marussia and Caterham a decade ago (and even better if HRT can be added to the mix as well). But as it happens I don’t think Andretti would be the new Manor Marussia anyway.

The only reason not to is prize money (building the extra garages would be nothing considering how much money Formula 1 has), and unless I’m very much mistaken Bernie Ecclestone didn’t even give prize money to the 11th team, so that is an option if Liberty feel like being stingy (considering how much money they have they don’t need to do this anyway).

It is ridiculous how difficult it is for a new team to join the grid, and Formula 1 should be doing more to make it easier, not saying ‘it won’t add value to the sport’ because it will.
@f1frog