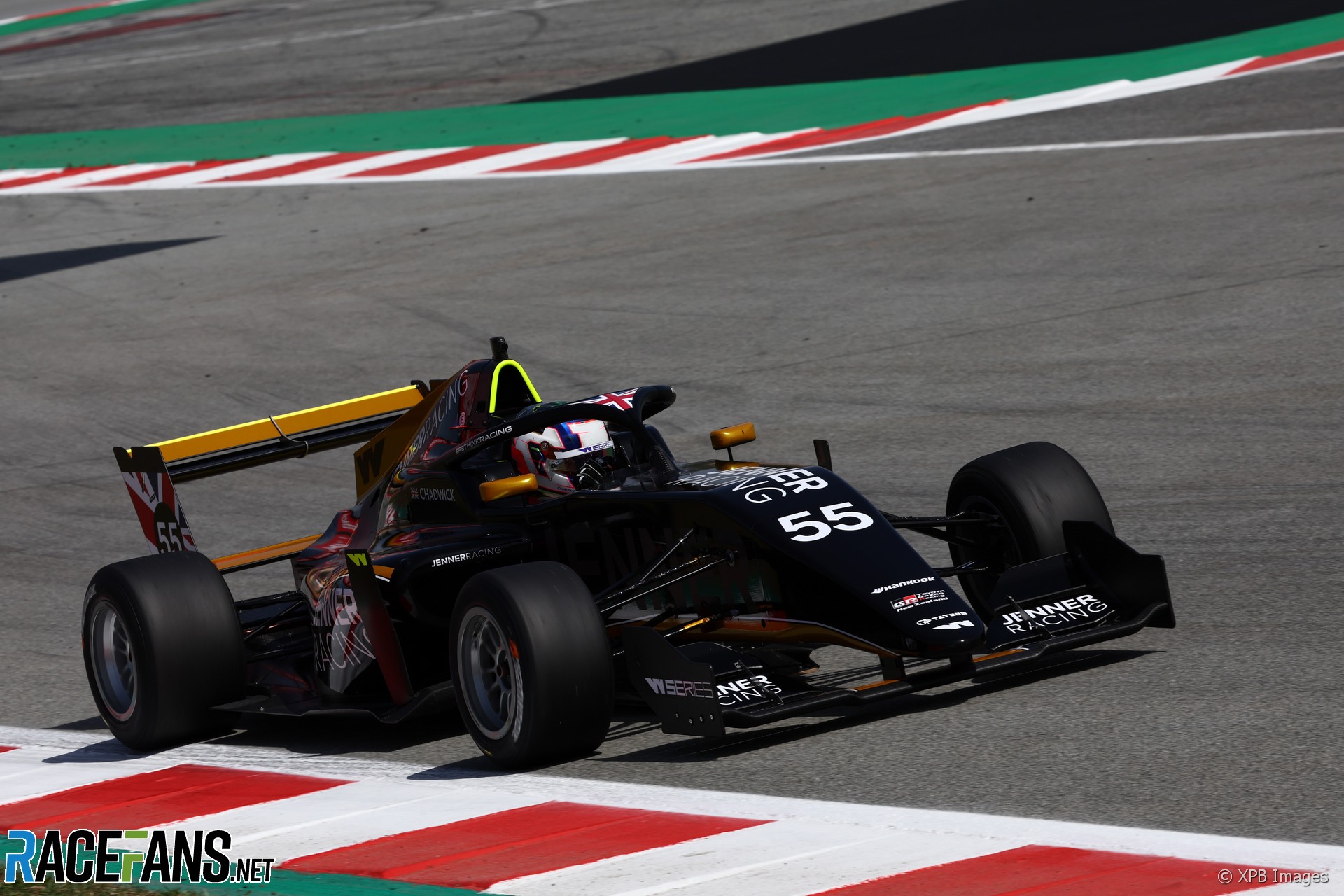 Jamie Chadwick has taken her third win of this season and fifth consecutive in the W Series in a lights-to-flag Barcelona victory.

Chadwick had started from a dominant pole, ahead of Alice Powell and with Abbi Pulling and Beitske Visser on the second row. Sarah Moore and Jessica Hawkins had looked quick during the early phases of qualifying but been ultimately relegated to eighth and ninth by track evolution while the pair of home racers, Belen Garcia and Marta Garcia placed sixth and seventh.

Chadwick kept the lead off the line, holding first into turn one while Pulling drew alongside and then ahead of Powell through the corner. Emma Kimilainen, starting fifth, took fourth from Visser through turn two.

W Series rookie Chloe Chambers, who had shown strong form in Miami, started fifteenth and gained places off the line only to run slightly wide while fighting with Bruna Tomaselli for thirteenth at turn five, dipping a wheel in the gravel that saw her slip down the order to sixteenth. Fighting back a few laps later, Chambers pushed Bianca Bustamante into a nearly identical off while overtaking her.

After ten minutes of race time, Powell was on the back of her protégé Pulling, considering a move into turn one. Without DRS in W Series, however, the corner seemed far less productive for overtaking than for those series that run the device.

Sarah Moore was similarly hunting down Jessica Hawkins for tenth, both having slipped backwards from the start. Hawkins defended for the whole of lap six but Moore showed DRS was unnecessary for an overtake into turn one at the start of lap seven, braking late and taking the place despite Hawkins fighting back through turn two.

Pulling initially never allowed Chadwick to draw out a major lead, staying within just over half a second despite her battle with Powell. With ten minutes to go, however, it looked as though Pulling was saving tyres either by necessity or strategy, the gap extending to closer to a second-and-a-half for much of the lap.

With W Series drivers only allocated two dry sets of tyres for practice, qualifying and the race, there was visible damage to several drivers’ tyres by the final seven minutes. Visser, in particular, was struggling enough to have started a train to Marta Garcia and Belen Garcia just behind her, Visser holding onto fifth but losing touch with Kimilainen ahead in the three-way battle.

Chadwick’s tyres, in the lead, also looked ragged with the front right visibly streaked with marbling and Pulling closed in to less than a second behind.

The train behind Visser, who was lapping a second behind the leaders by the final three minutes, was joined by Nerea Marti but Visser somehow managed to cling on ahead to keep fifth place.

By the final lap of the race, Pulling had closed back onto Chadwick to just over half a second adrift and was hunting down the race leader. Pulling was too far back on the main straight to make an attempt at turn one and Chadwick stayed error free around the lap, taking the chequered flag for her ninth W Series win and a clean sweep of this season so far.