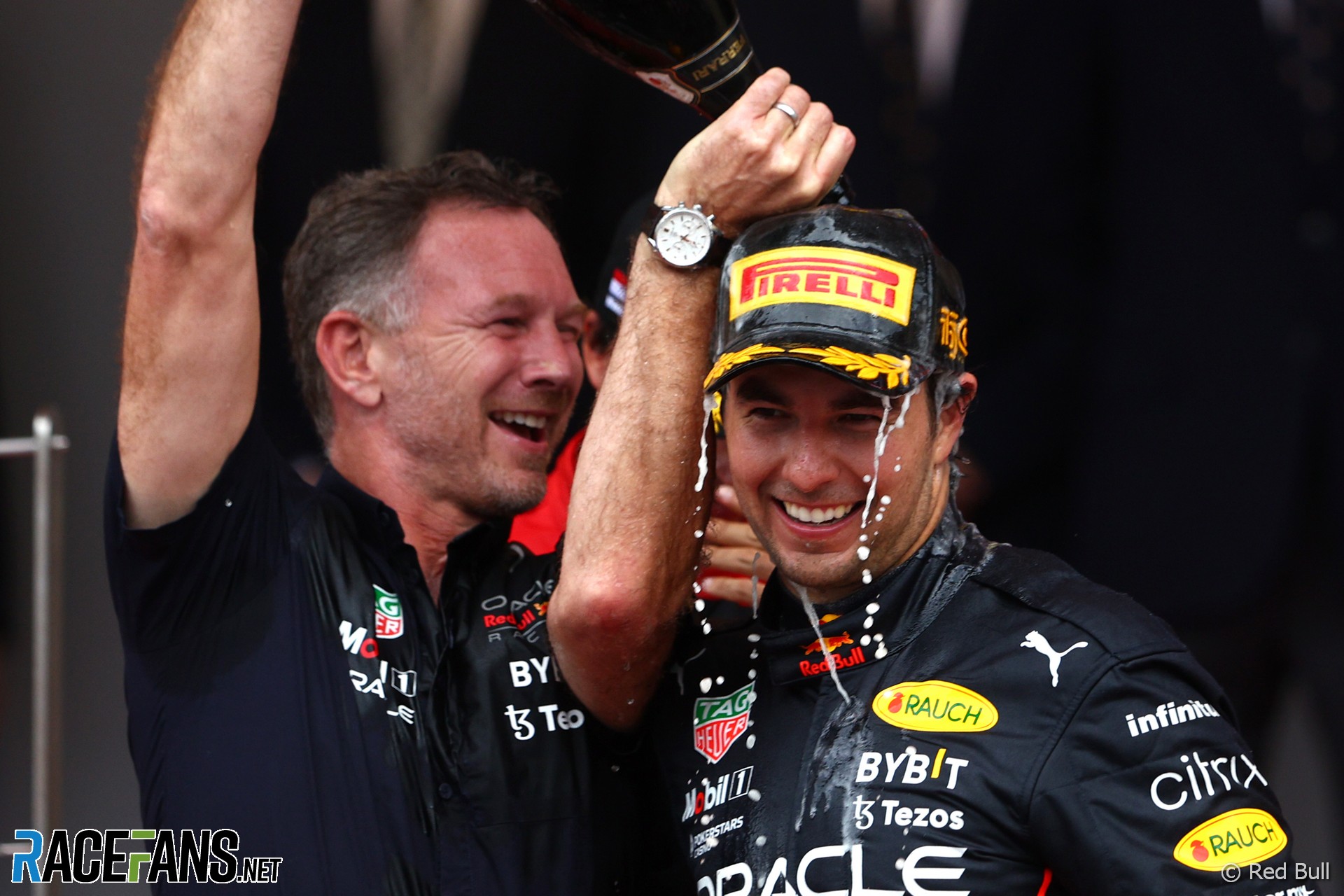 After being out-qualified by one of the Mercedes in Spain 10 days ago, Sergio Perez complained he’d missed out on useful running because reserve driver Juri Vips had taken over his car during first practice.

But he no longer has to worry about any of Red Bull’s young hopefuls taking over his drive in the medium term. The team confirmed today Perez will remain with them until at least the end of 2024.

This had been an open secret since Sunday, when following his victory in the Monaco Grand Prix Perez greeted team principal Christian Horner with the words: “I probably signed too early.”

The vote of confidence in Perez is huge and entirely deserved. It took a while for him to get to grips with his first Red Bull, the RB17B, which was moulded to meet Max Verstappen’s requirements long before Perez arrived.

But he got to grips with it and delivered excellent results in the latter stages of the campaign which helped Verstappen seal the drivers’ championship. Not only his celebrated defence against Lewis Hamilton in the Abu Dhabi decider, but his spirited tussle with the seven-times champion in Turkey.

This year’s car was drawn on a blank piece of paper and Perez has been a closer match for his team mate. In Saudi Arabia he even took a surprise pole position – the first of his career after well over 200 attempts – and was robbed of a potential win by the timing of the Safety Car.

He could have won in Spain, too, after Verstappen pitched his car into a gravel trap early in proceedings. Perez took a diplomatic line as Red Bull twice ordered him to wave Verstappen by and, despite having told him he would be repaid for his obedience, refused to let him by his team mate as Perez lost time behind him mid-race.

Publicly, Perez was firm but gracious in his objections, telling his team the tactics were “very unfair” but handling the matter behind closed doors.

However that was resolved, Red Bull finally have a satisfactory answer to the question posed after Daniel Ricciardo walked out in 2018, of who best to pair with the white-hot talent of Verstappen. Perez is quick – not Verstappen-quick, but few are – solid in his race craft, mature and likeable.

Plus, as Horner put it, “as a team player, I don’t think there’s anybody better in the pit lane.”

It’s a remarkable turn of events for a driver whose career looked in serious jeopardy less than two years ago. He inked a three-year deal with Racing Point (now Aston Martin) which should have kept him at the team until the end of this year, but the team cut it short by two years in 2020 in order to bring Sebastian Vettel in.

At that point, Perez’s last chance to stay in F1 was with Red Bull. The team’s efforts to replace Ricciardo had already led them to Pierre Gasly, who was jettisoned after half a season. By mid-2020 his replacement, Alexander Albon, was plainly struggling. At the end of the year Red Bull released Albon and gave Perez the gig.

This was a significant decision, as it was the moment Red Bull ended years of exclusively promoting drivers from their junior team to the Red Bull squad. Perez’s predecessors Albon, Gasly, Verstappen (though his apprenticeship was brief), Daniil Kvyat, Ricciardo and Sebastian Vettel had all arrived through Red Bull’s junior ranks and its Toro Rosso (now AlphaTauri) F1 junior team.

Now Perez is locked into that seat for the foreseeable. With Verstappen signed up until at least 2028, Red Bull’s roster of junior drivers can forget about getting a shot at the top team before 2025.

It’s a sizeable roster, too. It includes Gasly, who since leaving Red Bull has become a race winner, single-handedly scored enough points to put AlphaTauri sixth in the championship last year and is driving a fine if cruelly under-rewarded season so far.

Albon’s return to racing with Williams this year has had high points, too. AlphaTauri’s most recent recruit, Yuki Tsunoda, had a tough first season but is making clear progress this year.

That F2 quintet doesn’t even account for half of Red Bull’s junior contingent outside F1. But however bright those talents prove, F1 is already saturated with Red Bull-linked drivers, and the opportunity for them to move up in the near future further diminished today.

A key question now is what will happen to Gasly. Would Red Bull rather have their best long-term prospect in his seat, gathering experience for a potential 2025 graduation? Will AlphaTauri continue to hold an attraction for him now the prospect of returning to Red Bull has become even more remote? Pick the right team and F1 life after Red Bull is possible, as Carlos Sainz Jnr has shown.

Perez’s new deal has clear implications for anyone hoping to drive a Red Bull-livered F1 car in the near future. Red Bull’s top junior talents are going to have to demonstrate more than just speed, they’ll need to be patient too.