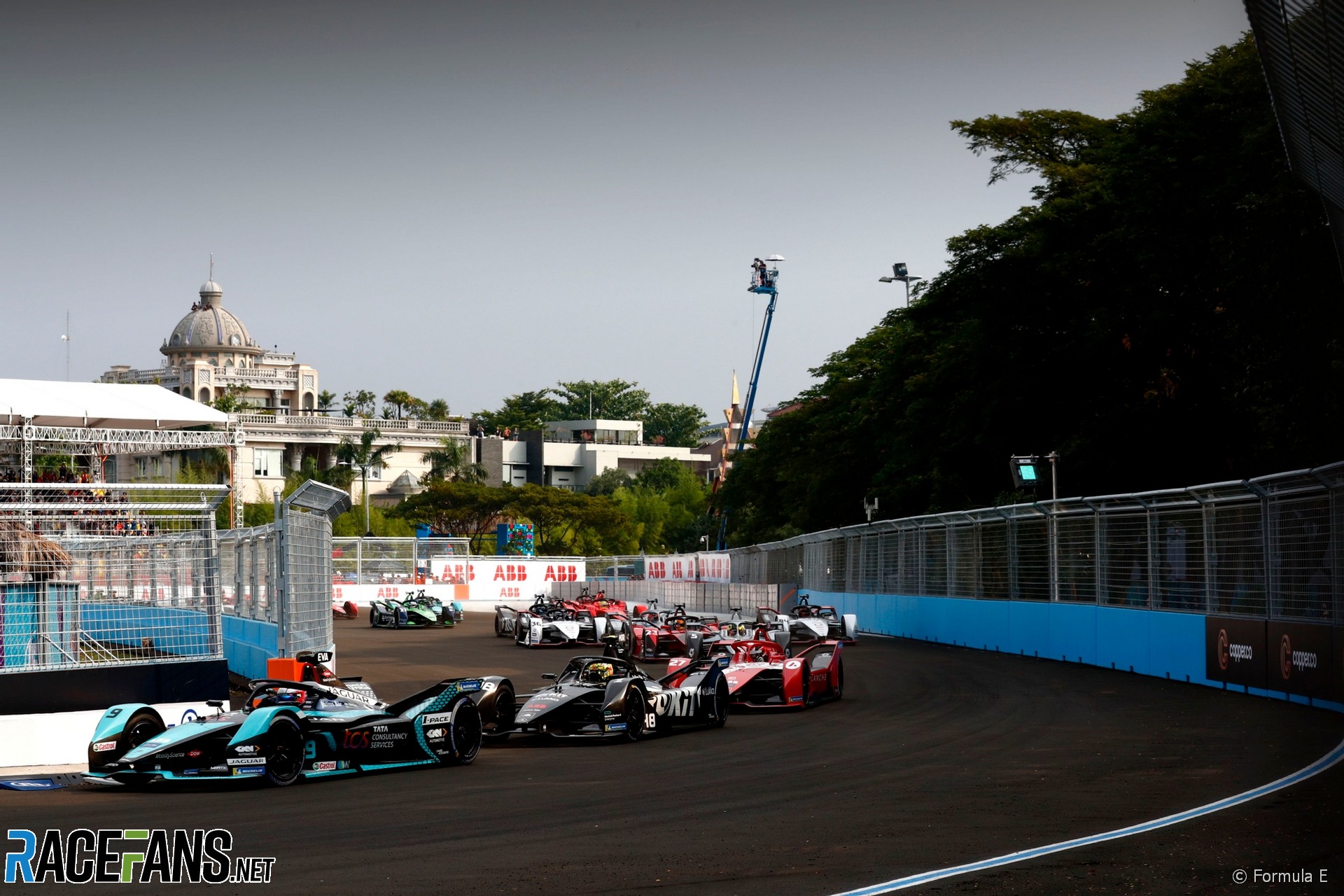 Mitch Evans claimed his third win of the Formula E championship in Jakarta after chasing down and passing Jean-Eric Vergne for the victory.

Vergne had led from pole for much of the race, until the final ten minutes when Evans managed to overtake him and hold off Vergne and Edoardo Mortara over a close final lap to win the first EPrix held in Indonesia.

After Techeetah secured a front row lockout in qualifying, with Jean-Eric Vergne beating Antonio Felix da Costa to pole position. When the lights went out at the start, Vergne held the lead on the long run down to the first corner, with Da Costa settling into second place ahead of Mitch Evans in third, Edoardo Mortara in fourth and Jake Dennis in fifth.

On the second lap, the Safety Car was deployed when Oliver Rowland somehow lost his left-front wheel off his Nissan and had to pull off the circuit, leaving his wheel stricken on the circuit. The offending item was cleared within a lap and the race resumed soon after.

Heading into turn seven, a mistake by Da Costa opened the door for Evans and the Jaguar driver did not need inviting twice, jumping into second place. Then on the follow lap, Da Costa locked up into the first corner, putting him under pressure from Mortara behind.

After just over ten minutes of racing, Vergne, Da Costa and Dennis became the first of the leaders to take their first of two Attack Modes for the race. Vergne dropped to second behind Evans, but gained the lead back when Evans took Attack Mode on the next lap, dropping behind Mortara but keeping his position ahead of Da Costa.

Da Costa took his second Attack Mode almost immediately after his first expired, dropping one position behind Dennis. The next lap, Mortara finally took his first Attack Mode from second place, giving the position back to Evans and emerging in third. Next, Vergne took his second Attack Mode, handing the lead to Evans. It would not be for long, however, as Vergne used his extra power advantage to catch and pass Evans for the lead back into turn one.

With just under 15 minutes remaining, Evans took his second Attack Mode and successfully retained second place ahead of Da Costa. That left the Jaguar driver with four minutes of extra power to try and catch Vergne for the lead of the race, however Evans could not get close enough to challenge the Techeetah out front. With just over five minutes remaining in standard race time, Evans eventually caught up to the rear of Vergne and sent a move to the inside of the leader into turn seven, taking the lead of the race.

Entering added time, the top three were all struggling for useable energy remaining and had bunched up with Evans, Vergne and Mortara all line astern. Over a tense final lap, Evans managed to keep the two behind him at bay and take the chequered flag ahead of Vergne and Mortara completing the podium with all three drivers crossing the line with zero useable energy remaining.

Da Costa finished fourth, ahead of Stoffel Vandoorne who retained his championship lead. Jake Dennis finished sixth, ahead of Lucas di Grassi, Pascal Wehrlein, Andre Lotterer and Sam Bird rounding out the points finishers after Andre Lotterer was penalised with a five second time penalty for causing a collision with Nyck de Vries, which led to the Mercedes driver’s retirement.

The next round of the Formula E championship will take place in Marrakesh on July 2nd.

3 comments on “Evans hunts down Vergne to win Jakarta EPrix”