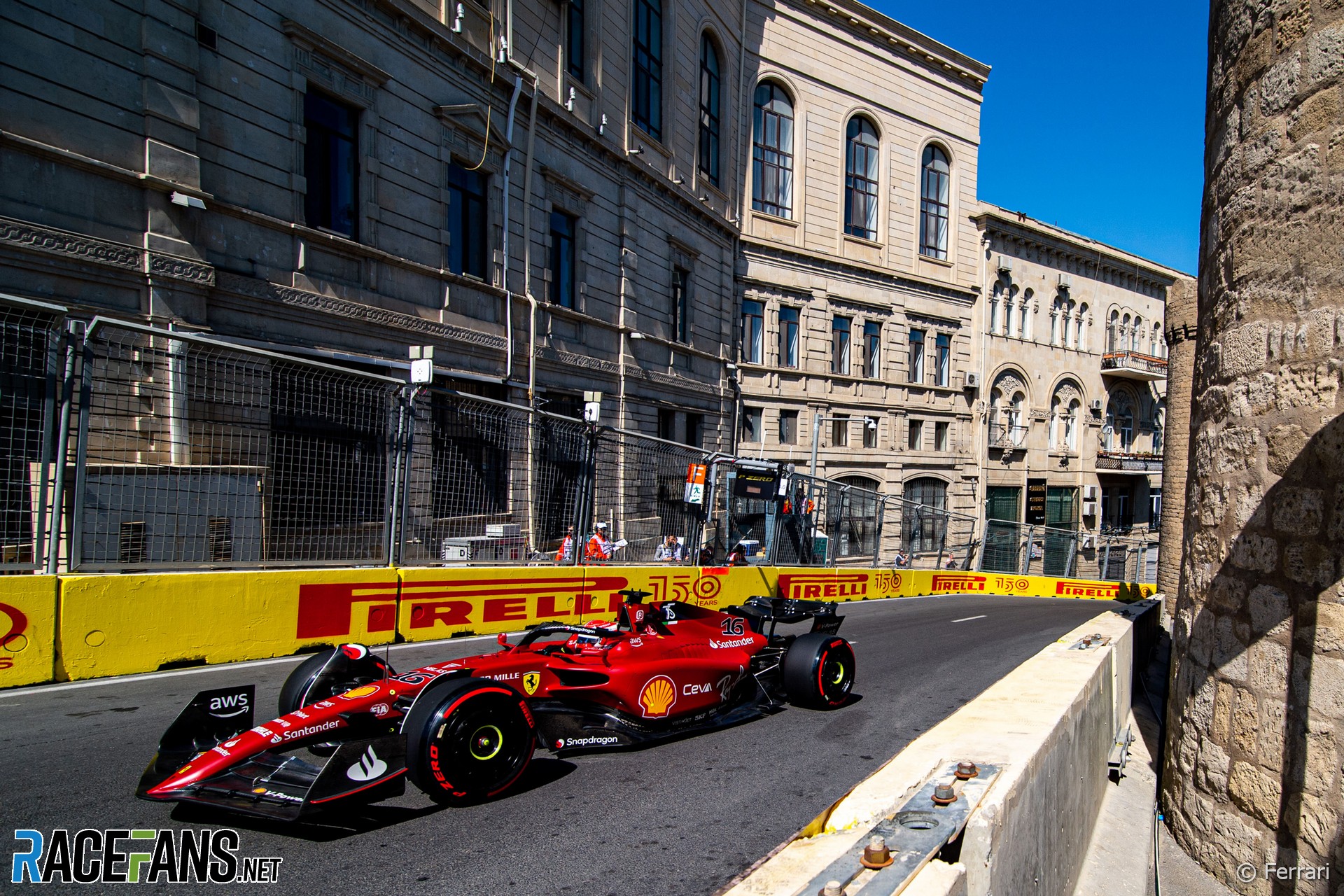 After its first five years as a host of the Formula 1 world championship, the Baku City Circuit in Azerbaijan has forged a reputation as a unique street circuit where chaotic races throw up unexpected results.

Looking at the times from Friday, it might be easy to assume it was a typical first day of practice by 2022 standards, with Charles Leclerc setting the fastest time only a quarter of a second quicker than the Red Bulls of Sergio Perez and Max Verstappen. But this is Baku and there is no such thing as a straightforward day in the cockpit around one of the most unforgiving venues on the calendar – especially in these heavier, ground effect cars of 2022.

Throw into the mix gusts of wind so fast they would break the pit lane speed limit at some circuits and it becomes easier to see why the many run-offs around the six-kilometre course greeted a wide selection of drivers on this first day of running.

“I mean, Baku’s hard enough normally,” said Lando Norris after ending his day as the tenth fastest driver. “But with the cars we have it’s worse over the bumps, it’s worse under braking, which makes it tricky.

The inconvenient gusts of wind caught out drivers across the field – even the two fastest drivers Leclerc and Perez, who both had to bail out of attempts to make it through corners and extract their cars from the escape roads. Sebastian Vettel also found the conditions a challenge.

“It was incredibly windy during FP1, which meant it was very easy to lock a wheel under braking or run up an escape road,” said the Aston Martin driver. “I had a couple of lock-ups, but otherwise it was a pretty smooth day.”

While the air over the cars was causing drivers difficulties, so was the airflow beneath them. After most drivers enjoyed a respite from downforce-induced porpoising around the slow streets of Monaco, the effect appeared to hit harder than ever in Baku.

Esteban Ocon said little could prepare him for the impact of the bumps that got so bad at points in practice he felt as if he was “going to lose my helmet at the end of the straight” and far beyond the physical challenge drivers anticipate.

“It’s not physical for the right reason, unfortunately,” explained one of the grid’s tallest competitors. “It’s very strange. It’s like oscillation, you can’t really train or get ready for it. It’s just painful on the body, really. I can feel the neck – it’s just getting me smaller. Hopefully I will lose a couple of centimetres for that…”

Mercedes have famously suffered from persistent porpoising problems more than most teams in 2022 and so it was no surprise when the first thing Lewis Hamilton had to say about his Friday when climbing out of his car was about his car’s bumpy ride. “The hardest thing about today was the bouncing, we’re hitting serious speeds at the end of the straight and bottoming out,” he said.

Hamilton’s team mate, George Russell, explained that other than porpoising, Mercedes have the secondary challenge of getting their tyres into the ideal temperature window, reflected in how Russell and Hamilton could only manage seventh and 12th fastest on the day.

“It was a tricky day and clearly we weren’t as competitive as we’d have liked to be,” Russell accepted. “It’s a tough track to get the tyres switched on and in the right window.

“You saw a number of other drivers set their fastest times right at the end of a run, whereas Ferrari and Red Bull seem able to just turn it on. At the moment, they have an inherently quicker car than us and we’re doing everything we can to catch up.”

Tyre warm-up was less of a concern for championship leader Verstappen. Despite ending the day third fastest behind his team mate, Verstappen appeared confident about Red Bull’s prospects over the weekend, despite his complaints of understeer over team radio.

“For once it seems like on a street circuit we can get the tyres to work over one lap – everyone, it seems like,” he said. “Because all the time you try on the second lap you already lose performance.

“It seems like Ferrari is quite quick over one lap again, the long runs look a bit more even so that’s positive.”

Behind Verstappen in fifth place in the times was not Verstappen, but Fernando Alonso’s Alpine. Having brought upgrades to Azerbaijan, the Alpine appeared to have impressive maximum velocity down the long main straight – best evidenced by Alonso pulling away from Yuki Tsunoda’s AlphaTauri along the entire straight despite Tsunoda exiting turn 16 staring at the Alpine’s rear wing. But Alonso himself is cautious about what Friday means for the rest of the weekend.

“We’ve been in this position some Fridays and then on Saturdays we come back to our normal position, which is between P7 and P10 or whatever,” Alonso said. “So it’s what we expect tomorrow – just fighting to enter Q3 and hopefully we can make it.”

As for the driver who ended the day fastest of all, Leclerc, he dismissed the idea that the second practice times were in any way reflective of actual performance. “The lap times are not representative, because no one put a proper lap together in the second session,” he said. “There is still quite a bit of room for improvement.

“There are still quite a lot of question marks. I think the positives to take away from today is that the tyre degradation was good and the race pace was very strong, so that is good.”

Such is the nature of the Baku circuit, Saturday will not decide the end result on Sunday by any means. However, with only one hour left of running before qualifying, those who are struggling to get on top of their cars have precious little opportunity to find a solution before they are locked in for what could be one of the most physically demanding races of the season.

RaceFans is run thanks in part to the generous support of its readers. By contributing £ per month or £12 per year (or the same in whichever currency you use) you can help cover the costs of creating, hosting and developing RaceFans today and in the future.