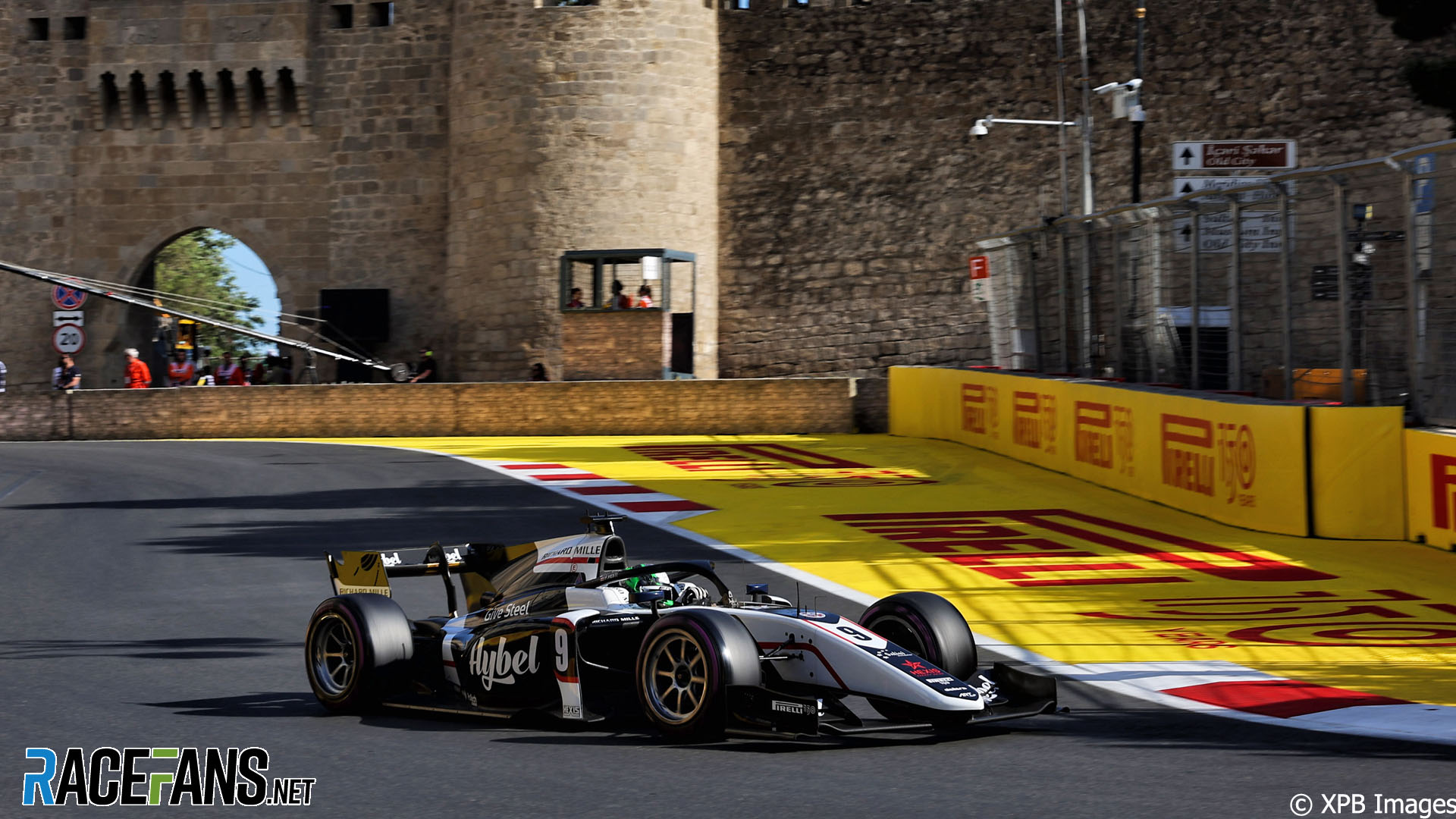 Jake Hughes had been on the partially-reversed-grid pole, Vesti starting alongside him and with Jehan Daruvala and Logan Sargeant on the second row.

Track temperature at the race start was considerably higher than during qualifying yesterday, at 48C. The earlier start time for the sprint race of 13:30 local meant that temperature would be set to rise over the 21 laps.

Vesti took the lead off the line but Daruvala also had an excellent start and was able to pass both Hughes and Vesti to have the lead into turn one. Vesti, an F2 rookie, couldn’t slow his car enough on cold tyres and went too deep into turn one, letting both Daruvala and Hughes past.

Daruvala was able to build a substantial gap in the opening laps, a second and a half ahead of Hughes on lap four.

Jack Doohan had visible damage to his front wing from the kerb in turn one, which was destabilising his car considerably. On lap four he was called into the pits by his Virtuosi team in order to change the wing, after being shown the black and orange flag.

Vesti managed to pass Hughes around the outside of turn three, at the start of lap six and the tumble down the order seemed to start in earnest for Hughes, the Vam Amersfoort car not managing tyres as well as others. By lap nine he was overtaken for fifth and then sixth by Marcus Armstrong and Felipe Drugovich, the Hitech around turn one and then Drugovich passing through turn three.

Just two laps later, constantly being fed back into other drivers’ DRS range, the pole sitter was 12th. Théo Pourchaire, however, who had a disastrous qualifying that saw him set to start both races in 12th and had fallen further back early on in the sprint race, was duelling with Jüri Vips for the final points-paying position in eighth.

The Safety Car was deployed on lap 14, after Dennis Hauger attempted a move on Pourchaire into turn three that failed to pay off and put his Prema in the barriers. Lasting until lap 16, the restart saw Daruvala hold the lead but with Vesti closed up to him and an error from Logan Sargeant letting Richard Verschoor through to third.

By lap 17, another Safety Car was called as Enzo Fittipaldi locked up and tagged Vips into turn two, the Charouz needing recovery while the Hitech limped back to the pits.

Vesti took advantage of a brief restart on lap 18 to pass Daruvala out of turn one after the leader locked up slightly, out-dragging the Prema out of the corner and managing to find more grip.

On lap 19, Verschoor threw away a potential podium colliding with the barriers into turn two. Vesti was given his first ever Safety Car restart in F2 on lap 21, for a single-lap shoot-out to the end.

Vesti got away cleanly while a shower of polystyrene exploded from the TecPro behind him due to multiple drivers crashing into turn one. Ralph Boschung appeared to push Calan Williams into the barrier, whose car was then in the way of Cem Bolukbasi, both ending up buried in the TecPro.

Vesti crossed the line comfortably ahead of Daruvala, the yellow flags in sector three having neutralised any final racing moments and with Liam Lawson taking the final podium position, having started eighth.