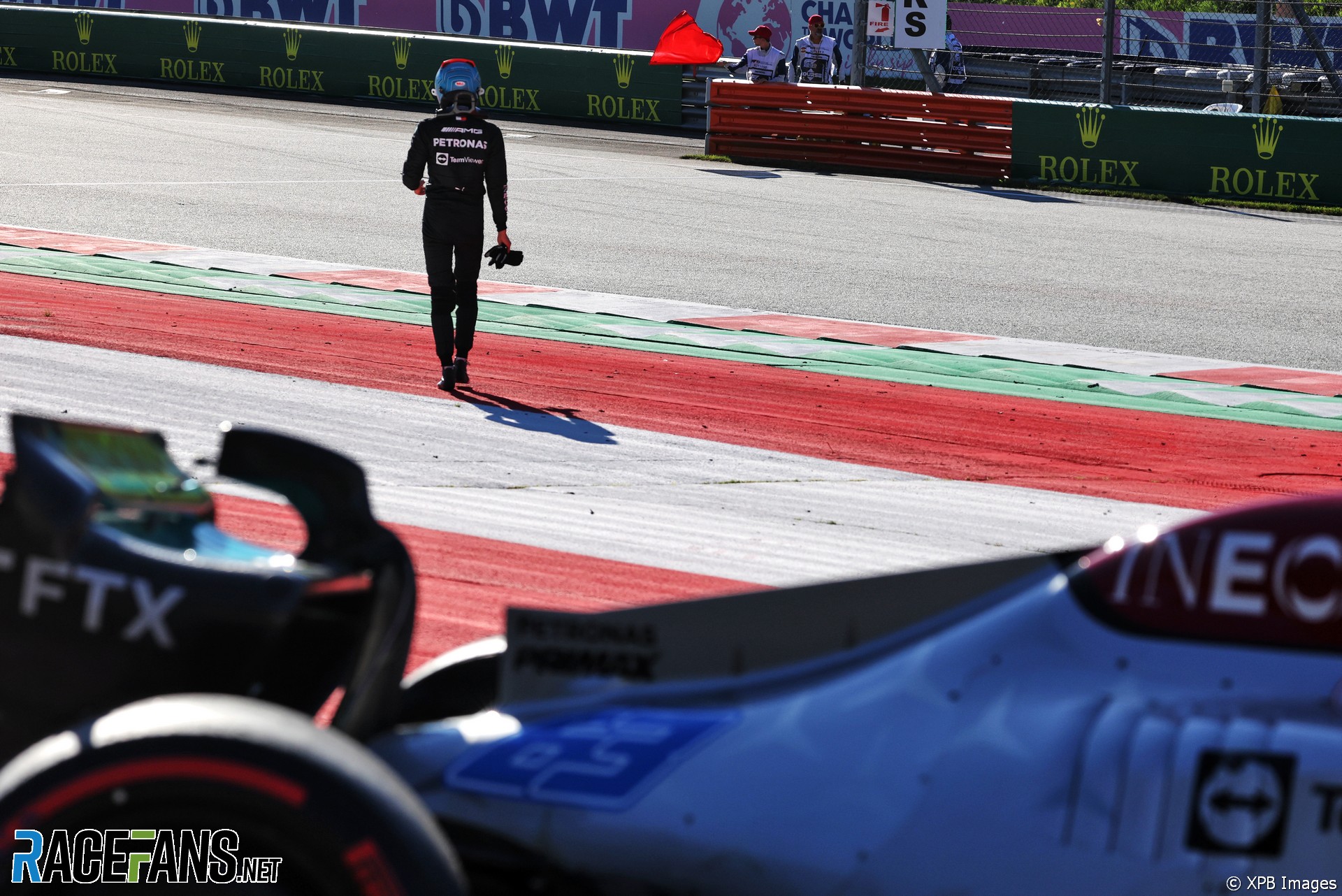 In the round-up: George Russell was warned by the Austrian Grand Prix stewards for walking across the race track after crashing in qualifying.

Russell warned by stewards after walking across track without permission

Mercedes driver George Russell was warned by the Austrian Grand Prix stewards after walking across the race track back to the pits following huis Q3 crash at the final corner.

Russell was deemed to have walked across the track and onto a part of the pit lane unlimited by a speed limit “without permission from any marshals”. He began walking across the track when a group of cars including Kevin Magnussen, Mick Schumacher, Fernando Alonso and Carlos Sainz Jnr were all entering the pit lane following the red flag.

Russell is the second driver to have been found to have entered the rack track without permission this season. In the Australian Grand Prix, Sebastian Vettel was found to have breached the same FIA regulation after using a scooter to ride back to the pit lane using the race track after breaking down in practice. Vettel was fined €5,000 for the incident.

Aston Martin driver Lance Stroll says the team lack mechanical grip in low speed corners after both he and team mate Sebastian Vetter were eliminated in Q1 in Friday qualifying for the Austrian Grand Prix.

“Our baseline pace isn’t really there,” Stroll explained. “We don’t have the load we need in the high-speed corners and we’re just not mechanically very good in the low-speed corners and the balance isn’t great. So when you’re dealing with all that stuff it’s always challenging.”

Lewis Hamilton said that seeing fans at Silverstone was a highlight of the weekend for him, especially as F1’s audience gets less homogenous.

“I mean, generally was a really great weekend. I think all round, having seen the sea of fans at Silverstone was incredible,” said Hamilton, ahead of the Austrian Grand Prix.

“Just when you think it can can’t get better or can be a better weekend each year, it seems to improve. And also you’re seeing a crowd that’s becoming even more diverse than it was in the past, which is great.

“I think it was really positive for us as a team to start to see a little bit of consistency, particularly on my side, and to see us making progress.”

Following his termination as Red Bull test and reserve driver after being heard using a racial slur during a Twitch stream, Formula 2 driver Juri Vips was given the opportunity to continue racing for the Hitech team over the rest of the season.

At the time, F2 said in a statement that it would not have made the same decision as Hitech to continue to field the 21-year-old. After qualifying second at the Red Bull Ring, Vips responded to F2’s statement, saying he “completely accepted” the series’ position.

“I did a huge mistake,” Vips said. “I offended a lot of people and yeah, they’re completely right to say these things.

“I’m just very humbled and thankful to Hitech to give me a second chance. But now my main objective is obviously to continue with the season and give them good results, but mainly to just become a better person and show everyone that I learned from this.”

Asked by RaceFans about his position in the Red Bull Junior Team, Vips, who was wearing an unbranded race suit, said: “I would prefer not to comment.”

Interestingly, circuit wind sensors sited at two points closest to where @LewisHamilton went off in Q3 recorded their highest gusts during the qualifying hour at 17:55-56 local, essentially as the incident occurred. Prevailing wind (arrow below) was WNW. #F1 #BBCF1 #AUSTRIANGP pic.twitter.com/jWYESF7lE7

Dear all , as I’ve seen many of you have been asking what is going on with my neck, I’m here to clarify this. I have been diagnosed with a severe Facet syndrome. I want to thank everyone for the continuous support!

Agreed. There is actually gravel in some corner at the Red Bull ring, why do you need track limits there when there is a natural one ?

I know it's the future and there is no stopping it but I HATE anytime I have to stream a live sporting event that is also live on broadcast television. The delay pretty much ruins the experience if you like to be on twitter during a game and interact with folks. https://t.co/cq4F1S4nvI

"Jeez, it was a pinball machine" 🎙

Had to remove the the JPS livery today ☹️ pic.twitter.com/bJydYT11Xp

"The racing team principal... was recorded appearing to break the law at a roundabout in his James Bond-style DB5."

"Wings for Life is an incredible charity trying to find the cure for spinal cord injuries. I hope that we can raise awareness and vital funds for its research, and I look forward to meeting the highest bidder in Abu Dhabi at the end of the season."

"On the same day when a record 140,000-strong crowd piled in through the Silverstone gates, Mirror Sport was granted access to explore the Formula One team’s premises and watch the action unfold from the team's unique perspective."

"We love working with him. He loves the team. We’ve seen when we give him a car that’s capable of winning, he can win in it."

"Walkinshaw Andretti United director Zak Brown has stated that he will attend this year’s Repco Bathurst 1000."

All in. All welcome. All celebrated. (Aston Martin)

"Throughout the week of this year's British Grand Prix, we used our home race as an opportunity to share the message that no matter who you are, our team and the sport are open to all."

"The return of Formula 1 to Kyalami is a no-brainer. While the circuit needs substantial upgrades in order to adhere to the modern standards and circuit rules, that cost is still likely to be lower than that of staging a street race in either Cape Town or Durban."

"Can you keep a straight face? For Max Verstappen and Sergio Perez, the answer is... clearly not."

F1® 22 | Original Game Soundtrack (Behind the Scenes) (Codemasters via YouTube)

"Ian Livingstone is synonymous with Codemasters and the F1 soundtrack, having composed six previous F1 titles."

"Did you notice Angela Ashmore on victory podium of the Indianapolis 500 with Marcus Ericsson? In this episode of NTT Meet the Paddock, get to know Angela and more about her role with Chip Ganassi Racing."

How To Change A Tyre On A Racing Car? | FIA Girls on Track (Formula E via YouTube)

"Ever wondered how to change a tyre on a Formula E car? From the tyres itself to the tools needed, Rachael Patterson from Dragon Penske Autosport tells you everything you need to know."

Thanks to everyone who joined in our Caption Competition this week, which was won by @Tom-L: 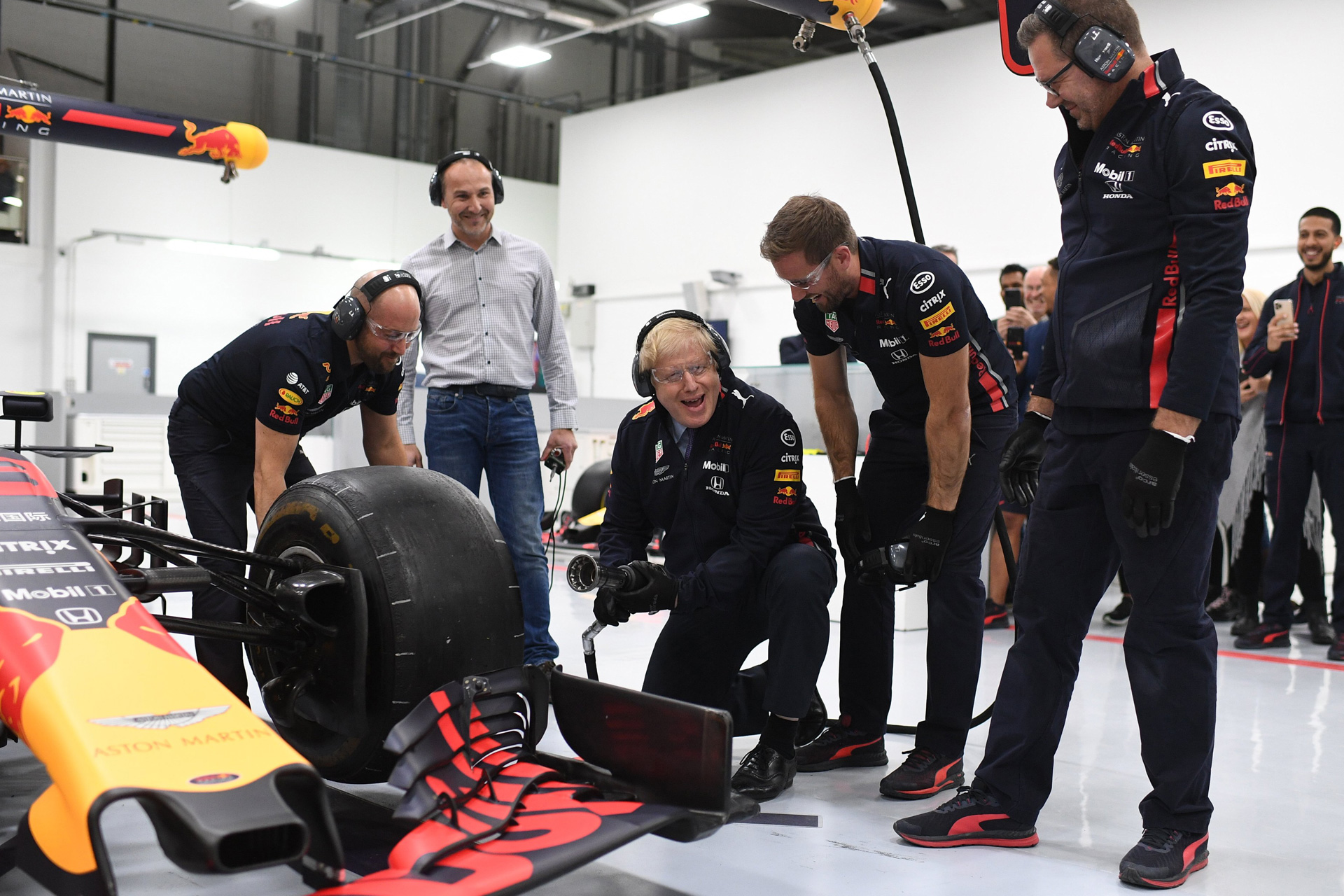 Boris was all smiles, but everyone else was left wondering why the nut still hadn’t been removed
@Tom-L

We had loads of great captions for this one, so thanks also to Mark Fletcher, Keith Campbell, Todfod, MarcusBreeze and Proesterchen for more amusing suggestions!