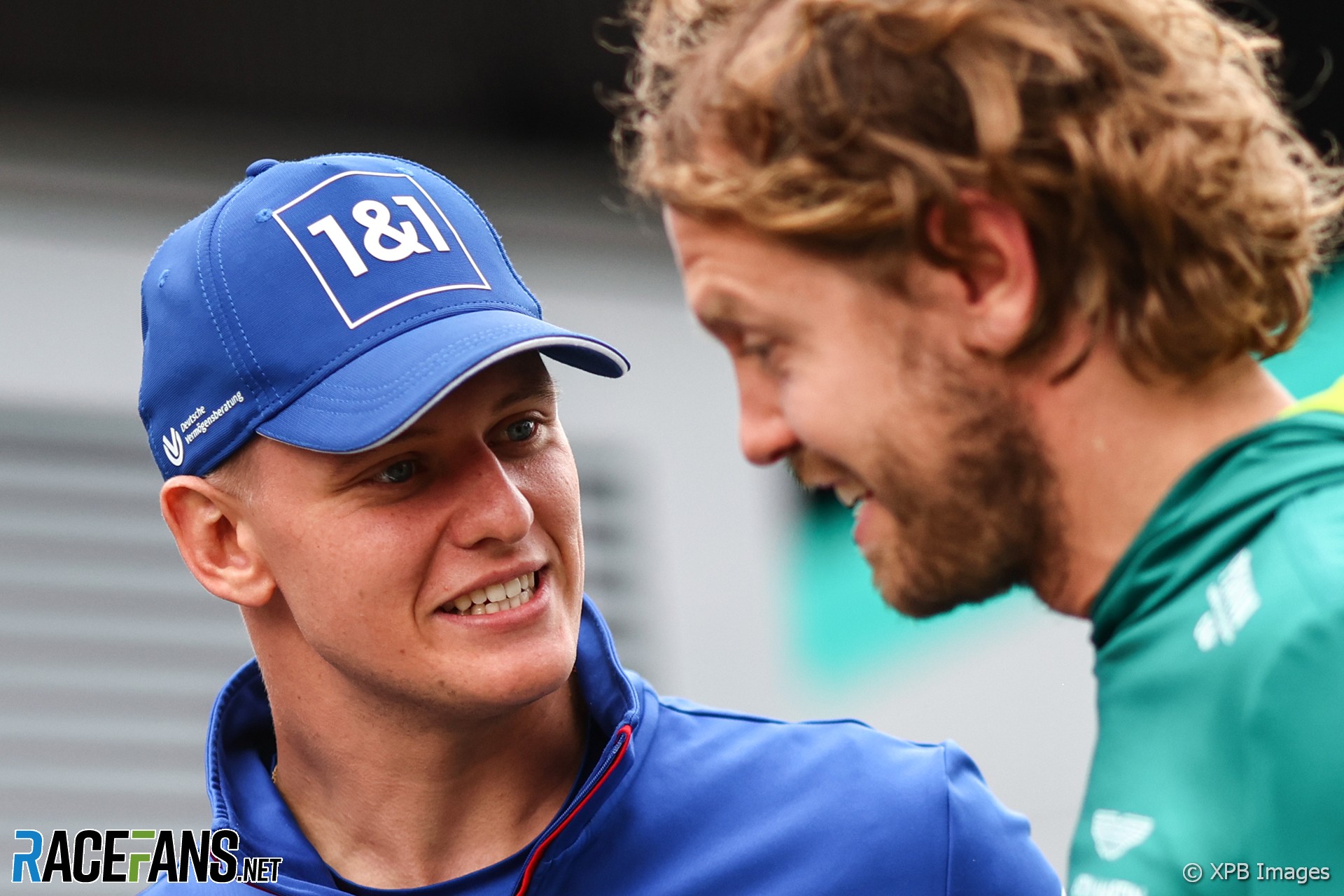 In the round-up: Mick Schumacher says he understood why Sebastian Vettel walked out of a drivers’ meeting last week, for which he received a suspended fine.

Vettel was fined €25,000 for leaving the meeting before he was supposed to last Friday. Schumacher explained how frustrations grew between drivers in the discussion over enforcement of rules in F1.

“I just felt like we were going in circles with some of the things that were discussed,” said Schumacher. “It kind of was getting longer than necessary. I fully understand the reaction from Seb and I think there were a lot more drivers that kind of felt the need to maybe leave the briefing as well.”

The Aston Martin driver refused to elaborate on what happened in the meeting when asked after Sunday’s race.

Alexander Albon said the first proper race outing for Williams’ upgraded car, following his first-corner retirement at Silverstone, was “at some points exciting.”

“We were running P10 at one point, which I was really happy about,” said Albon after finished 12th on Sunday. “Our pace was much better than yesterday.

“With the medium tyres we took a step up in performance and I was happy. I felt like it’s our first proper race with the new aero package.

“We will learn a lot from today, we’ll have a look at the data and conclude where we are strong, where we are weak. We’re clearly still missing a little bit but we’re still getting to grips with the car. I felt as a a genuine debut outing, first outing for the car, it was not a bad day.”

The huge clouds of orange smoke produced by fans at the Red Bull Ring did not present serious problems for drivers, though it did obscure their visibility at times.

“On the formation lap, you couldn’t see the apex of turn seven, and at the end of the race, you couldn’t see anything through turn six,” said Lewis Hamilton. “So fortunately, it wasn’t necessarily the case during the race but maybe they should just save them more so for the end? I can’t believe they’re already good environmentally either.”

Max Verstappen said he “saw one flare they threw onto the track or into the grass, I think that’s the only thing they shouldn’t do.

“But as long as you keep it on the grandstand, the wind blows it over the track for like one lap, so it doesn’t arrive within the track. I think it’s okay.”

'The Supreme Court judges handed down the sentence on Monday, five years after (former F1 team boss) Mallya was found guilty of contempt of court for allegedly transferring $40m (£33.6m) to his children even as bank loans to Kingfisher Airlines remained unpaid.'

Armstrong's Guest Column: Textbook win but it could have been more (F2)

'It’s funny how strict the security guards are at the Red Bull Ring. As I was walking back from the press conference, they didn’t allow me to come back into the paddock because I didn’t have my pass despite having my race suit on, carrying my trophy and a bottle of champagne having just won and come from the podium. '

'Obviously, at that point I knew I was on the cusp of points, so I was focused on having a good restart and staying out of trouble. I was lucky to avoid the accident in turn one and managed to gain some positions and finish P10.'

'An anonymous hotline to call or number to text, plus relevant signage on each ticket and grandstand, would be an excellent way of reporting abuse or unacceptable behaviour.'

There was room for improvement in the recovery of Carlos Sainz Jnr’s burning Ferrari on Sunday, says Kris Lord:

Normally parking on the access road is a good idea, but when it’s a slope that’s always going to be an issue, especially if you need to get out the car quickly, so I’d say Carlos could have positioned the car better.

However that doesn’t explain the poor marshalling. On the video there’s a man with extinguisher who puts his down and then goes somewhere – perhaps to get in the rescue vehicle? Also I’d you’re positioned on a slope having some wheel chocks bigger than a Toblerone would be useful.

In previous races the first hint of smoke and there’s marshals eager to spray the car and this just seemed the opposite – real fire and only one marshal trying his best on his own.
Kris Lord