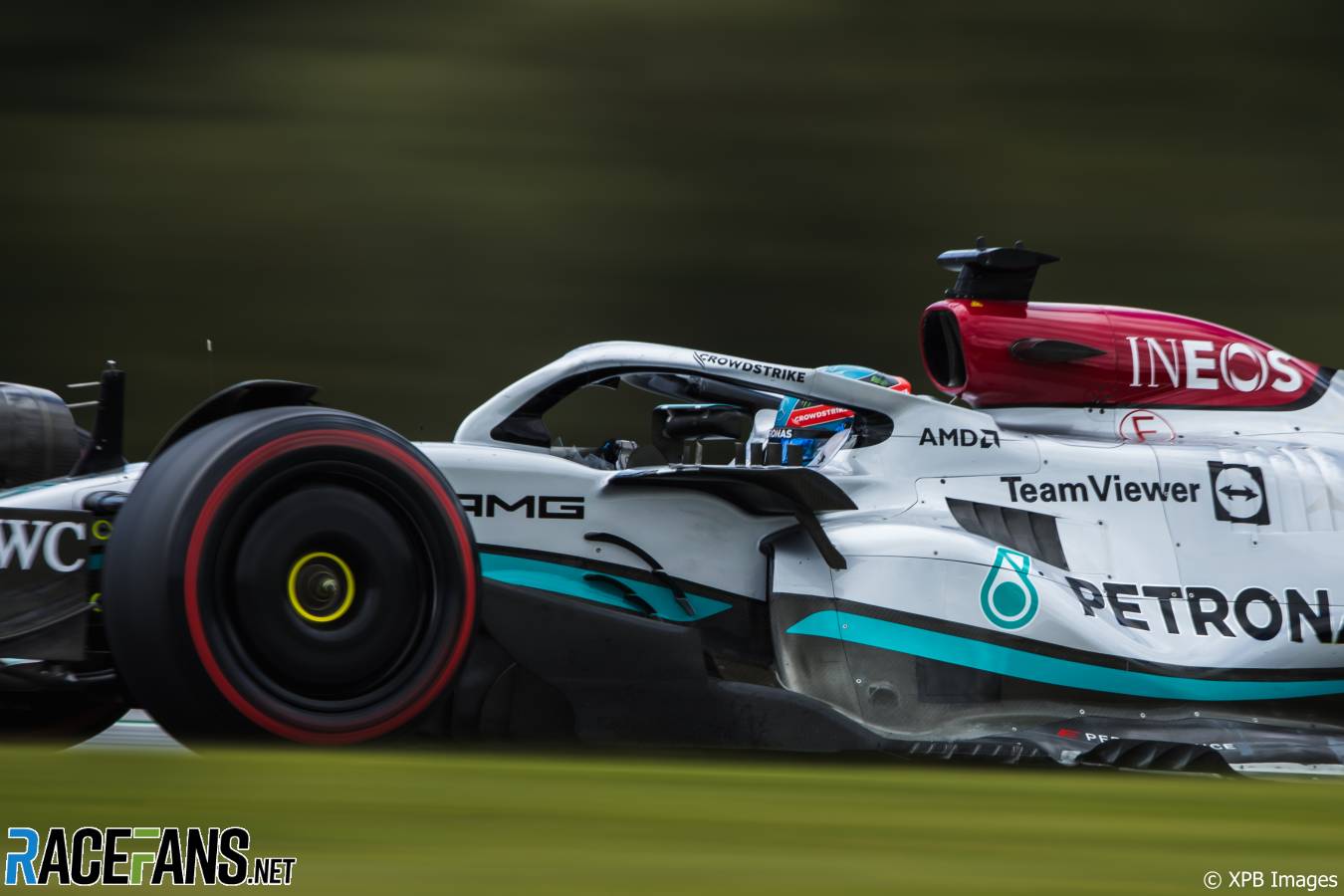 In the round-up: Red Bull team principal Christian Horner expects Mercedes will not be far away from his team’s pace this weekend in France.

Mercedes could have a strong weekend on the Paul Ricard, Christian Horner believes.

After gradually upgrading their car over the course of the season, Mercedes have closed the performance deficit to their rivals ahead in recent rounds. Due to the fast and smooth nature of the French circuit, Horner says Mercedes could be in contention this weekend.

“We’d expect them to be quick in [Paul] Ricard,” said Horner. “They’re showing flashes of being there or thereabouts.

“The last two races have been pretty decent for them. There’s been no sign, I think, of any porpoising at all. So they seem to be slowly bringing themselves back into the game.”

Horner says Mercedes could become “contenders” at the front of the field if they continue on their development trajectory.

“They keep consistently scoring points,” he said. “Sometimes having more cars in play is a good thing, sometimes it might be a bad thing. But I think for the fans, it’s great to have six cars competing for victories.”

Formula 2 driver Jake Hughes will miss both the Paul Ricard and Hungaroring rounds of the championship after his Van Amersfoort team announced he had tested positive for Covid.

Hughes, who currently sits 15th in the drivers’ championship after 16 races, will be replaced by David Beckmann for the two rounds. Beckmann had previously stepped in for Charouz at the Imola round of the championship after Cem Bolukbasi had to miss the event following injuries sustained in a heavy crash in Saudi Arabia.

Mario Andretti sent his congratulations to Scott Dixon after the Ganassi IndyCar tied his career wins total on Sunday. “Utmost respect for my friend Scott Dixon and truly happy to congratulate him on 52 wins,” Andretti wrote on social media. “Also congratulate his team because nobody does it alone. I hope this is just a step on your continuing journey. Well done.”

Asked what Andretti’s words meant to him, Dixon said: “It means a lot. I love Mario. I love Mario for so many reasons, what he’s done in the sport, and achieved, and what he gives back to the sport. I feel extremely lucky to have the likes of himself and AJ [Foyt] here most weekends. Even to sit and chat with these guys, the generations that they raced in or the time they raced is a lot different from now.”

“It means a lot to me to even be mentioned in the same conversation as these greats. I never thought it was possible.”

Dixon’s victory at Toronto means he has taken at least one win for 18 consecutive seasons, a streak dating back to 2005. This is his 20th season with at least one win in American open-wheel racing, which began with his rookie campaign in the 2001 CART season with PacWest.

The Mercedes Formula 1 team have announced a “multi-million-dollar” investment in ‘sustainable aviation fuel’ (SAF) in a bid to help reduce the team’s carbon footprint.

Aviation emissions account for over a quarter of the team’s carbon footprint and Mercedes believe the investment will help them to almost halve the carbon footprint of transporting their team personnel by aircraft.

“Sustainable aviation fuel has the potential to transform the way we travel and the impact that we have on the environment,” said team principal Toto Wolff.

“This is a topic that I think about a great deal personally as well as professionally. I fly a lot; the team flies a lot. If we must fly, then we need to find a better way to do so and SAF is the best solution available to the aviation industry right now.”

We miss you, Jules! 🙏 pic.twitter.com/VSWUnAn0fY

Everything is possible if you chase your dreams

We can’t wait for you to see it, out this Thursday (5pm CEST)! pic.twitter.com/Pfk3OmGmop

"The main things I like of this championship is the pre-race and the street track. You can never race in other categories in New York, Rome, London - for sure it’s really good for the championship. The other (off-track) side is more calm, less stress compared to F1 I would say. It’s a lot of difference."

"Sentronics will provide the separate ‘Team’ and encrypted ‘FIA’ fuel flow meters which make up the dual-sensor package which has been required in each Formula 1 car since the 2020 season. ‘Team’ sensors are also available to F1 power unit manufacturers and fuel suppliers for research and development use."

"The next generation of our cutting-edge SAW (Surface Acoustic Wave) Torque System has been successfully delivered to one of our leading motorsport clients, who will mandate the part across all entrants. This next generation product is designed specifically for the series’ new hybrid era, which will debut in 2024."

Palou contract fight is business, not personal (The Washington Post)

"Brown has said there are 'mechanisms' in which Ricciardo and McLaren can split at the end of this season, but it is believed Ricciardo is the one who holds the option and the Australian has insisted he’ll be back in 2023."

"In this video you will see the process of a Renault Energy F1-2015 1.6L V6 Turbo engine being mounted in Max Verstappen's 2015 F1 Toro Rosso STR10 chassis number two. The assembly took place at Van Amersfoort Racing in the Netherlands."

"The second of our 'Feature Focus' series for F1 Manager 2022 dives deep into more key features you'll control away from the track: Facilities, Sponsorships, and Finances."

"We heard you guys like video games, so here's a little present!"

With Alexander Albon already halfway towards a race ban after collecting six penalty points since returning to Formula 1, @SjaakFoo questions if penalty points are being handed out too eagerly by stewards…

I honestly think penalty points are not being used in the spirit they were intended, as to prevent dangerous driving. We’re giving out penalty points for almost every infraction, including a lot where no danger was posed from the infraction.

Some of the things that have been given penalty points:
“Crossed pit entry line”
“Ignoring blue flags”
“Left track”
“Gained advantage off track”

Like, cool, those are all things you can give penalties of various degrees for because they broke a rule, but do we really need to hand out penalty points leading to a potential race ban because you put your car all four wheels over a white line?
@SjaakFoo