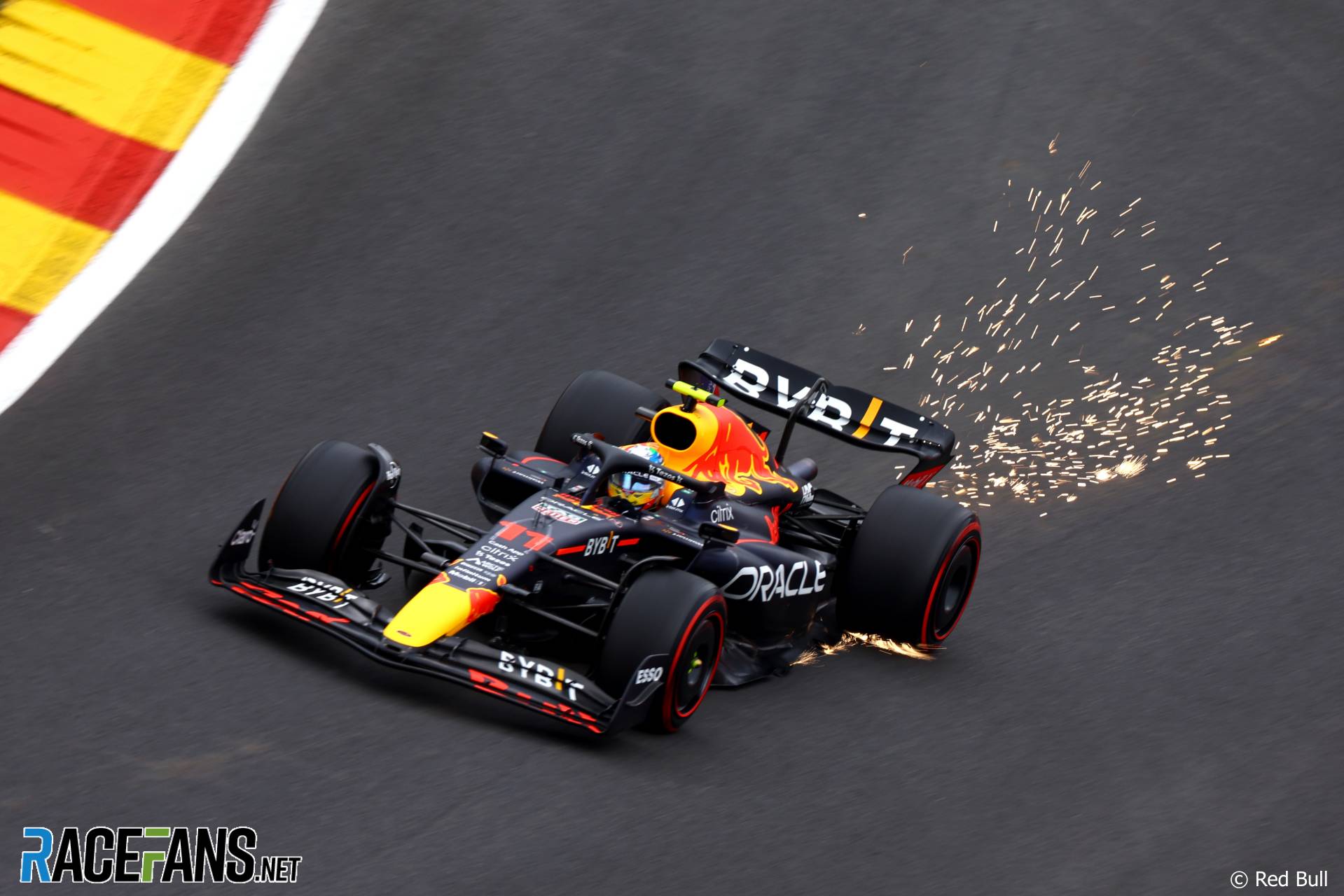 Sergio Perez heads into qualifying for the Belgian Grand Prix having set the fastest time in final practice ahead of team mate Max Verstappen.

Perez’s final flying lap saw him take the fastest time overall, just a tenth ahead of his team mate. Carlos Sainz Jnr was third fastest for Ferrari with Charles Leclerc seventh after spinning lightly into the barrier at Fagnes.

Cloud cover hung over the Spa circuit as the cars ventured out for the start of the final practice hour of the weekend. Forecasts indicated a 30% chance of rain during the session, but the track stayed dry.

Both Red Bulls and both Mercedes took to the track on used soft tyres to carry out high fuel runs, allowing the two Alfa Romeos of Zhou Guanyu and Valtteri Bottas to set the early pace on new softs ahead of the Aston Martins of Lance Stroll and Sebastian Vettel.

It took until almost halfway through the hour before Ferrari took to the track for the first time. Heading out on new soft tyres, Sainz immediately jumped to the top of the times with a 1’46.461, while Leclerc went second fastest after his first effort. Alexander Albon used the strong top speed of his Williams to split the Ferraris and go second, before Perez used a fresh set of softs to lower the fastest time overall to a 1’45.972, nearly half a second faster than Sainz.

Leclerc attempted to improve with another flying lap, but lost control of his car on the entry to the Fagnes chicane and spun backwards into the tyre barrier. The contact with the wall was gentle enough to allow him to drive out of the gravel and back onto the track, but with manor bodywork damage to the rear of the car.

Despite the Ferrari able to drive out of the gravel unaided, the session was red flagged. After a brief delay, the session resumed for the handful of minutes still remaining. Perez headed out on another new set of soft tyres and put in a 1’45.047 to top of the times, a tenth quicker than his team mate.

The chequered flag fell to tend the session, leaving Perez fastest ahead of his team mate. Sainz ended the session third-fastest, seven tenths of a second behind Perez, with Norris in fourth position.

Fernando Alonso was fifth fastest for Alpine, with George Russell in sixth for Mercedes. Leclerc finished the session down in seventh, ahead of Sebastian Vettel, Esteban Ocon and Pierre Gasly completing the top 10.