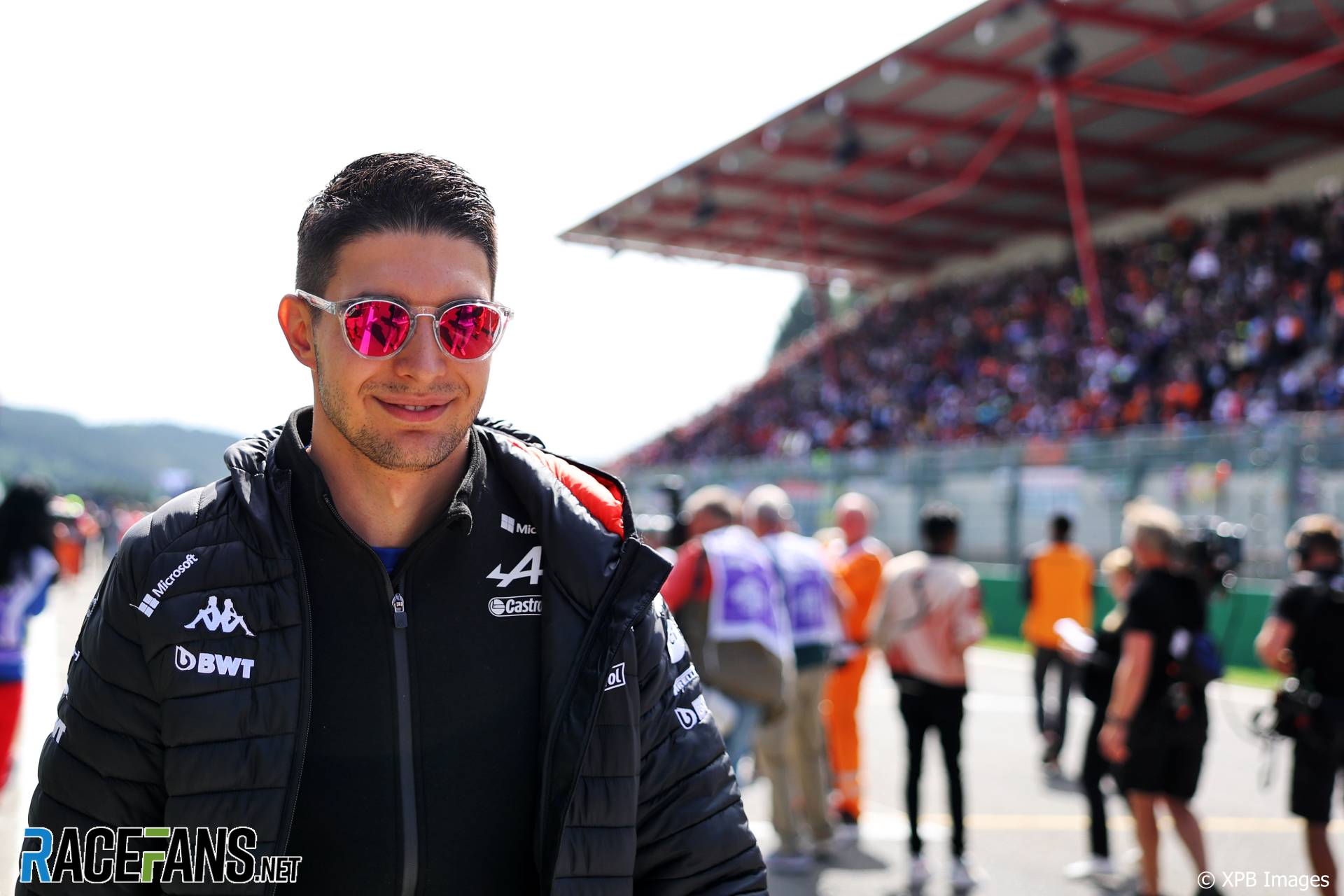 In the round-up: Esteban Ocon talks up Alpine’s Belgian Grand Prix weekend after their biggest points haul of 2022

Esteban Ocon has picked out last weekend’s Belgian GP as Alpine’s best of the season and his best since joining the team in 2020.

The 2021 Hungarian Grand Prix winner was fifth-fastest in qualifying at Spa-Francorchamps but grid penalties meant he started 16th. He made his way back up to seventh by the end of the race – with a three-wide pass down the Kemmel Straight on the way – while team mate Fernando Alonso finished fifth from third on the grid.

“I think it’s been our best weekend of the year so far and probably since I joined the team,” Ocon said. “I think the update that we brought here, how the car was performing, definitely there is no comparison to how we were, even in Budapest.

“I’m very, very impressed, there’s still more tools for us to come, so that’s definitely giving us a boost of confidence for the rest of the year.”

Ocon added he was “really disappointed” that he had to start the grand prix from 16th, as “I knew we were going to be fast”.

Tsunoda coy on his Honda future but confident of 2023 seat

Yuki Tsunoda is yet to be confirmed as racing for AlphaTauri in Formula 1 next year, but the Red Bull and Honda junior driver does not have doubt that he will not retain his seat for a third season.

“I cannot say anything about that [Honda’s involvement in my future], but I know what things that kind of trigger or will trigger that upon next year’s contract.

“For the moment I cannot say [details], just have to drive. For myself, the things I can do now is just to focus on myself and just make the results.”

The Japanese driver is currently 16th in the standings, and has not scored since May’s Spanish Grand Prix.

Jake Dennis will continue to race for Andretti Autosport in Formula E next season, the first of the series’ Gen3 era.

For the 2022-23 campaign, Andretti will switch from BMW to Porsche for powertrains and Dennis is the first driver to be confirmed as racing for the team next year. He has won three races and claimed three pole positions in his first two FE seasons with the team, and had been courted by rivals before electing to remain with the Anglo-American outfit on a new multi-year deal.

“I started my FE journey with Andretti and I’m excited to continue to work with the team that has continued to support my career in this series,” said Dennis. “Season nine with the Gen3 era is an exciting time for all teams, and for us in particular with the new relationship with Porsche supplying the powertrain.”

David Schumacher, son of grand prix winner Ralf and cousin of current F1 racer Mick, will return to the FIA Formula 3 grid at Zandvoort this weekend with Charouz Racing.

The DTM driver has already been called up by the team once this year to race, at Imola, and will be a stand-in again as Charouz’s recent signing Christian Mansell has to return to his Euroformula campaign which has a clashing round.

”Imola [was] a difficult weekend but we definitely had the pace, so I’m really positive that we’re gonna have a great potential at Zandvoort too,” Schumacher said. “I know the track from last year and that could be a little advantage, also given that the weather situation could be variable and open different scenarios.”

'What started in June as private conversations between Ganassi officials about his desire to break away from CGR at season’s end grew weeks later into a public, contentious back-and-forth – and finally a civil lawsuit that’s now entered federal court.'

'UPDATE 1.6 Released on August 31, 2022 for Steam and Epic Games Store. Console versions are currently in review with platform holders, with an expected release during the week commencing September 5.

'Shortly after driving the AlphaTauri AT03 in Belgian Grand Prix FP1, Lawson gave Formula Scout his first impressions of the experience in the paddock.

'It was really, really cool,' he buzzed. 'Of any of the tracks you can drive on, Spa has got to be one of the most iconic, especially with an F1 car. I enjoyed it a lot.''

'The 2022 F1 Esports Series Pro Championship, presented by Aramco, is almost here – and 10 teams and 30 drivers will once again battle for the titles over the coming months, beginning in just a few weeks and concluding in December.'

'There was another young talent who quietly negotiated a deal with his agent, Adrian Sussman, and will return to the team that gave him his IndyCar start in 2020.'

'The Swiss is not yet fully fit to race and will step back to be ready for Barcelona. The seat will be taken by Gillian Henrion, who raced the Tatuus T-318 race car in the 2020 FRegional European Championship. Back then, Henrion captured 17 points finishes out of 23 races on his way to P10 in the driver standings.'

The @MercedesEQFE journey ends here. And what a journey it's been. 💙⚡️ pic.twitter.com/bNIInQ30Bl

Introducing our line-up for the 2022 #F1Esports Pro Championship:

With an exciting combination of experience and fresh talent, we can’t wait for the season to begin. 💪

Tap below for more. ⬇️

🚨 EXCLUSIVE 🚨 | 🇬🇧 @JamieChadwick will test an @IndyLights car with @FollowAndretti next month as she explores opportunities for 2023!

The @WSeriesRacing star will try out a Dallara IL-15 at Sebring after the season finale.

🚨@redbullracing sim test & dev driver 🚀 After doing some days in the past years it’s time to scale it up!

A new and exciting route for me 2023 and onwards. More sim work at one of the coolest workplaces I can possibly think of! Don’t worry, I’ll still be racing myself 😎💪🏻 pic.twitter.com/jc2oOsyOai

🚨Driver Announcement @sebasmontoya58 will be part of our F3 line up for the #DutchGP
Sadly @hunteryeany is still not 100% recovered and will not join the team this weekend
We hope Sebastian will be able to adapt well to the car over the weekend and enjoy his @FIAFormula3👏 debut pic.twitter.com/WxbW4mhIpI

Mercedes revealed Lewis Hamilton‘s Belgian GP crash came in at 45G, and although it did result in him heading to the Spa medical centre is it was a visit he initially refused. While the impact force may not have been a surprise due to the rate of deceleration, that Hamilton did not immediately head to be checked up did raise eyebrows.

The incident was hard enough to set off the FIA-mandated G-force alarm, which means a mandatory medical check-up for the driver. The stewards issued a warning to Hamilton and by their own admission he wasn’t the only driver to have done so this season. Is it that hard to tell drivers that if they fail [to attend] a mandatory medical check they will get their licence suspendedTifoso1989