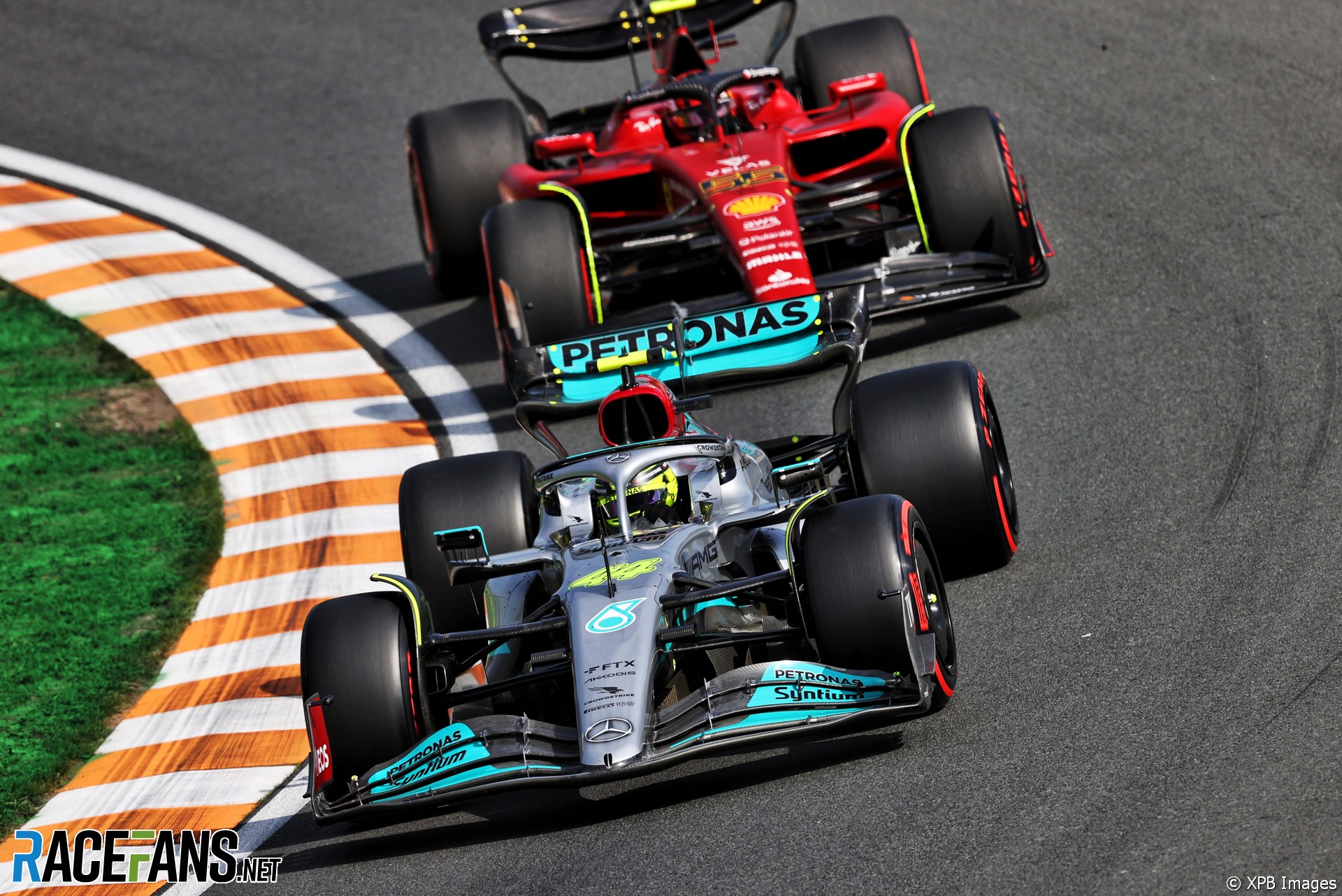 Max Verstappen arrived at his home race with a championship lead that stretched roughly as far as the journey from Spa-Francorchamps to Zandvoort, and with apparently unstoppable momentum from a hat-trick of wins.

With the last two of those wins coming from 10th and 14th on the grid, his orange army could be forgiven for expecting the world champion would put on another clinic in his own back garden and cruise to a comfortable victory.

But after two hours of running on Friday, Red Bull’s lack of pace meant there were a few disquieted Dutch fans leaving the circuit at the end of the opening day.

Verstappen’s morning session lasted barely 10 minutes before he pulled off the track with a suspected gearbox problem, possibly the legacy of a repair Red Bull made to his unit before the session began. When he eventually got a full hour of running in in the afternoon, he could do no better than eighth – not only almost seven tenths off Charles Leclerc’s quickest time of the day for Ferrari, but lagging behind Fernando Alonso’s Alpine and even Lance Stroll’s Aston Martin.

Behind the wheel, it was not a shock for Verstappen to see the time delta on his dashboard showing how much of a deficit he had to the Ferraris. “To be honest, while driving it I was not really surprised when I saw the lap time difference,” he said after the session.

Verstappen explained that the loss of track time had played a large role in the margin to the Ferraris – by far his largest on a dry Friday across the season so far.

“[It was] just missing out in FP1 on the soft tyre,” he said. “I think on that hard tyre you couldn’t really tell the balance, because we had such little grip on the tyre.

“Then you’re a session behind, so we went into FP2 and the balance wasn’t great. But, in an hour session, you can’t really change the car a lot. So we just tried to deal with what we had and that wasn’t great today. But we’ll have the night to look into things. And for sure we can do better than this.”

Verstappen’s performance alone could be dismissed as being ‘one of those days’ for Red Bull if it was not for the fact his team mate Sergio Perez was even further back from their rivals – almost a second slower than Mercedes in first practice and even further away in the second. However Perez had a more conventional explanation for why he had not been further up the order at the end of the day.

“I got a lot of traffic,” he explained. “I got one of the Ferraris on my fast lap and I couldn’t get a proper read on my soft tyre, unfortunately. It was going to be a massive shunt there.

“Then on the long run, degradation seems to be pretty high. It will be interesting to see what we are able to do with the strategy, but we certainly need to improve for qualifying tomorrow.”

While Red Bull struggled, Ferrari and Mercedes both looked comfortable and quick around the four-kilometre course. But Leclerc – quickest of all – was not getting too excited about being far faster than Verstappen on Friday.

“I think Red Bull didn’t have a very clean day, so it’s still to see how well they are they are going here,” he admitted. “I think they had a reasonably good long run. So we need to focus on ourselves, try to maximise our car for tomorrow. But it’s going to be close for sure.”

Team mate Carlos Sainz Jnr – who was so close to his team mate’s best lap time to almost be identical to it – seemed far more energised by his Ferrari’s pace and, crucially, his car’s balance.

“It’s great to be back to feeling competitive, being there at the top of the and for all weekend,” Sainz said. “Also the car gave me good confidence, so I’m optimistic going into the rest of the weekend but also cautious because I know everyone can suddenly find two-tenths and beat you.”

Ferrari may have finished Friday on top with both cars, but Lewis Hamilton’s Mercedes and Lando Norris’s McLaren were both just a tenth away from them. After Mercedes endured a horrible Saturday just six days ago in Spa, Hamilton was hungry to see the team gain even more as they head into Saturday.

“It’s been a decent start to the weekend,” he said, “we’ve landed in a much sweeter sport with the car, just being a very different track.

“It’s still a work-in-progress, we aren’t that far behind which is great to see and the car doesn’t feel too bad so we’ve got to keep chipping away. This track is a lot more aggressive on the tyres and we could feel some bouncing here and there but if we can make some progress overnight, which we normally do, then let’s see what’s possible tomorrow.”

With question marks remaining over just how difficult it will be to pass at the renovated Zandvoort circuit, and the front of the field so close in Red Bull’s potential absence, Saturday’s qualifying session could prove one of the most critical of the year. And with traffic proving such a problem for teams once again around the compact course, it could be a very stressful qualifying hour for teams and drivers alike.

Even early in second practice, the 20 drivers were already tripping over each other as those on hot laps tried, often unsuccessfully, to find clear track and navigate around their peers on out or cool down laps. Hamilton and Sebastian Vettel were both hauled in front of the stewards for a talking-to after getting in the ways of Sainz and Norris at turn 13 and are highly unlikely to be the only ones come the end of tomorrow.

Similarly, drivers are at the mercy of the red flags this weekend. Both the Formula 2 and Formula 3 qualifying sessions on Friday were interrupted by red flag stoppages that compromised different drivers depending on where they were on the circuit when the hazards emerged. After finding the gravel at turn 11 in practice, Daniel Ricciardo admitted it was too easy to find yourself leaving the road if you made the slightest error on a lap.

“Once you go a little bit off the line, it’s the sand,” Ricciardo summed up. “It reminds me a little bit of Bahrain’s track – it’s tricky, plus the wind, but the same for everyone.”

Even with an elongated final DRS zone along the banked final corner for this weekend’s race, there is no guarantee that passing on Sunday will be any easier. Which means – as Sainz observed – with Red Bull’s status at the front looking in question, Saturday’s qualifying session has all the ingredients to be a thriller.

“McLaren, Mercedes, Red Bull, [Ferrari] – we are all in three-tenths of a second,” he said. “That, I’m sure, will make things very, very tight going into tomorrow. And exciting.”