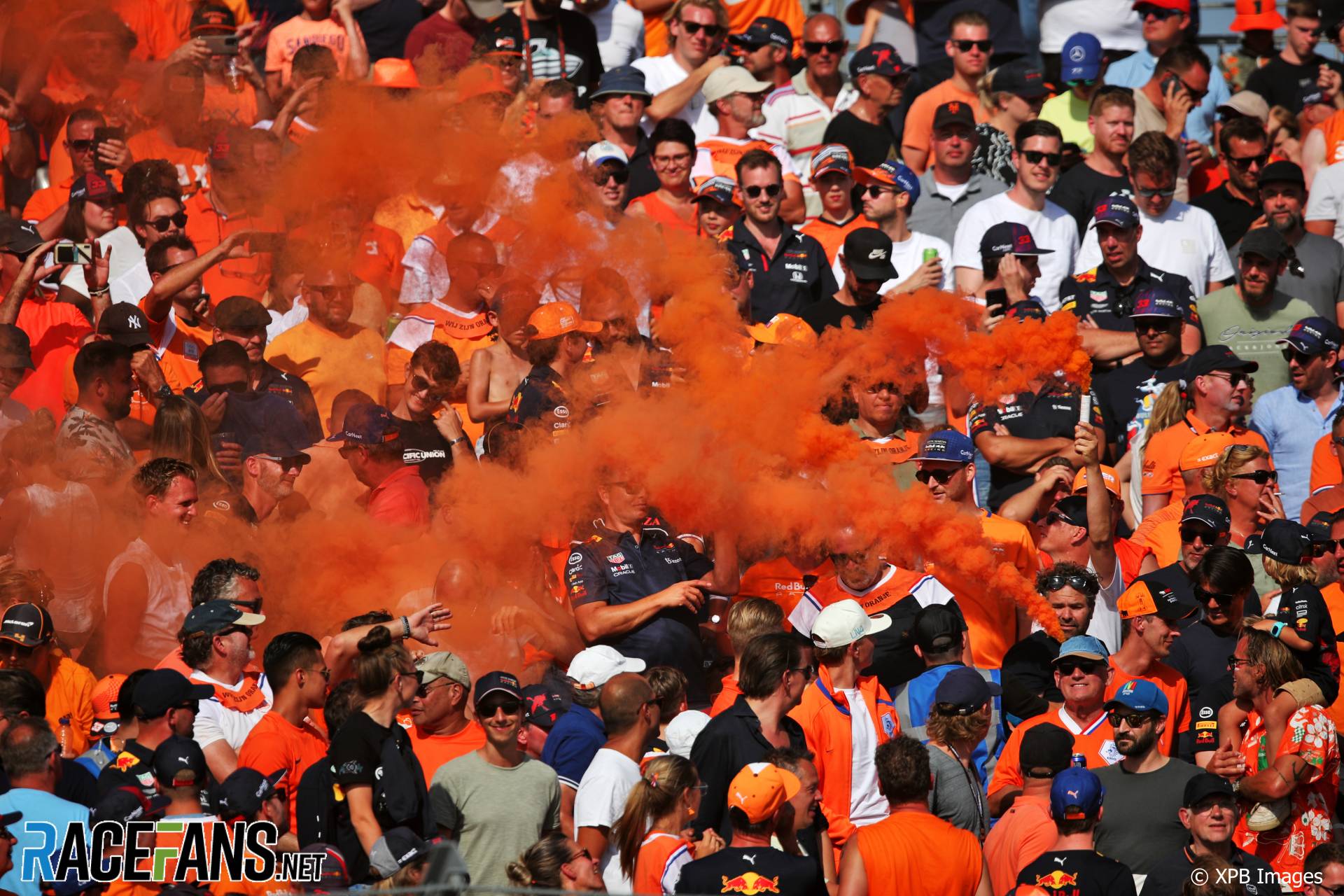 Formula 1 drivers say the sport needs to do more to ensure fans do not endanger their safety by throwing flares onto the circuit.

Two flares landed on the track during yesterday’s qualifying session at Zandvoort. At least one fan was ejected from the circuit for an incident involving a flare.

Drivers discussed the safety dangers of flares and the smoke they generate in the briefing ahead of this weekend’s race. Alpine’s Esteban Ocon said the brightly coloured smoke is “part of the atmosphere” but admitted “it’s not great to see [them] on the track.”

“Nothing should be thrown,” he stressed. “We’re driving at 300kph, so it could be dangerous to hit something through the straight line.”

Nicholas Latifi said the smoke created by flares has been a growing problem during races.

“Obviously we don’t mind it in certain situations. I would say specifically in qualifying and at the start of the races, even during the race is not the greatest.

“Spa was probably the first time, and I think a lot of other drivers commented the same, it actually confused whether there was a car off ahead of you or whether it was just an orange flare. Most of the time I find it is a very distinct orange, so you know that’s a flare, not gravel. But in Spa there was a few times I was like ‘has someone gone off in front and there’s just not a yellow flag?’ You don’t exactly know.”

The problem is more acute at Zandvoort, says Latifi, because the fans are much closer to the track.

“It’s not ideal, especially on a track like this where everything is very close. At Spa, Red Bull Ring, everything’s so much further away from the track, the grandstands.

“So I think the fans need to behave a little bit because I remember at the last lap last year when they lit the flares, you couldn’t see anything in the chicane at the end. And again, if there’s still a race going on behind then, it could be quite dangerous.”

Fans were warned not to bring flares into the circuit ahead of the race. Latifi said it’s not realistic to ensure none of them bring flares in, but wants tougher action against those who do.

“Maybe there needs to be some, maybe not stricter security checks because you can’t security check 100,000 people properly, but stricter consequences if someone’s seen doing that,” he said.

Daniel Ricciardo agreed tougher action should be taken against those who throw flares onto the track. “I 100% agree that the person should be kicked out,” he said. “Probably more but at the very least.”

However his team mate Lando Norris doubts there is much more that can be done to deter spectators from lighting flares.

“I heard he got kicked out, the guy, that’s the only thing you can really do,” he said. “I heard they’re trying to limit flares actually getting into the track and give specific times of when they can actually light them. But, we’re in the Netherlands and they’re drinking a lot and having a good time so in a way you don’t want to blame them.

“But if they’re like metal canisters, which I think a lot of them are, then if it gets thrown up or something, then it can be dangerous. They’re trying, I think FIA have discussed it already and they’re limiting as much as possible.”

Besides the obvious safety hazards of flares landing on the circuit, there is an additional concern they could be used to influence the outcome of the race. If the track is neutralised due to a flare during the race, as was the case during qualifying, the resulting disruption could give teams the opportunity to make quick pit stops under Safety Car conditions or similar.

After qualifying Mercedes team principal Toto Wolff was asked whether he was concerned the throwing of flares yesterday could have been timed to target Lewis Hamilton, following his rivalry with local favourite Max Verstappen last year. Hamilton passed by Tarzan shortly after the second flare was thrown during qualifying.

“Clearly the flare is the more dangerous thing because if such a can hits you, we’ve seen that in the past, it can have lethal consequences and the halo wouldn’t help you with that,” said Wolff.

“We looked at the camera angles when Lewis was going through the pit lane. I don’t know if somebody threw it at him, but it happened before he actually was at that point.

“So again a few idiots and I hope that the organisers are having a grip on it with the security.”