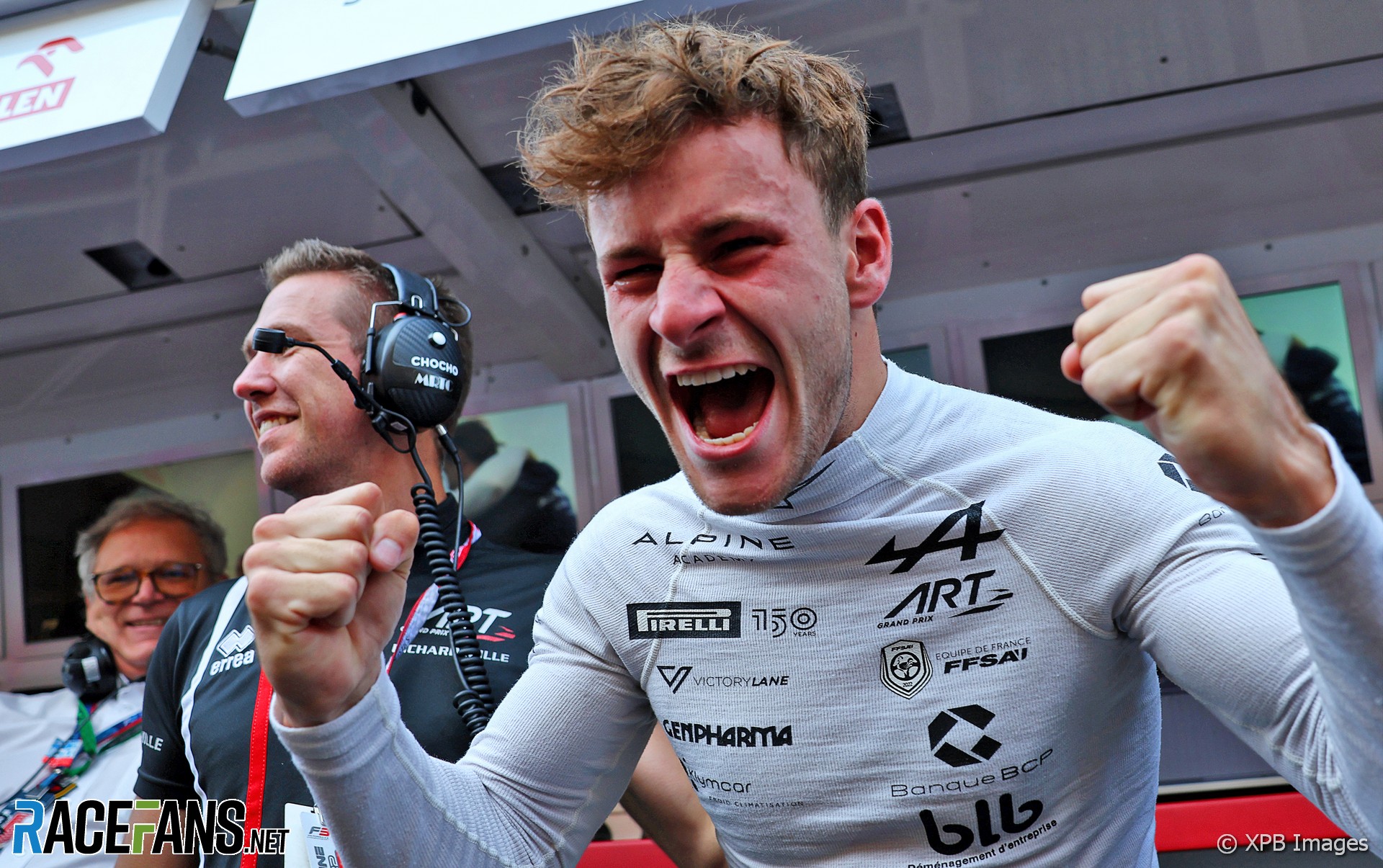 Victor Martins endured an agonising 26-minute wait while stewards deliberated the Formula 3 title outcome, after the final race was stopped early and abandoned.

The ART driver went into this morning’s season finale with a six-point lead. He was in third place behind title rivals Zane Maloney and Oliver Bearman, but poised to win the title, when the race was red-flagged.

“When I saw the Safety Car, I already thought about it like, ‘please, no Safety Cars during that race.'” Martins recalled. “I knew the job was done to stay third, even if I was not winning, it was fine.

“I have been through that many years in the past where I always wanted to win and I lost the championship because of that. So I just wanted to keep P3 and then there was the red flag.”

However while the drivers waited to learn the outcome of the race Martins discovered he had been given a five-second time penalty for track limits violations, which put his race position in doubt and his championship potentially in jeopardy.

“I was trying to stay focussed, not trying to think about anything, how I would need to approach the restart. I was trained to switch off, to not think about what was around me, who was behind me, also what position I needed to be in. I was on a mode that I was going to look ahead, going to make some moves because when you make some moves you kind of defend yourself from behind also.

“No one told me [about the penalty]. I saw it from the mechanics, my brother they were starting to look out on the phone and see the five-second penalty. At first I got really upset and angry at my team, to be honest.

“If I’m honest, in this moment, you kind of react badly and instinctively. So I would say I was a bit angry at why I didn’t know before that I had some track limits because I think they they told me that that was also an issue.

“I think the FIA took a lot of time also to make it show on the TV that I got some track limits [penalty]. So in the end, I think the last [track limits violation] I probably did was already too late when the team told me. So it was was just a horrible moment.”

Martins admitted he feared a repeat of the controversial conclusion to last year’s Formula 1 season, when Max Verstappen passed Lewis Hamilton after a last-lap restart to win the championship, if the race resumed. “I was like, ‘no, it cannot happen.’

“If it was restarting the first thought I had was last year between the Verstappen and Lewis – and I’m supporting Lewis. So I was like, I don’t do the same as Lewis, I keep the championship. Whatever happens, I want to win that one.”

Martins, now an Alpine junior, has not always had a straightforward career. He left their junior driver programme previously, when it was still branded by Renault, then rejoined after winning the Formula Renault Eurocup in 2020.

“It’s making me realise even more that I’m champion today [and] it feels even better compared to if I had an easy way to the title, for sure,” said Martins. “I have been through a lot of things, a lot of hard moments also on myself, where I had many doubts, where I wasn’t doing the right job, I was losing some championships for nothing.

“Today, if I was losing the championship, I don’t know how it would have been, but I’m sure I would have faced the wall and become stronger. But I feel that to get it, I will trust differently how things went.

“Even if it’s not going in your way – like today was, to be honest, at some points – I said ‘anyway it’s over, it’s done, I will not be the champion.’ And to get it, it’s making me hope for a better future and maybe an easier one.

“But I want to say to myself, even though if it’s hard, I will just go around the corner, around the issue, around the problem like I have done in the past. And for sure, it is amazing to to get it.”