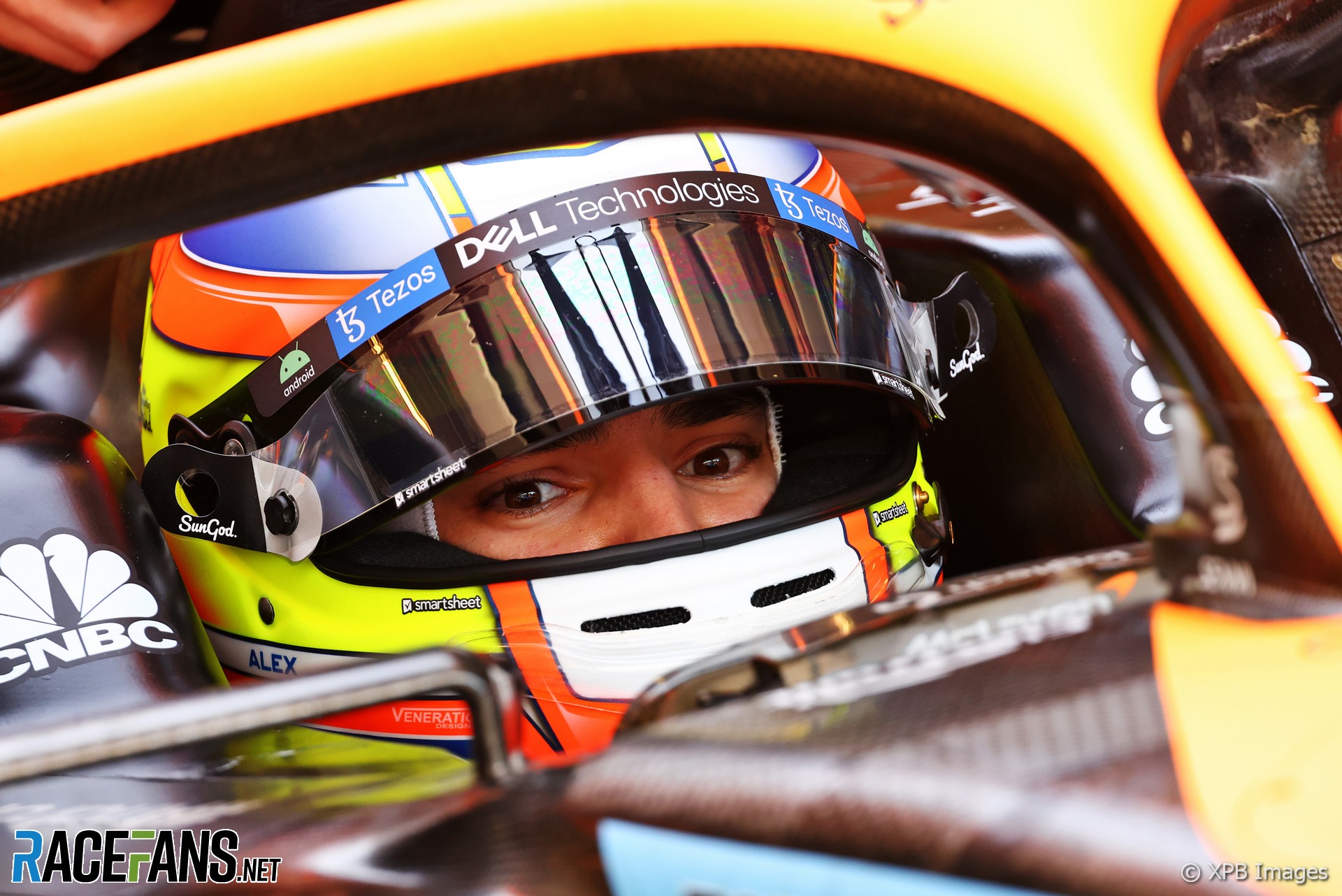 Alex Palou was astonished by his first experience of participating in an official Formula 1 practice session with McLaren yesterday.

The 2021 IndyCar champion, who has driven McLaren’s 2021 F1 car twice before, said the sheer performance of the car was just one aspect of the experience which impressed him.

“They are really, really different,” Palou told media including RaceFans at Circuit of the Americas. “It’s like another league.

“But obviously it’s everything, right? Like, the team size is crazy compared to an IndyCar team. The budget as well. We’ve been racing in IndyCar with the same chassis for the past 10 or 11 years, and they change it every two years with updates. So it’s very different.

“Obviously this car has a lot more speed, but I think as a racing driver you get used to the speed, it’s more the capability of the car to with the downforce to go fast in the corners, to brake so deep, it’s just insane.”

Palou took over Daniel Ricciardo’s MCLA36 for the first hour of running yesterday. He said it was “a dream of mine” to drive an F1 car but “it was something different to be on an official practice.”

“It went by really fast,” he added. “I thought it was going to be a bit longer, but it was only an hour. It was amazing.

“I think we did quite a lot of work, everything that the team needed at the beginning and then it was more for me driving and getting comfortable. So I’m super, super happy.”

Palou has previous driven in single-car test sessions. Yesterday’s appearance brought the added complication of up to 19 other cars on track at the beginning of a competitive race weekend.

“Here obviously you have the traffic, you don’t want to meet anybody else,” he said. “And you have a car that not yours, obviously, so I was trying to take care of the car, trying to not get in trouble with people that it’s going to race this weekend.

“This track, I think it’s pretty awesome for an F1 car, especially sector one, super-fast. And it was beautiful to drive.”

Palou had to be told to rein in his late-braking at times as he explored the limits of his car. “I just felt that the car was capable of so much that I just overshot it in some places,” he explained.

“Which I think is good, it’s better to overshoot and then back it off if you only have an hour. And I knew we only had a set of tyres so I had to do everything in two laps and couldn’t wait a lot, so that’s probably why.”

As he didn’t have time to do a lap on the soft tyre compound, Palou set his best time on mediums and was over two seconds off team mate Lando Norris. However performance runs were not the goal for the day.

“I think just more laps and getting obviously another set of tyres at the end would have helped,” Palou said. “But our programme today was not to go fast, it was to get data for the team at the beginning, which we did. We’ve got everything, [then took] all the sensors off after and then we focussed on myself.”

The 25-year-old raced in Europe before moving to Japan’s Super Formula series in 2019, where he finished third in his first season and took one win. He said that series’ car was closer in handling qualities to an F1 machine.

“It’s closer to F1 than an IndyCar is,” said Palou. “But that was a long time ago. I learned a lot in my IndyCar career since then. I just got more stuff from IndyCar than Super Formula.

“But they are closer, they both are lightweight, lots of downforce. Super Formula was lacking a lot of power, but still they are closer series for sure than IndyCar, as a car.”

However Palou said he is not seriously entertaining the prospect of a move into F1 as he seeks to repeat his IndyCar title-winning success.

“Obviously as a racing driver that likes motorsport, F1 is where you want to go. Throughout my career I’ve realised that F1 was not a place I could really achieve and I went through IndyCar and we achieved that.

“Funnily enough, getting that IndyCar championship gave me the opportunity to be here today. Which, I take it, I embrace every single second of it. I’m not chasing it. Obviously, if somebody gives me a ride, I’ll drive it. That’s the ultimate dream.

“But it’s not that I’m focussed on. I have a career in IndyCar, we’ve been successful and I want to get as many championships as possible. But there’s a car, I’ll drive it.”