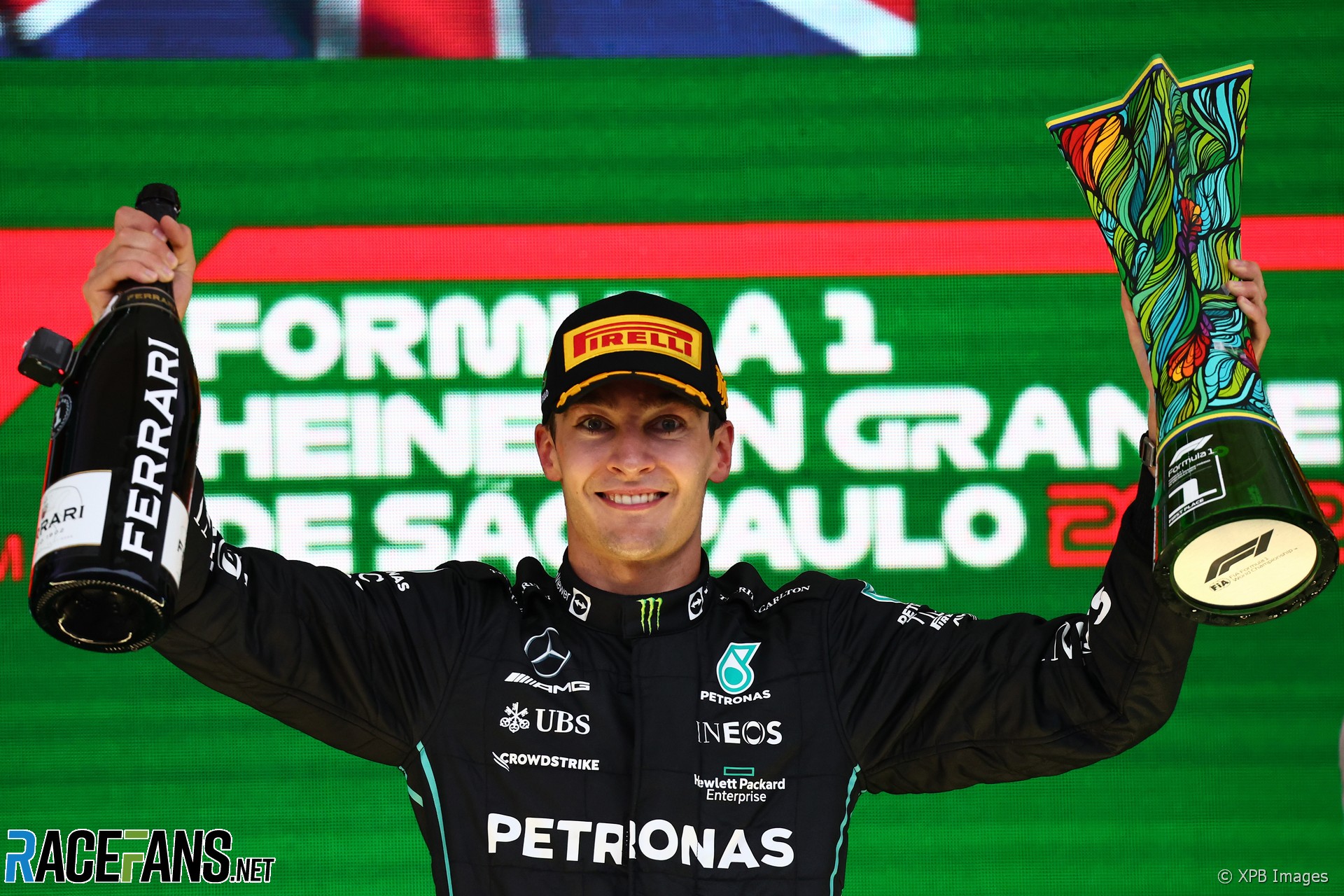 Russell converted his pole position to lead the majority of the race and take victory, while Hamilton recovered from an early clash with Max Verstappen to take second place. Carlos Sainz Jnr finished third, ahead of Ferrari team mate Charles Leclerc.

When the lights went out, Russell got away off the line well and held onto the lead ahead of team mate Hamilton. Verstappen slotted into third place and was lightly kissed by team mate Sergio Perez behind through turn one, while Lando Norris jumped into fifth after passing Charles Leclerc.

Through the middle sector of the opening lap, Kevin Magnussen was clipped by Daniel Ricciardo entering turn eight and was sent spinning. As the Haas slid back across the track, it struck Ricciardo’s McLaren, sending it into the tyre barrier and both drivers out of the race. The Safety Car was deployed while the two cars were cleared.

The race restarted at the start of lap seven, with Russell waiting until on the starting grid to launch up to racing speed. Verstappen tried to pass Hamilton through the Senna ‘S’ but the pair collided at the apex of turn two, dropping Hamilton down to sixth place and forcing Verstappen to pit for a new front wing. Further around the lap, Norris and Leclerc clashed into Ferradura, sending the Ferrari spinning into the tyre wall. Despite the accidents, all cars continued and the race did not require a second Safety Car intervention.

Russell now led Perez by under two seconds, with Carlos Sainz Jnr promoted up to third after Norris and Leclerc collided ahead. Verstappen rejoined the race with a new front wing in 17th, ahead only of Leclerc. The stewards deemed him responsible for the collision with Hamilton and handed him a five second time penalty, while Norris received the same for the clash with Leclerc.

Hamilton passed Sebastian Vettel and Norris to move back up into fourth place, which became third when Sainz became the first of the front runners to pit, taking a second set of soft tyres. Perez fell to over three seconds from Russell out front until pitting at the end of lap 23, switching to the medium compound. Mercedes called the leader in to respond a lap later, getting him back out ahead of Perez and behind Hamilton, who was yet to stop.

Hamilton eventually pitted for mediums at the end of lap 30, handing the lead back to his team mate. Russell’s lead was now extended to around five seconds, with Sainz three seconds from the Red Bull and Hamilton catching the Ferrari. Sainz pitted just after half-distance for mediums, moving Hamilton up into third place who began chasing down Perez ahead.

By the start of lap 44, Hamilton had caught the Red Bull. One lap later, Hamilton used DRS along the pit straight to slipstream by Perez and into second place once more. Perez pitted for mediums but was covered by Mercedes who brought Hamilton in for soft tyres. Not long after, Russell was brought in to switch back to used soft tyres for the final 21 laps to take him until the end of the race.

On lap 53, Norris pulled off track on the exit of Bico de Pato, triggering a Virtual Safety Car. Sainz pitted and switched to soft tyres, dropping to fourth, before the VSC was upgraded to a full Safety Car.

The race restarted at the start of lap 60, with Russell leading his team mate Hamilton and Perez in fourth. Perez came under intense pressure from Sainz, who eventually used DRS to get through into Descida do Lago, with Leclerc following his team mate through a lap later.

Russell held a lead of just over a second to his team mate and maintained his advantage over the final ten laps, taking the chequered flag to secure his first career victory and Mercedes’ long-awaited first win of the season. Hamilton crossed the line behind his team mate to make it a Mercedes one-two, while Sainz completed the podium by taking third position, over three seconds ahead of his team mate Leclerc.

Fernando Alonso held off Verstappen in the final laps to claim fifth, while Perez finished second after fading over the final part of the race on medium tyres. Esteban Ocon finished eighth in the second Alpine, ahead of Valtteri Bottas in ninth, with Lance Stroll completing the top ten.