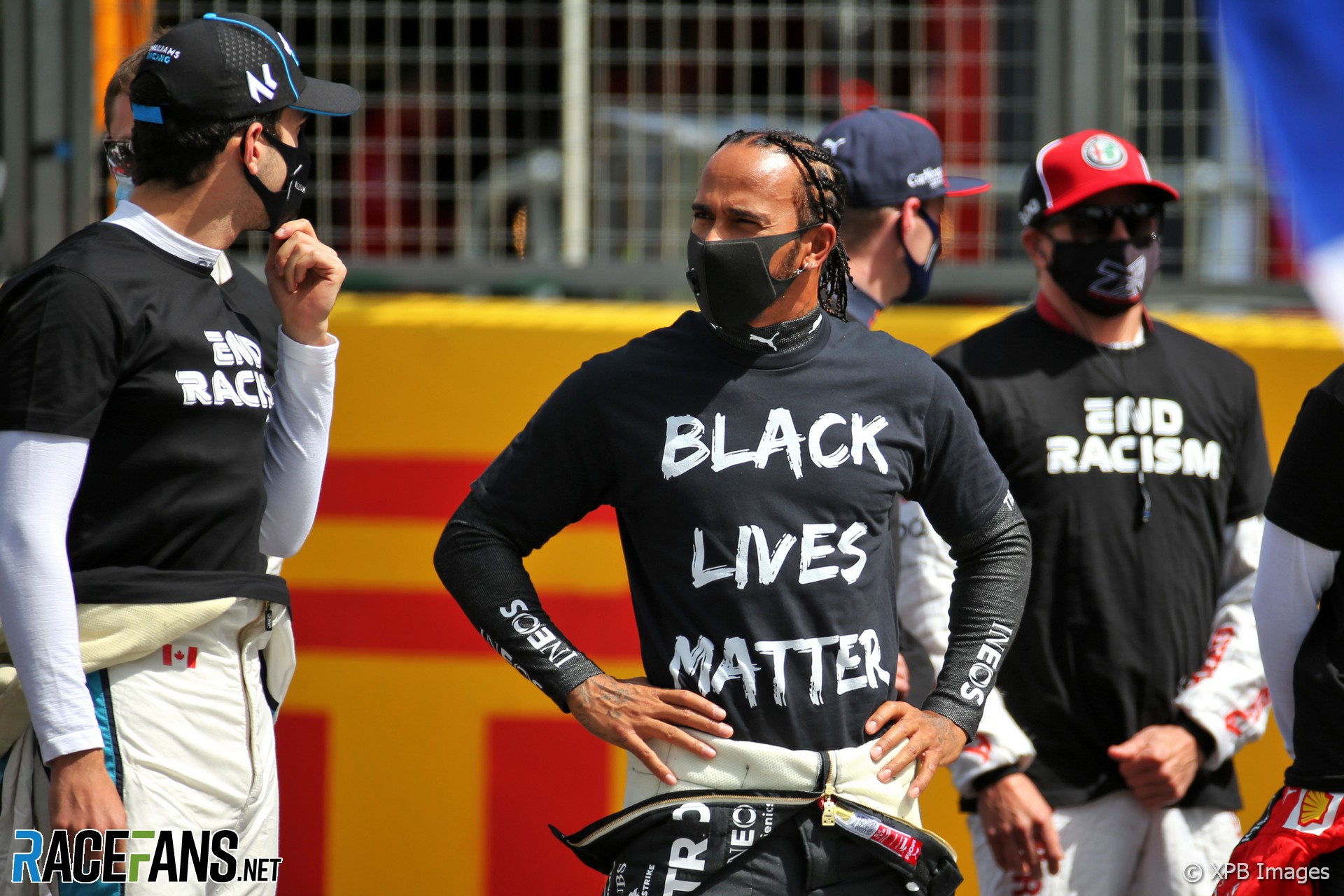 Lewis Hamilton has revealed more about the racism he faced growing up and how it drove him to push for greater diversity in motorsport, in an interview published this week.

In an hour-long discussion with Jay Shetty – an “internet personality, storyteller, podcast host and purpose coach” – Hamilton talked at length about the prejudices he faced growing up as a mixed-race child in Britain in the eighties and nineties.

“School was the most probably the most traumatising and most difficult part of my life,” Hamilton recounted. “I already was being bullied at the age of six. I think at the time, that particular school, I was probably one of three kids of colour, and just bigger, stronger bullying kids were throwing me around a lot of the time.

The abuse included “constant jabs” and racial slurs, said Hamilton. “The things that are thrown at you like bananas, or people that would use the ‘N-word’, just so relaxed. People calling you ‘half-caste’. Just really not knowing where you fit in. That, for me, was difficult.

“When you then go into, like, history class and everything you learn in history, there were no people of colour in the history that they were teaching us. So I was thinking, well, where are the people that look like me?

“I mean, in my school there was only around maybe six or seven black kids out of 1,200 kids and three of us were put outside the headmaster’s office all the time. The headmaster just had it out for us and particularly for me, I would say.”

Hamilton explained why he found it difficult to discuss the racism he experienced with those around him, including father Anthony and stepmother Linda.

“There were a lot of things that I suppressed because I didn’t feel I could go home and talk to my parents that ‘these kids kept calling me the N-word today’, ‘I got bullied and I got beaten up at school today’ or ‘I wasn’t able to defend myself’.

“I didn’t want my dad to think I was not strong. So if I had tears I would hold them back. If I had emotions, it would be in a quiet place.”

He discovered karting at the age of eight. It eventually put him on the path to becoming the most successful F1 driver of at all time, but to begin with it was an outlet for his frustrations. “It wasn’t really ’til I started racing that I was able to channel this emotion that I had into my driving,” said Hamilton.

“Superman was my favourite, I loved how he fought for the people and I loved how he did the right things and he was a really inspiring character for me. But again, no superhero was of colour. But you can still aspire to be someone if they don’t look like you.

“So I remember going to karate, I remember putting this helmet on and racing, it felt like it was my cloak. My superpowers would come out when I was driving. And I was battling with these kids and I was able to do things that they seemed to not be able to do as well. And that was my love.”

Hamilton’s biological parents split up when he was two years old. He described his dad as an “amazing figure” who helped him cope with the challenges he faced.

“One of my best friends, his dad was never there. I know there’s not many people that have separated parents and being shared between parents is not an easy thing: Some days with your mum and some days with your dad. My mum was the soft, loving parent. That’s where I really I feel like I learned a lot of compassion and empathy. I feel like I get it from her.

“My dad was that kind of stronger rock and also just someone that looked like me and he would say: ‘Do your talking on the track. Don’t be distracted by it. Don’t listen to what they’re saying. Do your driving on the track and show, let’s just be quiet and walk away winners.

“My dad was someone that also faced adversity through his life and he’s like, I want to do everything in my power to create a better life for my kid so they don’t feel or experience the things I have encountered him through my journey.

“But I think for me, it was also difficult. I’m biracial, so having a white mother, for example, and a black dad, I knew my dad would understand the racial slurs that are thrown at me, my mum couldn’t understand it. So I couldn’t really speak to my mum about it. She was loving, but she’s never been educated within it. She didn’t know anything about black history and slavery. So it was very difficult. But I had love there, which was the most important thing.”

Today Hamilton tries to use his social media posts to give encouragement to those who are going through similar experiences to his. “[When you’re] kids, you just want to enjoy yourself, you want to be included. And [when] you’re kind of outcast a little bit, it’s difficult for kids.

“So that’s why today if I’m posting something, I hope that when I do click that button, I hope that it is a positive wave for some of the kids out there that are being distracted by all this stuff that’s going on around the world.”

While he is embarking on his 17th full season as an F1 driver this year, Hamilton has only become outspoken about racial issues relatively recently in his career, particularly when the Black Lives Matter movement began following the death of George Floyd in May 2020. He said he appreciated the support of other drivers who joined him in ‘taking a knee’ before races that year and in 2021.

“I’ve tried to be create allies, like, in having the difficult conversations with some of them. I’m so grateful for, I’ve had a couple of them that took the knee with me in 2020.

“On that, my dad never let me cry as a kid. He said it was a sign of weakness. ‘Don’t let me ever see you shed a tear’. So I remember just holding back through those difficult times as a kid, holding back most of that stuff. And in 2020, I cried. I hadn’t cried for at least 10 years, maybe more. There was a lot of bottled up stuff that came up that I had not realised, I didn’t even know about suppressing a pain or a feeling.

“I remember kind of being on my knees thinking what is happening in the world? I’ve got to be outspoken, I’ve got to take that chance because if I don’t do it then no one’s going to do it. If I don’t take the knee, if I don’t let people like me know that I care and I hear you and I’m with you and I’m going to do something about it, I’m going to risk it all. I don’t care if my partners want to drop me because I don’t to be associated with this narrative. I literally let go of all the fear and that’s why I came so forward with it.

“I know it’s not easy for everyone to do that. But I would just want to really try to encourage people out there to be themselves, to speak out if they’ve got a problem, if they see something within their working environment or experiencing something, you’ve got to be outspoken about it. And there’s a right way to do it.”

Ahead of the delayed start to the 2020 season due to the Covid-19 pandemic, Hamilton decided he would make a gesture of support for Black Lives Matter, and was unwilling to embrace F1’s broader We Race As One campaign which incorporate social issues beyond racism.

“The first day I was going to take the knee, I remember I didn’t feel like I could tell my team,” he said. “I felt that they wouldn’t understand how important it is for me to do this. So I had my Black Lives Matter shirt hidden and I just wore it out there and I went ahead with it.

“The sport had made all these T shirts [with a] ‘We Race As One’ slogan and they gave these T shirts to everybody. And I was like ‘I’m not wearing that’. That’s not what this is about. And so this is what I’m doing.

“Afterwards my team were like, if you just told us we could have prepared better. But I had this fear that they would try and stop me, perhaps. But that was just a fear. They’ve been massively supportive through the whole thing.

“My hope was that kids would be watching and be like: ‘What is that? Why is he taking the knee? What does that shirt mean? What is going on dad, mum?’ And then the parents being in an awkward position having to explain it, maybe.”

He subsequently founded the Hamilton Commission which published a report on the lack of diversity within motorsport and is now working to promote it.

“What was really encouraging for me was when we started really getting into the whole diversity and inclusion, we did the research, out of 2,000 people in the team there’s 3% diversity. So since then we’ve been on this mission. The team have started new projects. We’ve discovered that the sport generally hires from one group of universities, which is not diverse. And if there are any young black students that go there, they’re twice as unlikely to be hired when they come out compared to their counterparts, and also paid less. So there’s all these things that perhaps people didn’t know.

“That just was interesting to experience that now. Now we’re working on a diversity charter that all the teams have to be a part of. And it’s not mine, it’s for the sport and it’s to encourage those teams because there’s still not any diversity within, if you look at Ferrari, they have hardly any. Most teams don’t.”

Hamilton is already starting to see signs of the change he hoped to promote in F1. But he wants it to become more obvious to those who do not work in the sport.

“When I go back to my team, to the factory, normally our marketing department wasn’t very diverse initially, and I walked in after the pandemic and I started seeing such a more diverse group of people. I was really quite emotional because I was like, oh my God, I’m starting to see change. But you don’t see that on TV.

“So when I talk to the bosses of the sport, I’m like, there’s all white men and me facing the camera at the start of the race – where are the women? Where are the people of colour. We’ve got to be showing so the young kids are watching and they’re like, ‘oh, there’s a place for me there. I can be there, I can be an engineer, I could be a mechanic or whatever it may be. And even for young girls, I can be a racing driver or an engineer or strategist or whatever’, So representation, is so, so key to inspiring the youth.”