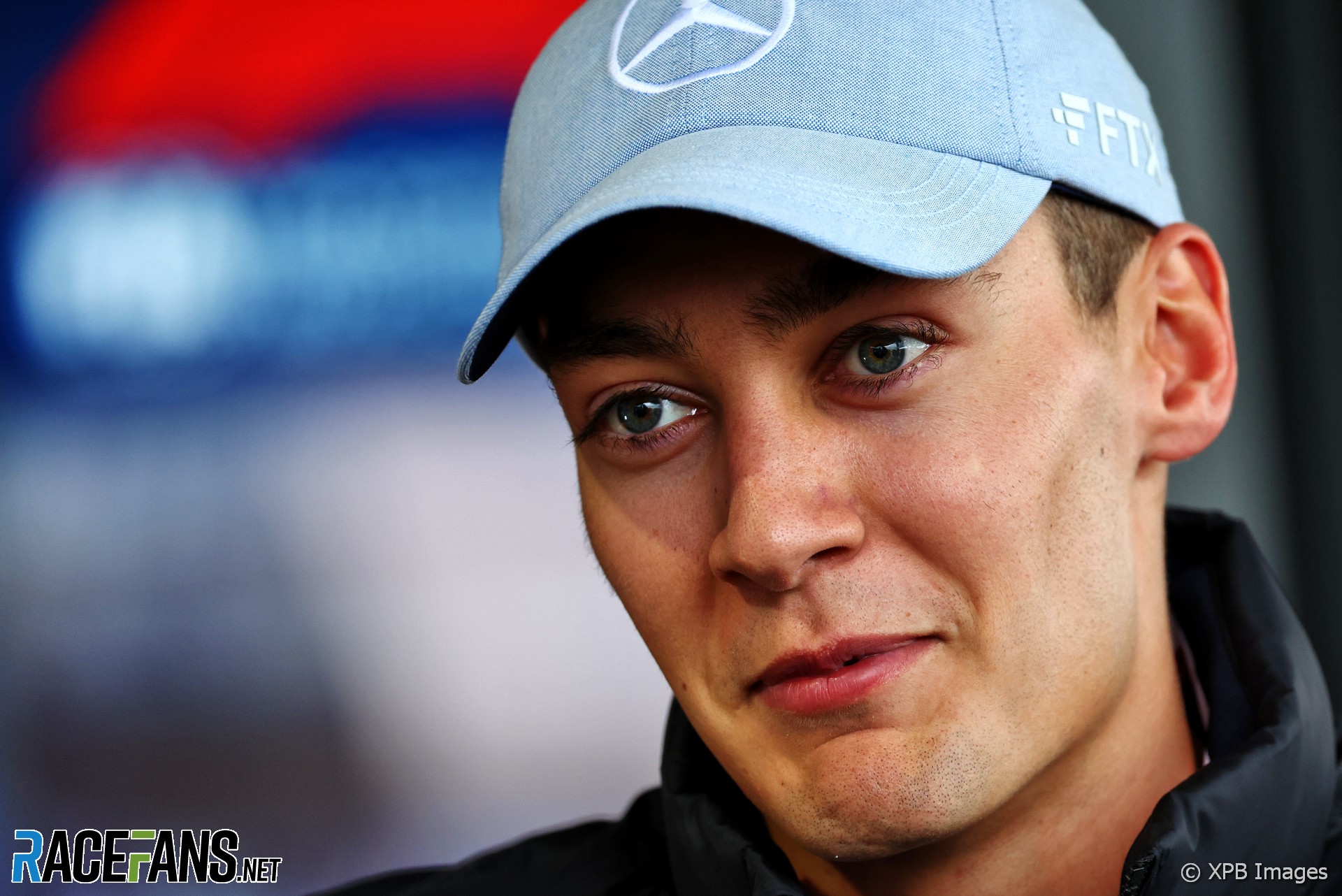 A stellar Formula 2 campaign in 2018 helped George Russell convince Williams – and his backers Mercedes – he was ready for a promotion to Formula 1 even before the championship was decided.

The 20-year-old already had six wins from the first 22 races, and might have had more had the series’ new-for-2018 hardware been more reliable in the opening races. He asserted himself over a competitive field including Lando Norris, who earned his promotion to McLaren the same year, and Alexander Albon, who took the title fight down to the final round.

Russell’s karting successes included victory in the 2012 CIK-FIA KF3 European championship with three wins from four starts, plus one no-score when he was taken out by a rival. He graduated to single-seaters in 2014.

He came from behind in the final round of the BRDC F4 championship to beat Arjun Maini to the title by three points with victory at Snetterton. One week earlier he also impressed as a wildcard entry in the Formula Renault Eurocup, beating newly-crowned champion Nyck de Vries to win the season finale at Jerez. Russell rounded off a successful first year in cars by winning the McLaren Autosport BRDC Award.

A promising first weekend in the European Formula Three championship with Carlin suggested he could be a title-contender. Russell won the second race of the season at Silverstone, but although he scored consistently Charles Leclerc, who took his first F3 win the same weekend, comfortably beat him to top rookie honours at the end of the year, while series veteran Felix Rosenqvist took the title.

Russell returned for a second season F3 with new team Hitech against a substantially depleted field and the growing might of Prema. Lance Stroll served notice of his intentions by winning the opening race, and by the fourth round of the season he and Prema were increasingly stamping their authority on the championship. Russell managed a pair of wins and third in the standings.

A move to the F1 support bill the following year brought more success and the interest of Mercedes, who appointed him to their junior team. Joining the crack ART squad as part of a four-man assault on the GP3 title, Russell’s knack for converting pole positions into victories made him an irresistible championship prospect. He ended the year with an emphatic 79-point margin over his three team mates, led by Jack Aitken.

As well as making his F1 test debut for Mercedes, Russell made his first official F1 race weekend appearances for their customer team Force India. As he neared the end of his successful stint in F2 Russell grabbed a multi-year deal to drive for another Mercedes customer, Williams.

Russell’s Formula 1 debut got off to a less than ideal start as Williams were unable to complete their new car in time for the start of the 2018 season. Russell and team mate Robert Kubica missed valuable testing time, and once the car did run it quickly became clear the FW42 was horribly uncompetitive, and the pair were doomed to a year at the back of the field.

Despite obvious problems with the car, which was often a second or more behind the next-slowest, Russell distinguished himself with his single-lap pace. As well as out-qualifying Kubica at every round he came within a tenth of a second of dragging the car into Q2 at the Hungaroring.

However Russell paid the price for slithering off the track during the rain-soaked German Grand Prix and falling behind his team mate, who went on to score Williams’ only point of the season

Russell started the year with Williams, who looked set for a step forward mostly by default of having very little room to go further back. Pre-season testing was much more successful, with Russell and new team mate Nicholas Latifi building up much more mileage than the previous, disastrous year. An entirely different disaster was to strike before the F1 season could begin, however, as the first race in Australia was cancelled and the calendar suspended due to the global coronavirus pandemic.

During the months of lockdown, Russell joined several other young drivers in building an audience streaming racing online and won F1’s Virtual Grand Prix championship. Russell had started the series relatively uncompetitive, unfamiliar with sim racing but was comparable to the professionals’ times by the end of the competition.

Once back to real-world racing, Russell showed his ability to get as much as possible from the Williams car by continuing his run of being unbeaten by a team mate in Formula 1 qualifying. He made nine appearances in Q2 but was unable to convert that into scoring points on a Sunday, his best chance being spoiled by an error that saw him crash behind the Safety Car at Imola and write a letter of apology to the team for the mistake.

The sale of Williams to Dorilton Capital had made it briefly look possible Russell would lose his seat there to Sergio Perez, however, the team confirmed he and Latifi would continue into 2022.

Russell remained a Mercedes junior driver during his time at Williams. When already-crowned champion Lewis Hamilton was diagnosed with COVID-19, Russell got the call to substitute for him at the top team. Williams gave him their blessing, promoting reserve driver Jack Aitken in Russell’s place.

Using an old seat from 2019 Abu Dhabi testing and race boots a size too small, Russell squeezed into Hamilton’s car for the Sakhir Grand Prix Despite having been set low expectations, given his lack of preparation, Russell was able to qualify second – just 0.026 seconds behind regular Mercedes driver Valtteri Bottas – on the Bahrain outer circuit.

He caused a stir in the race by immediately passing Valtteri Bottas and led much of the race in style. However a pit stop error by his team and subsequent puncture denied him the chance to score a shock win. Hamilton returned in time of the season finale in Abu Dhabi, so Russell ended the year back at Williams.

Russell remained at Williams for a third season in 2021, however following his Mercedes outing rumours swirled that he was under serious consideration for a full-time drive with the world champions.

As Williams refined its car into the more competitive FW43B, Russell became a fixture in Q2, and even made two appearances in Q3. He did himself no favours with Mercedes by colliding with Valtteri Bottas at Imola, however.

Two years on from their last points score, Williams enjoyed a windfall result in Hungary, where both drivers reached the points. Unusually, this came at the first weekend of the season where Russell failed to reach Q2. Although he sustained his unbeaten record against Latifi in qualifying up to this point, Latifi led him home on race day, the pair taking seventh and eighth after Sebastian Vettel was disqualified.

However Russell put in a star turn at Spa where, in a weekend marred by filthy weather, he stunned the paddock by planting his Williams on the front row. As the rain continue to pour, a farcical race took place in which the field toured around the track behind the Safety Car for three laps, after which half-points were handed out, Russell scooping nine for his second-place finish behind Max Verstappen.

Soon after that came confirmation Mercedes had appointed him as Bottas’s replacement for 2022, alongside Hamilton. He scored twice more at Monza and Sochi – the latter the scene of another excellent qualifying performance – to bring his season tally up to 16 points.

Russell’s first campaign with F1’s dominant force of the turbo hybrid era was a success, but came at a time when the team lost their competitive edge as new aerodynamic regulations were introduced.

The year started with a fourth place in Bahrain, albeit from ninth on the grid, and Russell finished fifth in Jeddah after qualifying sixth.

He picked up a first podium of the season in race three in Melbourne, but failed to reach Q3 in the next two races. Another podium and his first row two start occurred at Barcelona, but he didn’t qualify in the top three until the 13th event of the season at the Hungaroring where he claimed his maiden pole position and his fifth third place finish of the year.

The remainder of the season was more rewarding for Russell and Mercedes. He finished second at Zandvoort, making the grid’s front row at Monza and finishing third, qualifying second again in Mexico City and then putting Mercedes on the podium’s top step for the first time in 2023 at Interlagos.

Russell qualified third then passed Max Verstappen to win the sprint race. On Sunday he led 66 of the 71 laps to take victory, delivering Mercedes’ only grand prix victory of 2022.

Fifth place in the season-ending Abu Dhabi Grand Prix secured Russell fourth in the standings, marking the third time Hamilton had been beaten by a team mate over a season in his F1 career.