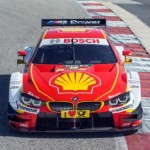 A group for fans of the DTM.

2015 DTM season kicks off with double-header