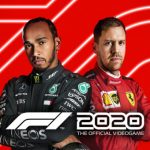 A place to discuss Codemasters’ F1 games, Gran Turismo, Forza Motorsport, rFactor, iRacing and everything else to do with virtual motorsport.

Which racing game are you playing the most at the moment?