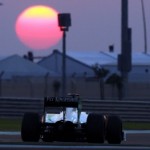 Group for fans going to the Abu Dhabi Grand Prix at Yas Marina.

Where to sit and where to watch at Yas Marina