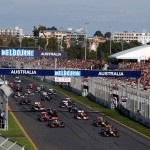 Group for fans going to the Australian Grand Prix at Melbourne.

Where to stay near Albert Park?