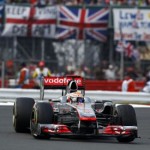 ‘Popping the question’ at the race