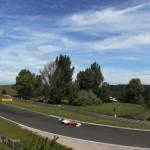 Group for fans going to the Hungarian Grand Prix at the Hungaroring.