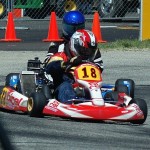 The group for fans of kart racing.

What are your Karting plans for 2012?