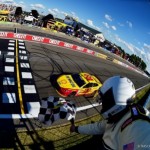 Group for fans of NASCAR.

Is it OK to use a racing driver's death for an advert?