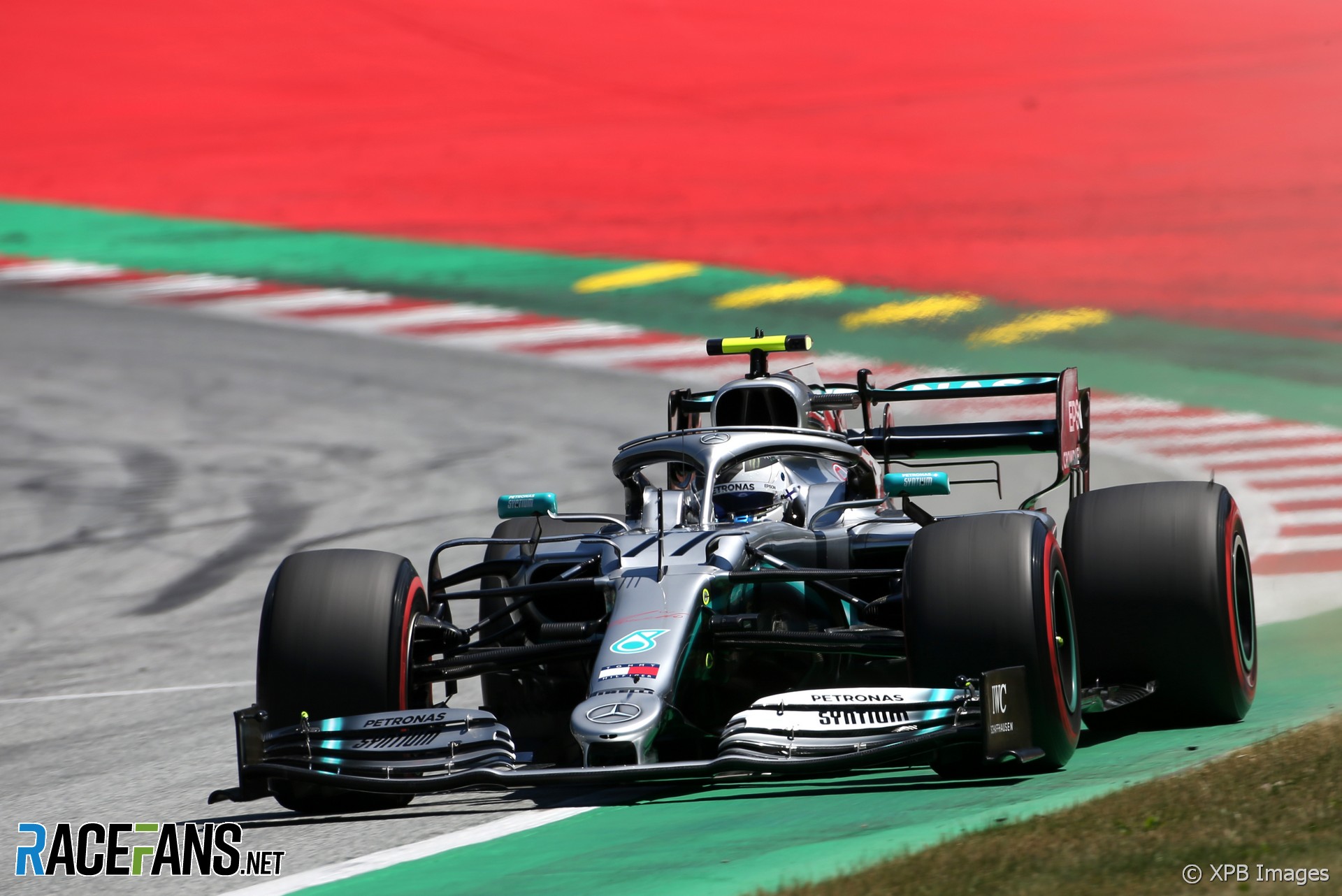 In Baku Mercedes tricked Ferrari into compromising Sebastian Vettel’s track position in Q3 by performing dummy practice starts when they sent their drivers out for their final runs.

But in Austria Ferrari got payback. As they prepared to begin their final runs Charles Leclerc dived past Valtteri Bottas, setting himself up for a run to pole position, and disrupting Bottas’s preparation for his final effort.

Several times this year we’ve seen the lengths teams will go to in order to ensure their drivers find an optimal position to begin their final Q3 runs while benefiting from the slipstream of others. In China, Vettel passed Verstappen moments before beginning his final Q3 run in order to ensure he started his last lap on time. Verstappen missed his chance to set a time as a result.

The situation in Austria was slightly different in that Bottas didn’t need to cut things quite as fine with Leclerc. However as he explained afterwards, mis-communication with his pit wall left him unsure about how long left he had to start his lap time.

“It was a bit of a messy Q3 in terms of traffic,” Bottas explained. “We left it already quite late for the first run and then there were some cars backing off and everything. The first one was still all good I think from that side. My second one everyone pretty much parked in the last sector.

“We did have a bit of an issue with the communications as well. The message for me was that it was going to be super-close but I would make it.”

When Bottas left the pits to start his final run he was initially told he was “tight on time”. This was partly because his team mate Lewis Hamilton had left the pits in front of him and dawdled slightly.

The urgency with which Mercedes told Hamilton not to waste time underlines how close they were cutting it to get both cars around to start their final lap times. “Lewis we can’t wait on time,” he was told hurriedly, “get going, get going.” Hamilton’s radio message indicated the time lost was around three seconds.

Mercedes updated Bottas on his progress around the lap by referring to where he should be relative to the “out-lap”. Ferrari, however, gave Leclerc similar information by means of a countdown in seconds, so at each point on the lap he would know how long he had to make it to the start/finish line.

This appears to be where the confusion crept in for Bottas. As he neared the end of the lap he was fairly safe in terms of his track position, but Mercedes were also growing concerned about Leclerc bearing down on their driver and springing a late pass.

That was exactly what Leclerc did, at turn nine. By then, Bottas had very little of the lap left to back off and ensure he wasn’t too close to Leclerc.

“After Leclerc went ahead of me then I was right behind him in the last corner, going super-slow,” Bottas explained. “[I was] a bit too close to him, got a very poor exit from the last corner so I lost already quite a chunk of time into turn one.”

He was also compromised by his relatively slow pace at the end of the lap, a consequence of having sped up too much earlier on to gain time. “The tyre prep wasn’t there with cruising around sector three. It’s been quite on the limit this weekend for us to get even the soft tyre to work for lap one. For sure for the last one I couldn’t get it into the sweet spot. So just a bit messy.”

Inevitably, Mercedes are already making plans to avoid a repeat of the slip-up which saw Bottas fall from second to fourth with his last run. “We already had a quick debrief and discussed about the communications and for sure there’s something we’ve learned today in terms of what kind of information I need that would help me.

“In the end when I crossed the line there was much more than 10 seconds still margin so I would have easily left a bigger gap a bit earlier, get a good head of speed out of the last corner and possibly warmer tyres.”

Bottas and Leclerc radio from the end of Q3